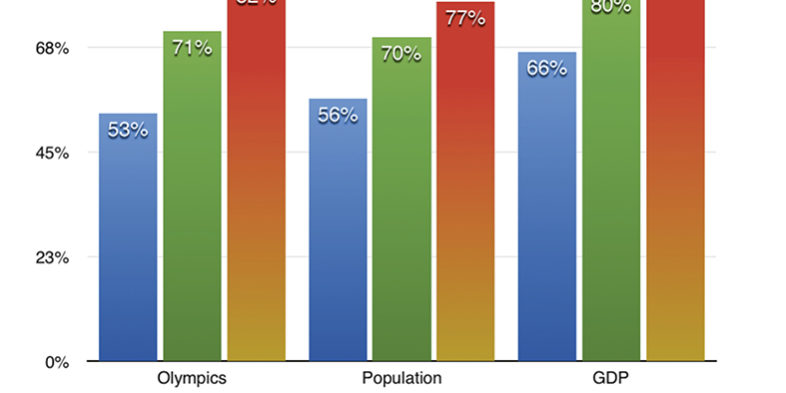 Jan Schoombee on the Pareto principle, comparative advantages, and the medal count at the Olympics

Vilfredo Pareto found in 1906 that 80% of the land in Italy was owned by 20% of the population. The Pareto principle (also known as the 80–20 rule) follows the same logic in that in any given system, the majority of output by value is concentrated in the minority of inputs by volume.

This holds true for business (top clients, top sales people) as well as for sports (top sporting nations, and within a nation the top sporting disciplines).

As a rough rule, for many events, roughly 80% of the effects come from 20% of the causes.

The recent Olympic Games illustrated this principle – with 10 nations grabbing over half of the medals and the top 30 nations over 80%. This is less concentrated than wealth, where the largest 10 economies control two thirds of global GDP, and trending quite close to world population, especially up to the top 20.

The largest 20 countries make up 70% of the people on earth, with the 20 most successful sport nations earning 71% of the medals.

But population is not a great predictor of Olympic success. Nine of the ten richest countries were in the top 30 Olympics medal-winning nations (India missing out), but only 5 of the 10 largest nations in terms of population had the same success (India, Indonesia, Pakistan, Nigeria and Bangladesh have large populations but are not on the Olympic medal list of honour).

The reason is obvious – Olympic success is expensive.  The Guardian newspaper places an average price of £5,5 million on each medal Great Britain won. Only the richest nations can afford to go broad in terms of achievements in a variety of different sports. The US medal table as an example is shown in figure.

The same trend can be seen for China, Germany and other richer states. However, there are outliers – smaller nations that punch above their weight. The success of Kenya in long-distance running and Jamaica in the sprint events are both well documented. These nations have world-class training programmes for these two separate focus areas, as well as investments, monetary incentives, and gifted athletes. In fact, they are great illustrations of specialisation and comparative advantages.

One could argue that greater returns would be achieved by other smaller nations sending more athletes in their specialised fields rather than a diversified field of athletes across many disciplines.

According to Investopedia,’ Specialization is a method of production where a business, area or economy focuses on the production of a limited scope of products or services to gain greater degrees of productive efficiency within an overall system. Many countries, for example, specialize in producing the goods and services that are native to their part of the world, and they trade for other goods and services.’ Also, this creates greater opportunity costs by not wasting resources on areas where you might not compete as strongly and not have a relative advantage. Investopedia continues: ‘Economies that realize specialization have a comparative advantage in the production of a good or service. A comparative advantage refers to the ability to produce a good or service at a lower marginal cost … ’

Since Kenya and Jamaica are well known, here is another example: Azerbaijan. Azerbaijan received just under 90% of their medals in combat sports, and within that category Azerbaijan has a clear strength in wrestling (see figure 4).

The same concentration is evident in Cuba, Kazakstan and Uzbekistan.

Is there perhaps a lesson for other countries that are higher up than these nations both in terms of GDP and population? Examples are:

Reaching a return on investments in sporting programmes is half of the story, and the contra argument is that it is not how many medals you bring home that matters, but how you play the game. Baron Pierre de Coubertin, founder of the modern Olympics, said: ‘The important thing in life is not the triumph but the struggle. The essential thing is not to have conquered but to have fought well.’

The spirit of the Olympic Games cannot be quantified in the medal count. Nonetheless, behind these medals are the human faces of the Olympic Games with heroes such Usain Bolt, Wayde van Niekerk and Michael Phelps who inspire the next generation of athletes. Their success and media value attract sponsorships to help with the development of sport. In a world of finite resources, going deeper rather than broader might counter intuitively give more athletes access to the global arena.

Pictures and medal data from Google