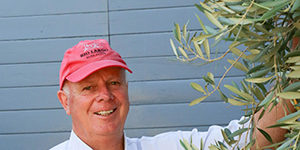 Nick Wilkinson’s career reads like a ‘how to make it big in Africa’ story. The multi-award-winning olive oil maker first spent 20 years working for international corporate agricultural businesses, turning near bankrupt agribusinesses into profitable operations. In one venture he created opportunities for 150 000 small-scale cotton farmers in Zambia, supporting 1,5 million livelihoods. This chartered accountant chose general management, and economies throughout Africa are the better for it

Too much of the good life and a middle age spread first attracted Nick Wilkinson to the virtues of olive oil. ‘As a pilot, I need to pass a full medical each year,’ says Nick.

‘In 1997 my blood pressure wasn’t ideal, and my doctor recommended that I switch to a Mediterranean-style diet. The family was living in Malawi. There are big Greek communities in central Africa and we started socialising with them and holidaying in Greece and Turkey. Their food and laid-back culture interested me.’

Who would have thought that Nick’s recreational (but in-depth) study on olives and olive farming, which started years ago, would translate into a career as an olive oil maker? On the other hand, it’s not so surprising: Nick acts on opportunities. As a young man he decided to qualify as a chartered accountant (CA(SA)).

‘I wondered what on earth I was doing; it was hellish boring, and I wasn’t enjoying it. But I’m glad I stuck with it. Being a CA(SA) gives you a foundation for business. I got exposure to plenty of different businesses, while being paid a salary. The qualification opens doors to many opportunities.’

After a brief spell with the Johannesburg Stock Exchange (JSE), Nick bought an aircraft refurbishment business in 1987. ‘I still love flying,’ he explains. ‘My first business proved very lucrative, but it wasn’t mentally stimulating. I sold the business within two years.’

The next business proposition arrived though a chance encounter on the golf course with a former audit client, who Nick describes as ‘this grumpy old guy’. ‘He owned a pre-stressed concrete lintel manufacturing facility and was looking to offload it – right place right time!

I should have run with it.

‘But the financing contract stipulated being “all in” with no other business interests. My business partner was reluctant to take that route.’

Then, fortuitously, Nick was headhunted and appointed financial controller of a subsidiary of British Petroleum (BP) in Malawi. ‘I had been offered a job in Australia by then Coopers and Lybrand. My wife, Brenda, said, “No ways!”

‘I accepted the Malawi offer as a stepping stone into Africa, and possibly later the greater world, on condition that my prospective employers give me two months to sell my business. I sold it to the first buyer at my price within a month – perhaps the price was too low.

‘BP had sole rights for fuel importation into Malawi. With stringent exchange control regulations, we were always sitting on cash. I met this development bank guy on the golf course who was inundated with requests for short-term loans. One thing led to another and we established a grey market, brokering short-term funding increasing our effective deposit rate and increased the profits for BP.

‘A few months later, my boss was retiring. When I asked for the top job, my proposition was turned down. I was told I needed an engineering background.’

‘Not a problem, as I was approached by Lonrho (they participated in the grey market) and was “parachuted” into a lumbering agri-business, initially in Malawi.

‘My brief was simply to return these “tired” companies to profitability and they included tea and coffee estates and mixed farming operations (dairy, pigs, tobacco and mixed cropping); the whole shooting match. These farming businesses were going nowhere. It was a challenge!’ And one which Nick successfully rose to meet.

‘I learnt very quickly – you cannot control what you cannot measure, if you fail to plan you plan to fail, attention to detail, stick to the plan and continually monitor performance – it works!’

Then, with leg pulling from friends in South Africa, Nick was appointed managing director of two sorghum breweries in Malawi. Within eight months he turned them into profitable concerns and they were sold to SA Breweries.

His next posting was to Lonrho Cotton Africa, a small-scale farming and cotton ginning operations in Mozambique, Uganda and Zambia.

Nick soon developed a reputation as a trouble shooter. The nature of his work meant regular moves for the young family. ‘In Malawi we lived in three houses. In Zambia; let’s see: one … two … three … four houses.’

The cotton businesses were successfully sold, and Nick was recruited by the Common Wealth Development Company to again ‘fix’ the biggest single grain-producing estate in sub-Saharan Africa. It included double cropping maize, soya beans and wheat with a wheat flour mill on an estate of 80 000 hectares, with 15 000 hectares producing grains and sugarcane production on 3 000 hectares.

‘The business was technically insolvent, but with a great team of displaced Zimbabwean farmers we turned it around and sold it off in parts to international investors – got to be the most rewarding challenge of all.’

Meanwhile the Wilkinson’s two daughters registered at Stellenbosch University, and the family returned to South Africa. ‘We wanted to be near our children,’ says Nick, who decided the timing was right for Brenda and himself to buy a farm near the children.

‘The process of investigation took several years. In terms of the National Development Plan, olives were high on the agenda, being a labour-intensive business which is hand harvested.

’In the Western Cape the fruit harvest is from November to April, with labour employed for six months. If there is a bigger olive industry, this extends labour’s employability to nine months.

‘There were a couple of reasons I chose olive farming: olives aren’t edible straight off the tree, require processing and don’t require a cold chain, so there were no worries about refrigeration. Quite simply, you can own the supply chain from field to fork.’

It was harvest time when Nick took over as the new owner on what was a neglected estate in 2010. The oil mill was upgraded with a custom-designed processing plant produced by Italian Georgio Mori, ‘an absolute specialist in production design and one of the best oil tasters in the world’.

Georgio Mori still visits regularly and imparts a lifetime of learning and understanding in the art of producing world class olive oil, fulfilling Nick’s desire to fully understand this life-benefiting tree and its fruit.

In his first season Nick entered the SA Olive Association annual competition with a blend of Italian cultivars, Frantoio, Coratina and Leccino, which depicted the attributes learnt from his Italian mentor.

‘It came as a big surprise to me and I think the industry that the award bestowed on this oil had never been issued before. Winning Double Gold signifies an oil of superior quality!’

This is where Nick, the master strategist and CA(SA), comes into play.

‘I have a direct line to this Italian wizard who can see our work in progress on a screen his side. Mori has addressed the different variables to improve the balance of the nose (or fruitiness), bitterness and pungency. This Italian family knows how to increase the polyphenols content in olive oil.

‘There is no way I could have competed on volume against a Spanish olive farm much bigger than my farm. I decided to forget about chasing retail space and compete on quality; produce olive oil that is above average quality and above-average yield.’

It was a good call.

Rio Largo Olive Oil has consistently won top awards since that first Double Gold, including Gold in Japan for the 2016 harvest and Best in Class in New York.

‘It’s an amazing honour for a South African oil to get this level of recognition from among 800 other oils from around the world,’ says Nick. He credits his wife, Brenda, for her sterling marketing efforts.

Rio Largo is 100% owned by Nick and Brenda. ‘Although we haven’t got B-BBEE status, we have taken the opportunity, through our business,

to uplift people in the community.

‘If you’re generous in life, life will be generous with you.’

“We have mentored Zikhona Tefu of o’Live handmade soap, who produces natural beauty products including soap, as a result of trying to find a product which didn’t irritate her child’s eczema. Brenda introduced her to the investment agency Westgro and supported her marketing at trade exhibitions overseas.

We also assist in marketing Sarah Taylor’s Bee Balmy natural balms as she only uses Rio Largo as her base oil in her products and we support the Save the Rhino campaign with a specific product line.

Nick mentors farm labourers teaching them computer skills to the extent that they are now able to run the processing plant unattended.

In a speech this year as chairperson of SA Olive at the SA Olive awards, Nick said: ‘Slowly but surely international markets are beginning to recognise the quality of South African olive oil. The premium market wants fresh olive oil all year round.

‘The Southern Hemisphere produces less than 3% of world olive oil production. We can deliver when the European olive oils are already six to seven months old – opportunity knocks sometimes very softly, we need to take advantage of this. So, despite the current economic upheaval we’re in a good space right now …’

In terms of success, as Nick says, there is no substitute for hard work.