COVER STORY: The Magic of Music and Math 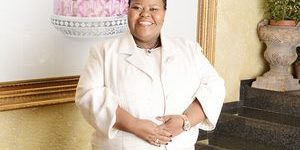 Who says numbers are all cold logic and music all emotion? That’s nonsense, says Lesego Sennelo CA(SA), who appreciates the richness of both

Live from the inside out. That’s Lesego Sennelo’s mantra. It’s by rooting yourself in love, and then choosing to live out love through your words and actions, she says, that moment-by-moment, day-by-day, you can transform your life and grow into the person you were made to be. For her, it’s important to hit the pause button and reflect on what’s really important in life.  This can be difficult to achieve and maintain amidst a myriad of life’s demands, yet remains critical in ensuring career longevity.

It’s fitting, therefore, that she was named 2017 Woman of the Year in Finance as a result of the amazing work she has done to uplift women in her profession. The category is part of the annual Woman of Stature Awards, which aim to inspire and empower women from a variety of backgrounds and endeavours, while also raising awareness and funds for charity.

‘It’s essential that our actions, words and thoughts align with our internal wisdom and core values,’ Sennelo says. ‘It has taken me a long time to learn this, but it’s a wonderful lesson. It means living more intentionally, living a life driven by your internal values – not external or societal values, living from a place of peace and not fear, and responding to circumstances, rather than reacting to them.’

Bold is a good word to describe her. In her multi-coloured animal swirl print outfit, she exudes a sense of confidence and fun. ‘Which other accountant do you know who would wear this to work?’ she asks, laughing.

In the next breath, she breaks out into song with ease, making the lyrics up as she goes along. Music is her saving grace, she explains. She’s chosen a number of tracks for a gospel CD she plans to release later this year. Her preference is for inspirational tunes because ‘the music is in the message’.

Having recovered from a lengthy bout of exhaustion, she’s more energetic and productive than she’s had the ability to be in a long time. She’s even started writing a book about her experiences. It’s one way of harnessing the ten thousand thoughts that run through her head at any given moment. ‘I have a busy mind and I aim to channel these thoughts and ideas for the greater good,’ she says.

Sennelo is grateful her parents were ‘given favour’, as she phrases it. Her father was employed by Munich Reinsurance in the late 1980s, when the firm was still headquartered in what is now Luthuli House. Thanks to a visionary German CEO, the late Dr Ernst-Friedrich Kahle, who decided that the children of all black senior management would go to Model C schools, she was sent to Maryvale College where she discovered her love for numbers. It was, she says ‘sheer luck’.

‘After school, we used to sit in the recreation area at Munich Re, doing our homework. The public library was just down the road and we often went there to do research for our school projects. That was what put me off law. I would see people carrying great big legal books and I knew that was not for me. Give me numbers any day.’

On a more serious note, she says she is thankful she was born with the aptitude for figures. ‘I could also have gone into singing, but I do not want my children to die paupers. I hope to use the combination of a flair for numbers and music to bring about a positive change to the music and arts industry in our country. This is one of the key areas for Black talent in South Africa and Pan Africa, yet the barriers to entry still abound, she adds.

A stint at Unisa, where she completed her undergraduate studies, was followed by an attempt at honours at UJ (then still known as RAU). It was a big leap, and Sennelo failed badly, earning single-digit marks for some of her tests, not because she hadn’t studied, but rather because she was not used to the university’s teaching style.

As the eldest in the family, she had to start working. She joined Deloitte in 2000 to do her articles and was one of ten selected to go through the firm’s national school of accounting programme. On her insistence, she completed her studies in half the allotted time.

It was at Deloitte, a talent grooming environment like all audit firms, that she was allowed to express her creativity as well as her levelheadedness. Sennelo recalls it as a happy time in her life. ‘It was an environment that embraced people holistically. At the end of our first year, we were asked to put on a skit as first-year trainees, a Deloitte tradition to celebrate completion of the first year of one’s training contract. My colleagues were lovely, but they couldn’t sing! However, we did our bit and gave a rendition of “I will survive”. Before we left the stage I decided to sing “uBusuku Obuhle”, “Silent Night” In Zulu. It brought some of the audience to tears. The biggest lesson for me that night was the importance of always being your authentic self. I learnt that you never know what impact being true to yourself may have on others.’

A relationships person who treasures the friendships she has made in her professional life, Sennelo has been president of African Women Chartered Accountants (AWCA), a forum to support and develop African women CAs(SA), since 2013.

She is also the recent outgoing managing director of AWCA Investment Holdings (AIH), where she was instrumental in deal origination to closure for the organisation, as well as managing the operations and reporting to the chairman of the board.

Sennelo serves as a non-executive director for a number of JSE-listed and private companies. She has diverse professional experience in a range of financial and strategic areas in the private and public sectors, including auditing, financial management, corporate governance, strategy development and implementation, project management, investment management, business development, stakeholder management, and people management. A board member of the South African Institute of Chartered Accountants and a member of the Institute of Directors of Southern Africa, she also serves as a member of several other committees.

She is profoundly committed to the growth and development of female leaders in her sector and in South Africa generally. Last year, she was a recipient of the Eisenhower Fellowship, which has a global network of nearly 1 500 active Fellows who are leaders in a broad range of fields. Eisenhower Fellows are awarded a seven-week international travel and study programme to develop their professional growth and deepen their lifelong commitment to EF’s mission of ‘creating a world more peaceful, prosperous, and just’.

‘I did not ask to be president of AWCA,’ she says. ‘In fact, I tried to resign four times in my 12-year journey with the organisation, but I always ended up staying on. The difficulty is that AWCA operates on volunteerism, which is hard to sustain over time as we all have full-time jobs, and no executive to run the organisation. The AWCA board and I hope to change this narrative in the near future.’

Despite these challenges, AWCA has grown the number of black women CAs(SA) from 407 in 2002 to more than 5 000 today. ‘We have helped the pool to grow from 1% of all CAs(SA) to 12% in 15 years, which is a great achievement for a relatively young organisation. This is thanks to a joint effort with other key stakeholders in the profession, including SAICA, the audit firms and big corporates, through the Thuthuka initiative. Critically, we have taken men along with us, as part f our commitment to gender parity.

‘There is much work to be done, and it’s time to do it smarter and more efficiently,’ Sennelo says. ‘We are not there as far as gender parity is concerned. Although the board is a managing board, we do it because we feel we are called to impact the lives of others. Our role is to identify, nurture, train and develop ethical women leaders in our field, people of influence who can drive the country and the continent in the right direction – not only strategically, but also from social and ethical perspectives. When the moral code in a country is lacking, it is too easy for integrity to fall by the wayside. Our profession, however, is founded on unshakeable principles. One plus one equals two, and no margin of error is allowed.’

‘Educated women hold huge value for this country,’ she adds. ‘I tell those who consider leaving South Africa that it’s a copout. If you depart, who will help those who stay behind? According to the UN, if we equipped women in the world who are not in the mainstream to be economically viable, we could create another China. That’s what I want to be involved with now. It’s a mammoth task to move this country and continent forward, and it will take enormous collaborative effort.’

Looking to the future, Sennelo is working on setting up a vehicle for enterprise development and will be investing time and capital in helping people establish, expand and improve businesses.

’I am committed to helping people to earn a living, moving them out of poverty, and equipping people with the skills needed for long-term economic growth for themselves, their families and their communities. The only way to do that in a country which has been given junk status is to create sustainable businesses which grow and lead to job creation, which in turn contributes to economic growth.

‘We need to provide young people with opportunities, we need to find ways to transfer skills and wealth, and to pave the way for sustainable growth. We need to create opportunities for local entrepreneurs to ensure that the country will be able to face the increasing pressures of a global economy. The way to do that is to develop sustainable models to fuel and support entrepreneurship.’

A recent session in EY’s Cube environment, where companies stress-test their Africa growth strategies, gave Sennelo even more confidence that Africa is open for business. ‘In East Africa, for example, there are 230 million people. What many of us do not understand is that financial services in any form can be maximised based on numbers. Banks thrive on those numbers. What’s next for me is purely about poverty eradication. My vision is to come up with a financial instrument that enables the poorest of the poor to generate wealth.’

No-one she’s come across in her profession has not been prepared to work hard. ‘Don’t think that it all comes to an end when you qualify,’ she says. ‘On the contrary, that is when the real work starts. The opportunities in this profession are endless, but we are dealing today with challenges that did not exist 20 years ago. The toughness of the board exam is a measure of how tough the global economy has become, and the world of business along with it.

‘It’s important to always do your best, and to be kind to yourself. If all you can do today is get out of bed and show up, then do that, and you will have done your best for this day.’