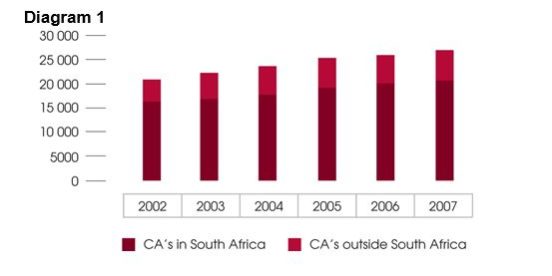 The financial and auditing skills exodus

Plugging the ‘brain drain’ in the Financial and Auditing sector will be no mean feat as the SAICA commissioned research reveals. Pressure comes from different sources that impact negatively on the number of skilled professionals and workers in the sector; unacceptably low output of capable learners from school level, poor throughput rates at higher education level, poaching from international organisations, etc.

Judging by the success that SAICA has achieved over the years in its intervention strategies, the problems are not insurmountable. The current financial global meltdown is also likely to increase pressure on the sector to put in place strategies and avoid a repeat in future. The envisaged outcome of the meltdown will increase the demand for experienced accounting and auditing professionals.

According to the SAICA commissioned research findings, South Africa needed 22 000 accountants to fill vacant posts in 2008 and that number will increase when one considers the ‘replacement demand’ and new positions for 2009. The country is struggling to produce enough professionals as an average of 1,4% CAs(SA) leave the country every year and it looks less likely that this percentage will drop in the near future.

While the research does not mention the returnees, there is less of a likelihood that returnees would outnumber those opting to emigrate. It is very unfortunate that the highest number of skills exodus is at the level where it is almost impossible to get replacements due to the number of years required to produce qualified professional accountants and CAs(SA). This creates a vicious circle whereby professionals are paid well but feel they cannot cope with the work demand and stress levels associated with the increased monitoring and supervision of work performed by lesser qualified support staff, resulting in more skills exodus.

The research findings estimate that 1,5% of financial staff are leaving the profession for a variety of reasons. Some get promoted to managerial positions, others start their own business ventures, etc. The projection model developed to predict future trends reveals that emigration at honours level will be 1,5% per year while at degree level it will be 0,5%. This situation is not sustainable as SAICA’s goal of increasing the number of CAs(SA) is being thwarted by the emigration statistics. The number of CAs(SA) has been growing at more or less the same rate (5,3%) annually as those that opt to emigrate (4,9%).

What has SAICA done about the skills shortages?

As a starting point, SAICA commissioned the skills shortages research in order to identify and quantify areas that need urgent and critical intervention. Now that the research findings are available, SAICA is calling for a national debate to discuss the issues raised in the research report and to collectively develop strategies to tackle the problem head-on at different stages. This is besides SAICA’s pre-2007 ongoing interventions at schools and higher education institutions. The first step in the process is to ensure that the Financial and Auditing Sector skills shortages are acknowledged and registered with the government’s JIPSA programme. The next step would be to draw on all stakeholders to keep the national debate going on the development of effective intervention strategy.

What are some of the interventions/strategies required?

The solutions required are both long~ and short-term. The long-term solution is directly linked to the quality of our education system. The biggest challenge facing the Financial Sector is a lack of suitably qualified matriculants with higher grade Mathematics. In 2006, only 25 000 learners passed Mathematics at higher grade (6,8% of all mathematics candidates).

The short-term intervention at this level would be to provide more Mathematics tuition and opportunities to learn more about the ever-changing world of work. The Mathematics situation will probably get worse before it gets better as the Outcomes Based Education (OBE) curriculum has introduced Mathematical Literacy (ML) as an alternative to Mathematics.

Due to the historically poor level of Mathematics education in South Africa, it is not improbable that the majority of learners would take the easy option and present ML as a subject in their final examination. This would pose a serious challenge for any of the learners interested in pursuing higher education studies as all South African tertiary institutions have agreed not to accept ML for entry to professional degrees like BCom, Medicine, and Engineering etc.

SAICA’s strategy has always been to intervene at all National Qualifications Framework (NQF) levels. SAICA’s strategy has always been to grow the pipeline in line with the organisation’s transformation strategy. Starting at the school level, SAICA provides programmes to increase interest in the sector and offer extra tuition in Mathematics both in terms of teacher development and learners. At NQF level 3, 4 & 5, SAICA has introduced the Association of Accounting Technicians Certificate (SA) as a long-term solution to the skills crisis at that level. Such a move will benefit the local and provincial governments. The re-skilling at this level would have an added benefit of alleviating the pressure at professional level as less supervision would be required from the professionals at NQF level 7.

The NQF level 6 interventions involve SAICA’s Thuthuka Bursary Fund. The Thuthuka programme which involves an holistic approach to tertiary study has enjoyed unprecedented success in terms of throughput rates thus growing the pipeline for increasing the numbers of professional accountants and CAs(SA).

SAICA’s intervention model has shown that it is possible to increase the number of graduates in order to plug the brain drain. What needs to happen now is that the model should be adopted nationally in dialogue with SAICA.