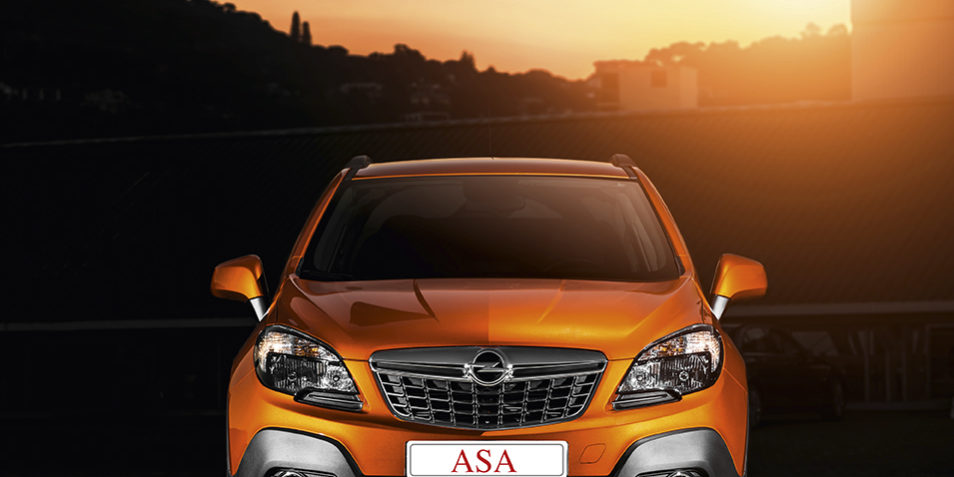 The new Mokka is Opel’s attempt to break into the very popular SUV market. Unlike the Zafira, the MPV from Opel, the Mokka is more compact and has a raised ride height, which adds to the appeal for most buyers who prefer to see over the car in front of them.

To start, the Mokka’s front end looks like the Corsa’s bigger brother. The large grill proudly displays the Opel badge on the top section with a rather thick chrome surround. The headlights stretch rearwards giving it more prominence. The front bumper is incorporated seamlessly into the front end. The bottom section of the bumper is black and the section around the fog lights mimic large brake air intakes. This, together with the matt silver scratch plate in the middle of the bumper, finishes off the front end. The bonnet has a stepped finish to it, with the sections behind the headlights being lower that the centre section, making the vehicle look bigger than it actually is. The large windscreen is a pleasure to see through but can get very hot on sunny days. The side view continues the hatchback-on-steroids look with the elegant waistline and lower door creases. In keeping with the SUV rough-tough theme, the black bottom is carried all the way through to the rear bumper. The top of the range looks sportier thanks to the larger mag wheels. The rear windows have been tapered towards the rear giving the impression of a coupé rather than the standard SUV/hatch look. The window silhouette reminds one of the sports coupé but without the striking sporty front ground-hugging stance. At the back is where I think the designers got a bit tired, as the rather stubby rear end and dull rear-light clusters are not in keeping with the rest of the vehicle. The rear bumper matt silver scratch panel does help but not enough to say that the car has a refined rear end.

Inside, the Mokka is very well equipped and feels solid from the time you open the door. The larger three-spoke steering wheel with its large centre spoke is standard Opel. The dashboard is neat and has an airy feel to it, thanks again to the large windscreen. The centre console looks rather busy with tons of buttons and a fair number of knobs to control the infotainment system and climate within the vehicle. The top centre of the dashboard houses the infotainment screen. This, together with the multifunction steering wheel, works well as you don’t have to look down to check the time or what’s on your playlist. The gearshift is chunky and has a solid feel to it, which will definitely appeal to drivers who enjoy working the gears.

The seats are comfy and materials used are of high quality. Thanks to the high roofline, rear leg and head room is good. And you can fit five adults comfortably in the vehicle. The luggage compartment is in keeping with Opel’s tradition – large and usable. The boot opens right down to the floor, which makes loading a synch. The flat floor and foldable 60:40 rear seats make for some serious cargo space.

The most important factor for me though is the drive itself. The Mokka comes with a 1,4-litre turbo-charged motor producing a healthy 103 kW and 200 Nm of torque, which makes for a rather playful drive. The clutch is soft and gear changes are smooth and precise. The power steering is light but felt a bit dull for my liking. The all-round visibility is good, but the rear C-pillar does come in the way when reversing. Road holding is not bad considering the ride height, but it’s definitely not on the same level as the Astra OPC.

Overall, I think this new addition to the Opel stable is a good vehicle that will add to its sales, but it is up against some stiff competition who have already made their mark in this popular segment, and that may prove to be a challenge.

Ford has always had a rich history in South Africa as being synonymous with fun, family and powerful engines. The all-new Focus is keeping with the above, except in the power stable, as this is no 5,0 litre but a 1,0 litre. No, I have not left out a number – the car has a 1,0-litre engine.

This new range of motors features the now famous eco-boost engine, which effectively makes the normally puny engine into a power house for its size. It’s like a little dynamite package under the bonnet. If you’re still not convinced, let me add some stats into the mix. To start with, the 998 cm3 engine has only three cylinders but produces as much as 92 kW at 6 000 rpm and 170 Nm of torque. In plain English, this means that this vehicle produces as much as what a 2,0 naturally aspirated motor from the 1990s produced. This addresses any scepticism around the size of the engine. To add to the amazement, this vehicle is claiming to manage a combined fuel consumption of 5 litres per 100 km.

The new-look Focus Hatch looks a lot more refined and sophisticated. The new-shaped bonnet has two pronounced lines that form a small V and widen as it stretches back to the windscreen. The grill on the Focus has a similar shape to that of the Aston Martin. The headlights fit well and are in keeping with the new grown-up look. The rear end is well finished with the rear tail-light cluster that has been pulled forwards. This new shape looks good but lacks the sporty stance of the ST that was tested last year.

Pull on the door handles and the door opens effortlessly to reveal the rather airy interior. The grey contrast seats and dashboard look good and well balanced. The driver’s position is good and the multifunction steering wheel feels comfortable and is adjustable for all driver sizes. The dash layout is different in that the speedometer and tachometer are on the outside of the dashboard, while the space between the two dials houses the fuel and temperature gauges. Just above this is the LCD screen that displays all the computer data on the car, like fuel consumption and range. The centre drop-down console is rather wide, but as it is set back it does not intrude much in the space between the driver and passenger. The infotainment system looks great and works well, although there are a number of buttons which makes it look a bit busy. Lower down is the climate control and the USB port. The manual gearbox is light and precise during gear changes. The door handles wrap the driver and passenger, making you feel like you are in a cocoon.

On the road the car feels light and simple to drive. The steering wheel is responsive and user friendly, making the school runs a synch. The windows are fairly large, making all round visibility good. Road hold is good.

But even though the car is amazing for its size, don’t expect it to burn rubber or challenge a pocket rocket. That being said, it has ample power for the daily run about and the occasional long haul. Overall, I think Ford has a winner with the new Focus as it looks Good and is easy to drive, light on fuel and has sufficient space for adults and their luggage. A worthy replacement of the previous Focus.

AUTHOR | Torque Talk is a me