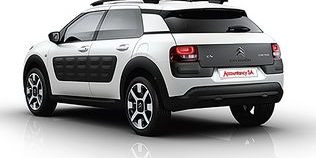 I guess the name Cactus says it all; this no ordinary car. Citroën designers have gone all out to make a vehicle that looks different from anything you have ever seen.

To start with, they have taken the C4 platform and threw out everything above the wheels. The new hatchback-style body has got a sporty look to it while the slimline LED daytime lights give the vehicle a kind of futuristic look. The oversized front bumper is exaggerated to the point that the headlights are fitted into the bumper while the bonnet is set back, making the vehicle look more like a space buggy.

In keeping with the buggy theme, the vehicle’s doors and bumpers have a sort of bubble-wrap trimming. This is not just aesthetical but rather designed to be functional too. These trimmings are the much spoken about air bump technology. Effectively if something bumps into these trimmings, they will be pushed in and then pop right back out. This is meant to save you from car doors opening onto your car, runaway shopping trolleys, etc. However, the air bumps will not be able to pop right back after a high-speed collision.

The lower part of the vehicle is also covered in a rather tough plastic that is the same colour as the air bumps. This gives the vehicle a raised look, again in keeping with the buggy appearance. The windows are large and the rear window is frameless. This looks good, but it does mean that the rear windows cannot be rolled down; instead they can just be popped out like an MPV’s rear windows.

A large C-pillar and high-gloss roof rails complete the look. The mag wheels were not well designed, in my view, as they seemed too plain for this rather interesting design. The mag wheels look like four squares joined together; almost like they were an after-thought. The rear end was a bit disappointing too, with its raised rear bumper and small lights. This made it look more like a bakkie than a buggy.

Open the doors and you are welcomed to a rather futuristic dashboard. It almost feels too minimalistic. Behind the rather large steering wheel is a rectangular LCD display that gives the driver the basic information required. There are no fancy dials or buttons, just the LCD screen. Between the buttons on the steering wheel and the stalks on the side, you can change what is on the display, but it is still very basic.

The centre console is very plain, with no buttons apart from the hazards and de-mister controls and one knob for the radio volume. However, all that you need to control is done through the colour LED screen. The Shine version I had on test comes standard with navigation that works well once you understand how to use it. The passenger section of the dashboard is also very interesting in that it looks more like a classical trunk top with leather straps. In keeping with the cactus look and feel, the top of the trunk has plastic bumps that assist in holding items that are placed above it but do not secure them in place. The seats also have the same design as the air bumps running across the centre of the seats.

The space inside the vehicle is good, with decent legroom all round. The load bay is also decent for the size of vehicle, but it’s not up there with the best due to its rather narrow and awkward opening. The rear will also be prone to scratches, as the boot opening is fairly high up so you will have to lift the goods up to get them in. Another drawback is the rear seats, which have a single backrest. This means that when you drop the seats to load you cannot keep one section up, as the full seat is either folded or upright.

On the road, the vehicle felt solid and easy to drive. The visibility is good, but the C-pillar does obstruct vision when parking; luckily there is a reverse camera. The 1,2-litre Puretech motor produces sufficient power for city driving and the odd long haul. The gearbox feels solid and is easy to use.

In summary, the all-new C4 definitely has something going for it if you can live with a few drawbacks. The main thing about the vehicle is that it is more of a fashion statement than an all-out fun buggy. You will be noticed in this vehicle, especially if you choose a colour combination that suits your personality: from screaming yellow to subdued white, there is one to appeal to everyone’s quirky side.

The term SV is normally used by VW’s sister company, Lamborghini, where it stands for ‘super velocity’. In VW’s case it stands for something totally different. The SV means ‘sports van’, as VW could not slot this vehicle into any of the categories of current vehicle models.

At first glance, the SV does stand out from any Golf as it looks more like a Touran than a Golf. The Golf is better known for its cult following and sporty appeal. The SV, on the other hand, seems to be more of a practical family vehicle. The first thing that stands out about this new vehicle is its height; it towers above a normal Golf and its rather large windows give it a unique look. It’s almost as though VW took a Golf and stretched the top of the vehicle to make the new SV, as everything below the waistline seems to have remained pure Golf.

Interestingly, from the front it’s not as easy to make out that the SV is more van than hatchback as the windscreen is rather sharply raked and has identical Golf headlights. It almost looks like a cross Golf thanks to the roof rails. The front bumper has been re-designed to incorporate fog lights that are mounted mid-way up the bumper. This has been done to create the illusion that the vehicle is lower than it actually is. The view from the side and rear gives a totally different impression. The high roofline and extended rear section together with the large tailgate echo origins from a van. It’s a look that will grow on you as you see it more. Most bystanders could not believe that this was a Golf, especially the hardcore Golf enthusiasts.

The interior will make any VW driver feel right at home. The dashboard layout with its two large dials and a smaller dial in each that is easily seen through the sporty leather bound steering wheel. The gear shift has the typical solid feel of a VW and the heavy clutch is a thing of the past.

The big difference though from the original Golf is the amount of space there is within this vehicle. The headroom is by far the best, as there is just such an airy feel to the interior. The rear legroom is also amazing for the size of the vehicle and what’s even better is that the rear seats can be moved forward or back depending on the luggage space required. At its most forward position the leg room is slightly smaller than a Golf; however, at its most rear position it will rival most long-wheel-base vehicles.

The Comfortline came with an added feature of foldaway tables mounted to the back of the front seats. This is a great feature when travelling on the long road. The luggage compartment is comfortable for most families and, if required, can become more like a cargo van than a family vehicle.

I think the most important feature for most Golf drivers, though, is the drive and road-holding. Being a higher vehicle, the SV has surprisingly good road-holding. I would compare it to a Golf R, but it surely has the same underpinnings of the cult Golf. The vehicle will in most instances stick to the road and handle like a Golf, but thanks to the higher centre of gravity it does battle on the twisty roads at high speeds. The good thing though is that it does not feel like a van to drive – with its light steering wheel and excellent all-round visibility, the vehicle is easy to drive.

Overall, I believe that VW has created the next generation Golf, namely the family Golf, especially for those drivers who are die-hard Golf fans. It’s fun to drive and light on fuel and, most importantly, has lots more space than any other hatchback. The vehicle has already been a success in Europe and I think it won’t be long before it catches on in South Africa. Let’s see how this new VW carves out a new niche in the market for itself.