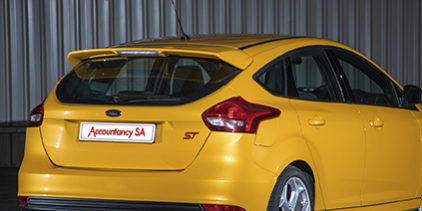 The blue oval badge of Ford has always been synonymous with racing, but this seems to have disappeared – especially in South Africa. All this has changed as over the last few years Ford has been releasing a few powerhouse vehicles specifically within the hotly contested hot hatch market. And this is not the end: Ford is also planning on launching a lot more models into South Africa. The one that we have all been awaiting is the right-hand-drive Ford Mustang, which was launched at the end of 2015.

That being said, how does the latest incarnation of the popular Focus ST stack up to the oval badge? Well, the new vehicle looks have been refined; it now has smoother lines and almost no gaps between panels. This makes it look more sophisticated, almost aristocratic. The new front has been given a larger version of the now common Ford grill, which is reminiscent of an Aston Martin grill. The lower section of the bumper is split into three with sharply angled contours. The headlights look smaller but are sleekly fitted on the flanks of the bonnet. The side view is almost indistinguishable from the previous model, but the rims look bigger. The middle section of the taillights has been elongated to the point that they stretch over the side giving a unique, yet sporty look. The vehicle also has unique exhaust pipes. They look like two angular ovals that are joined into a single one. I have to admit this was something that I quite liked. The rear end is completed with a slotted rear spoiler. The best part of the ST model is the funky colours available. I was given a red one which looked very similar to a Ferrari red.

Inside, the dashboard layout is the same as any other Focus, but that’s where the similarities end. The leather-covered steering wheel is well positioned and has excellent feedback. The gearshift is also leather bound and has a solid feel to it when changing gears. The two-tone Recaro sport seats look like they come directly out of a racing vehicle, but what’s more impressive is the comfort they offer. The ST also has as standard three dials that sit above the centre of the dashboard in their own compartment. These dials are the oil pressure, temperature and, most importantly, the turbo boost gauge. They may look good but they are also very useful, especially when you drive the vehicle hard.

On the road, the vehicle is easy to drive. However, this car was meant to be driven to its limits. At its limit the vehicle pumps adrenaline through your body at the same rate as the boost gauge indicates. It also requires a lot more concentration and sometimes skill to manage the beast in the bonnet and the one on your foot when the car is pushed. This car is definitely a lot of fun to drive if you know how to drive it. The one thing I do warn you though is to keep your eye on the speedometer as 120 km comes up pretty fast and you may think you are only doing 60 km. This is something that the traffic cops will not take too lightly. The vehicle can also get quite thirsty if you don’t lighten your foot. In normal driving conditions it was actually very economical.

Overall I think Ford has done a brilliant job in putting together the latest ST.  It’s the type of vehicle its competitors need to fear, as the blue oval is back.

The new Polo GTi has come of age, with a more refined look, without losing the hot hatch appeal that most people love about the Polo.

To start, the front has been overhauled in line with the overall new VW face. Like its bigger sibling, the Golf GTi, the Polo GTi has a red line running the bottom of the grill, but on the Polo it continues only half-way through the headlights. This makes it immediately distinguishable from other Polos. The revised front bumper looks more aggressive thanks to the additional angular lines. The large honeycomb mesh in the grill and lower section of the bumper is in line with the sporty look. From the side, the biggest change is the new 17-inch Parabolica rims. These are in keeping with the move away from the five-hole rims to thin spokes which are two colour, adding depth to the side view. The rear end is only differentiated from other Polos by its twin exhaust pipes.

This is not the case with the interior. The GTI has a chunky leather steering wheel that is complemented with a leather gearshift.

The seats are also leather covered with horizontal slats, and the front seats have additional lumbar support in keeping with the sporty theme. The updated touchscreen infotainment system looks good and is possibly one of the easiest to use. The overall mood inside is sombre.

The biggest change in the GTI is the long-awaited re-launch of a 1,8-litre turbocharged motor. This has pushed up the power to a crazy 141 kW and 320 Nm of torque. Added to this, there is the now well-known TSI motor, which means that most of the power is available almost all the time. This makes the Polo GTi a real pocket rocket, and even though it does not have the same amount of power as the Golf GTi, I believe that this will become one of the Golf GTi’s biggest competitors.

The test vehicle had a six-speed manual gearbox. This combination worked well for the vehicle, as you always felt in total control.

At higher revs the engine hum assisted the adrenaline that rushed through you, which instinctively made your right foot heavier.

This car was built to be pushed to its limits. The engine and gearbox never missed a beat and with its stiff suspension, it is a perfect track day car as well.

Road-holding was good for a front-wheel-drive car, but if you don’t know the car well enough, you will land up with a lot of understeer as the turbo kicks in midway through a corner.

Overall the Polo GTi has grown up but it has not lost its schoolboy racer appeal. This new Polo GTi is possibly the closest you will get to a modern-day Golf 1 GTi all the way down to the teeth-wrenching stiff suspension.

It’s perfect for those who like to drive a car mainly short distance, as on the long road the suspension can become a bit annoying.

All in all, VW does a have a winner as a pocket rocket.

Author:  Torque Talk is a member of SAGMJ