LEAD: Profile: A HEART FOR TEACHING AND BETTERING GOVERNANCE 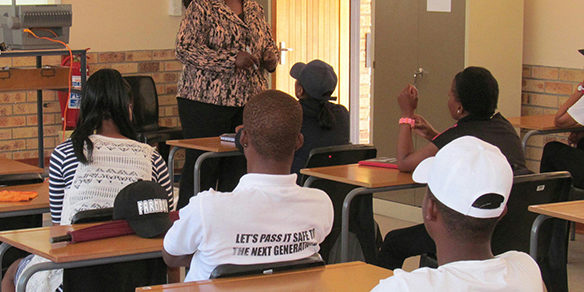 While Sasolburg’s Caroline Mapulanga’s official job description is Accounting Technicians of South Africa facilitator, unofficially, she is a cheerleader and a pillar of strength for the learners she’s encountered in her six years as an AAT(SA) trainer

When you train learners from impoverished backgrounds all across the country, you learn valuable life lessons. You deal with real issues; people’s hopes and fears, their struggles, and their victories. As Accounting Technicians of South Africa (AAT(SA)) trainer, Caroline Mapulanga considers herself blessed. ‘My work has given me the rare privilege of travelling across the country, being exposed to ubuntu, and interacting with brilliant young people who I believe are South Africa’s future accountants,’ she says.

Caroline’s journey with AAT(SA) began in 2010 when she was hired by S&T School of Accounting to train 60 learners on the Local Government Accounting Certificate in the Western Cape – an AAT(SA) certificate specifically aimed at those employed in a financial role in local government.

It was a baptism by fire, as she was simultaneously training 12 learners on the same AAT(SA) learnership at Ekurhuleni Metro.

‘My Western Cape class was a mixed crowd with very different abilities,’ says Caroline. ‘Some really struggled. My biggest challenge was convincing them that they could make it because they doubted themselves.’

The course itself takes a big commitment on the learners’ part. Many of them are moms and dads with their own worries aside from attending the weekly classes and passing the course. ‘We would meet at different municipalities to make it fair for everyone. One month classes would be held in Ceres and the following month they would be held in Tulbagh or another town,’ says Caroline.

As a body, AAT(SA) is the premier professional body in South Africa dedicated to the education, development, regulation and support of accounting technicians, which it does by raising the competence and professionalism of members through continuing professional development. So it comes as no surprise that its Local Government course is intense and covers a lot of ground in each month’s four-day session. But, says Caroline, the learners worked hard and their hard work paid off. Her first batch in the Western Cape and Gauteng completed five units of study material: covering standard procedures like recording income and issuing receipts, to more involved processes such as sourcing and matching documents as well as resolving discrepancies. Processes that, if well run, make a municipality’s billing system effective and keep ratepayers happy.

Also surprising was how many of Caroline’s students found Professional Ethics particularly interesting. ‘They were intrigued at whistle-blowing. They felt empowered in knowing that it was acceptable to report corruption.’ Others took on the challenge of operating a computer for the first time. ‘Some worked in rural municipalities where there was only one computer for the whole office,’ Caroline continues.

In 2013, Caroline was contracted by Sesto, a recruitment agency, to train 60 learners from North West municipalities on AAT(SA)’s Local Government Advanced Accounting Certificate (LGAAC). The training was sponsored by the Premier’s Office in North West. Since then, Caroline has trained learners at Flavius Mareka TVET College for a BANKSETA project and on several other projects.

Caroline says that In her six years as a trainer she has been surprised by the extent at which AAT(SA) learners care about each other’s wellbeing: ‘There is a spirit of ubuntu among them. In some cases, the course sponsors only paid for breakfast and dinner, but lunch is not provided. In North West, my class of learners pooled their money so there was enough for everyone to have lunch. This gesture really touched me as everyone has so little money at the smaller municipalities but they are still happy to share the little that they have,’ she says.

‘There was also a language issue with several learners and they managed by helping each other. Some learners were Sotho-speakers who were not fluent in English. Their classmates would translate the lessons to help them. I think this contributed to the high pass rates.’

To date, all the learners Caroline has come into contact with have come from disadvantaged backgrounds. Some of their stories and their strength of character leave a lasting impression on Caroline. For example, she talks about a young woman, Motshedisi Julia Tlhapi, who recently completed the AAT(SA) course at Level 4 and is ‘work ready’. Motshedisi is an orphan and is raising her three sisters and a child of her own. The young family lives in an informal settlement in Vereeniging.

‘Motshedisi was brilliant because she never gave up on herself,’ says Caroline. She has needed to be very strong in the face of adversity, when at times she felt utterly hopeless. ‘None of us are working,’ says Motshedisi. It is not for want of trying. She is seeking any employment within the finance and accounting professions.

‘During my course, we had no food at home. I told my sisters that I was putting my career first and we would just have to get through each day,’ says Motshedisi. But with this burden on her shoulders, Motshedisi was unable to concentrate on her studies. ‘I failed one subject four times,’ she says.

‘I was the only one still in class. Then I decided “what is the use” and I stopped attending classes. But Caroline encouraged me when I wanted to quit. She called me and told me I could do this. I passed the last unit of my Level 4 course in June this year,’ Motshedisi says proudly.

Another success story is Mpho Mofokeng from Johannesburg. ‘He was the oldest in the class as there is a cut-off age for bursaries,’ states Caroline. ‘He had done many courses and was frustrated as he felt he had nothing to show for it.’ Caroline took him under her wing and prayed with him before each class. Today, he earns a good salary as an employee at Massmart.

‘My work is exciting,’ says Caroline. Financial status and age are not limitations to her students. Caroline once taught a 60 year old who worked in the Accountancy Department at Wits University and ‘who was the sharpest in the class’.

SEEING LIFE IN A DIFFERENT LIGHT

Meeting young people like Motshedisi and Mpho has grown Caroline on a personal level. ‘I am more grateful and more compassionate,’ Caroline reflects. ‘Little things that used to bother me don’t anymore. I see life from a different perspective. Sometimes prayer is the only thing that keeps me going because the feedback from learners on their circumstances can sometimes be draining because I can’t do anything to help.’

To Caroline, the only drawback of constant travelling is being away from her husband and children. Fortunately technology enables longer chats through WhatsApp. She recently relocated from Johannesburg to Sasolburg and is enjoying less of a commute and precious extra time at home in the mornings. Her next goal is doing a PhD in Accounting. ‘Luckily my children are completing their studies, soon so that will be my long walk to freedom,’ she says with a chuckle.