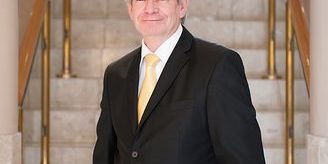 After 28 phenomenal years at SAICA, Graham Terry, Senior Executive for Strategy and Thought Leadership, has retired. Having held a host of roles, he has been significant to the success of the profession, right from developing the Standards Department to being an ambassador for sustainability issues

An outstanding individual, Graham is described by colleagues as an extremely intelligent individual, a perfect gentleman, and a fantastic listener. Despite his kind and gentle demeanour, he has been firm and dynamic in his leadership and one who has exerted great influence both nationally and internationally.

Initially starting to study towards being a lawyer, he soon realised that becoming a CA(SA) was closer to what he really wanted to do. Training at Ernest & Young in Cape Town, Terry left as an audit manager in 1985 and moved to Johannesburg to join SAICA on a three-year contract as technical director.

When Terry first joined SAICA there were approximately 30 employees, the CEO then being Ken Mockler, who started the institute in 1980. Through the years Graham has observed SAICA’s budget growing from a mere R3,5 million in 1986 to its current one of approximately R460 million.

Although the Standards Department did exist before Graham joined as technical director, it was run by contractors who were brought over from the UK. Shortly before he joined SAICA they left, which made him the sole person in the department with the immense task of starting it up from scratch. Today, as we know, it’s a huge department and the lifeblood of SAICA.

Although Graham admits he’s not a titles person, he has held many prestigious positions at SAICA. After being technical director, he was appointed chief operations officer, then deputy chief executive of SAICA in 1995. He held the position for four years before being appointed Vice President and Executive Director of Strategy in 2000, where his true passion lay. He has also been a guest speaker at numerous conferences, had numerous articles published on accounting, auditing and sustainability, and chaired many boards.

Being the thought leader he is Graham has the ability to look at the broad environment, synthesise it and understand what the real issues are and what the drivers of the future will be. This led him to initiate many instrumental thought leadership projects at SAICA.

Graham always had an avid interest in corporate reporting. In 2001, with the failure of Enron, he set about to research corporate failures. And in 2008, with the onset of the financial crisis, he realised it was apparent that corporate reporting was not achieving its objectives. In 2009 the King III report came out and recommended companies to start producing integrated reports. Shortly afterwards the JSE made this mandatory on an apply or explain basis for listed companies, but the question remained: what was an integrated report? There was absolutely no guidance either in South Africa or internationally other than that what was stated in King III. A working group known as the Integrated Committee of South Africa was put together and Professor Mervin King was appointed chairman. Graham was appointed chairman of the working group.

Internationally there was also great concern about corporate reporting. Being a great proponent of environmental conservation, the Prince of Wales annually gathered businessmen and representatives of the accounting profession to attend meetings. His aim was to push the accounting profession to do something more about corporate reporting. In 2010, Graham attended some of these meetings and when the International Integrated Council was formed, he was invited to join the working group.

In the meantime, the South African working group was fervently putting together guidance on integrated reporting. In January 2011 Graham along with various other organisations were invited to present the South African version in London, where the best possible framework would be decided. The South African one was judged the most relevant at the time and this was a beginning point for a long journey to the international framework, which was published in December 2013.

For Graham it was an extremely exciting project as it involved working with people from all around the world, as well as people from different disciplines. Its success gave him immense satisfaction as it was finally improving reporting and bringing attention to environmental and social issues that lie close to his heart.

Graham has always nurtured a keen interest in environmental and social issues. Having read extensively through his life, he was well aware of the threats of global warming and its cause. What struck him most when he started doing research was the fact that businesses generally didn’t seem to understand or have a clue as to what these issues were all about and their severity.

Whilst researching for SAICA, he realised he could indeed play a significant role in raising awareness among members and businesses and hopefully encourage them to start taking responsibility to help people to really understand what sustainability issues are all about and how they affect business. This led him to write the book Green, published in 2009, an encyclopaedia of environmental and social issues relevant to business. Later, Green II was published, in which Graham brought together contributors and experts from various fields and backgrounds that have all joined in the call for corporate leaders to embrace sustainability.

Over time it became apparent that there was a greater awareness and that business and other organisations were beginning to understand the constraints that our earth was imposing on us. Today, more and more organisations are doing sustainability reporting and integrated reporting is beginning to take off. However, Graham says it is all looking more and more to him like smoke and mirrors.

“Is there really a desire to address the challenges facing us? I think the thing that has changed my perception is the investment that is going into exploiting fossil fuels globally. With the new technology, oil reserves have multiplied and we as a world are very much on a course to maximise profits out of fossil fuels. Unfortunately, use of fossil fuels leads to GHG emissions, which lead to warmer temperatures. In terms of international agreements there has been an attempt to restrict global warming to 2 degrees Centigrade. With the refocusing of fossil fuels, I cannot see that target being met. Indeed, scientists are saying temperatures could increase by much more than 2 degrees by the end of the century. We are not sure humankind would survive in increases of that magnitude.”

Ultimately Graham believes the CA(SA) profession still needs to understand its role and play it effectively. “Accountants provide information for decision-making in society,” he explains. “Simplistically, we measure, report and provide assurance, but are we providing the right information to society at the moment? Our competence vests in financial information, but financial information is not adequate on its own to inform decision-making. There is so much more to be considered. Attempts are being made to address this through sustainability reporting and integrated reporting, but we urgently need to provide sharper tools. In addition, some organisations use these tools to mask their true intent by promoting the positives and suppressing the negatives. Society looks to us to provide information. If we fail, someone else will try to assume the mantle.”

In 2014 Graham was appointed an IIRC ambassador and will continue raising the importance of social and environmental challenges facing our society and the role that our profession needs to play.

Now that he has retired, Graham and his wife will be moving back to Cape Town to an apartment and live a modest lifestyle. He will continue his research and development with a special focus on integrated reporting and integrated thinking. Currently he is still involved in two SAICA projects: one on integrated thinking and the other on the history of the CA(SA) profession in South Africa.

Highly respected and well liked, Graham will be greatly missed by all his colleagues at SAICA.

Author: Lynn Grala is the Publications Assistant at Accountancy SA