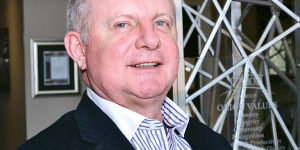 It would seem like Franz Gmeiner was destined to be an entrepreneur. It seems like even he was baffled at the extent to which he took his entrepreneurship aspirations. The journey to the Orion Group dream was punctuated by deviations. But the eventual success of the group’s 13 hotels and lodges is testimony to Gmeiner’s resilience and unique brand of entrepreneurship.

“I only ever had one ambition in life – to be an entrepreneur. Anything to do with business excites me. The big thrill is the chase and the close of a deal.”

Where did it all start? Strangely enough, all of this has its roots in Austria.

“Arriving in South Africa with my parents in 1963 as a seven-year-old immigrant child was the beginning of learning how to cope in unfamiliar and sometimes hostile environments. This naturally awakened my competitive nature,” says Gmeiner.

“Learning a foreign language and to be taught not in my mother tongue made me aware that one can always be successful regardless of circumstances.

“I was fortunate to have great teachers and lecturers who taught, counselled and encouraged me to succeed. I therefore succeeded beyond even my own expectations at school and university. My success was recognised by attaining academic honours colours both at school and university as well being placed in the top ten when I wrote the chartered accountancy board examination in 1983. I qualified as a CA(SA) at the age of 25 and owned my first office tower when I was just 33 years old.”

Gmeiner attended an Afrikaans-medium school in Germiston. His first challenge was a religious and linguistic one: he was foreign in this blue-collar community in terms of not being able to speak Afrikaans and being a Catholic in a predominantly Dutch Reformed Church community. He had to learn fast!

Unlike most successful entrepreneurs, it seems like Gmeiner’s experience taught him to be close to his family and his extended family – his staff members. He has certainly put his money where his mouth is, proverbially speaking, of course. He gave every single Orion staff member shares in Orion Real Estate Limited: a total of five million shares were distributed in this manner.

Gmeiner has also got his family members involved in the running of the Orion Group.

“I am married to Dr Antoinette Gmeiner. She works with me in the organisation fulfilling various roles as HR director, CEO training division and partner in the Spa and wellness division (Bakwena Day Spa). She is also my life partner in that we continuously discuss and contemplate how to negotiate the future. She is my strongest critic and my staunchest supporter.

“If one were to look at the Orion Group portfolio, it would seem like it was ‘inherited’ or ‘bought off’. However, it is clear that the Orion Group success is truly home grown with the Gmeiner couple firmly at the helm.”

However, the path to success for Gmeiner was by no means an easy one, given that Franz was Austrian by birth.

“My career has taken interesting twists and turns from the start.

“During my third year of study at the then Rand Afrikaans University (RAU) I became restless and decided to switch to part-time studies. I realised that completing my degree was important and since auditing firms offered study leave at the time I decided to apply for a position as an articled clerk at one of the medium-sized firms. My application was successful on condition that I continued to study toward a B Comm accounting degree.

“I then converted my registration from a B Comm degree to the B Comm Accounting stream. I wrote the qualifying examination (QE) in 1983 and achieved Top 10 ranking.

“I wanted to try out the commercial world and joined Sentrachem as junior business analyst. After two years I realised that I wanted to do my own thing. However, a lack of capital limited my options. This prompted me to negotiate a partnership with a small auditing practice – A Cohen & Co, with six employees at one office in Johannesburg.

“The name was changed to Cohen & Gmeiner and the firm proceeded to grow in leaps and bounds over a 14-year period to become the 13th largest auditing firm in South Africa with offices in Johannesburg, Nelspruit, Alberton and Pretoria.” (No doubt, the phenomenal success of this firm could be attributed to the addition of the “Gmeiner” name and the drive that accompanied the addition!)

“During this period we needed larger office premises for our Johannesburg offices. The initial lease agreement with an option to purchase would become Orion’s first commercial property with the acquisition of the 11-storey Intec House on the corner of Eloff and Marshall streets in central Johannesburg.

“This was the start of what is today Orion Real Estate Ltd, which is listed on the main board of the JSE and in which I have a controlling interest.

“Along the way we invested in a hotel, office tower and retail complex in Braamfontein, Johannesburg. In 1999 the hotel operator/tenant could no longer meet the rental payment. Some desperate phone calls and contemplation later it was decided that I should take over the operations of Hotel Devonshire in Braamfontein. This was the beginning of what is today a portfolio of 13 hotels and lodges spread over South Africa and Lesotho. In other words, I took need, combined it with opportunity and courage, and created a career path for myself.

“Access to funding was always a challenge. Both property and hotel businesses are particularly capital intensive. With inadequate or mismatched funding one sometimes makes compromise decisions.

“Business challenges often become the seed for learning and new opportunities. With hindsight I should have nurtured some personal and business relationships more,” he concluded.

Gmeiner is bent on growing the Orion Group brand and expanding his operations. One of the passions that he shares with his wife is executive and business coaching. All management staff members benefit from this training and it provides fertile breeding ground for great team spirit and it is bound to be the impetus for propelling the group to greater heights.

“Our group has grown every year for the past 23 years. I see a diversified group with a strong focus on property investment and development, hotels and leisure and also the wellness industry.

“The book Clock builders and not time tellers has also been an inspiration because it provides comfort in the knowledge that great companies do not happen overnight and that one has to work at it for what may be a seemingly long time to develop a long-lasting company.

“We have a number of key focus points:

When Gmeiner is not crunching numbers and managing his proud investment, he loves cooking, particularly slow-cooking meat dishes such as short rib. He also loves watching cooking shows on television and his wife shares his passion for food shows.

Among his other pastimes are watching rugby, travelling the world, working up a sweat at the gym, and reading, of course.

“I love spending time reading about what makes people tick and how visualisation links to real life tangible manifestations. The limitless power of the mind via thought and mediation interests me tremendously. We also practice the principles of Feng Shui.

“I am a non-practising Catholic, but I do believe in the higher power of God.”

The many years of experience and the huge mountains that Gmeiner conquered make him seem like the proverbial Oracle of Delphi.

“Also very important to me is the knowledge that we will all leave this world as we entered. Therefore, accumulation of any kind of capital – whether physical or intellectual – must be put to good use. My purpose is to share my knowledge and experience with people and organisations that may find this useful. Furthermore, my accumulation of capital resources must find a way back to communities via upliftment, development and job creation programmes.”

Youngsters, especially those aspiring to be CAs(SA), can derive great benefit from listening to Gmeiner’s words of wisdom.

“Decide whether in fact you really want to become a CA(SA). Once so decided, put in all and every effort to attain this goal. This obviously means dedicated hard work. Once qualified the world becomes your oyster because your life will unfold in ways not imagined by you and I am testimony to the notion that one can live one’s dream.

“I also wish to take this opportunity to thank the many people who I have had interactions with in my life to date, both personally and professionally. Without their love, support, encouragement and even pushing and shoving I would not have achieved what I have.”

Orion is a prominent constellation located on the celestial equator and visible throughout the world. It is one of the most conspicuous and recognisable constellations in the night sky. It was named after Orion, a hunter in Greek mythology.

These words ring true for the group as well as for the hunter. The group is set on becoming more conspicuous as it evolves towards to global heights. It is clear that the “hunter” has some sort of entrepreneurial sixth sense to succeed in a highly competitive environment.

The place of many kudu

There comes a time when we feel the need to escape the concrete jungle and travel off the beaten track to a place where we can recharge our batteries and get back in synch with nature. While steeping ourselves in the clinical business world, we tend to become anaesthetised to the crisp fresh air of the great outdoors and the sounds of nature: the bird calls, the sound of bees buzzing.

If you are looking to exploring places away from the cities, Ditholo Lodge in Limpopo province is the right place. Ditholo means “the place of many kudu” and there are indeed large numbers of them at the lodge and surroundings. Other animals include giraffe, warthog, zebra, waterbuck, impala, blesbuck, blue wildebeest, and a lot more.

The lodge is situated about 165 km from Johannesburg on the road to Bela.

Win a weekend for two at Ditholo valued at R6000. Email your name and membership number to journal@saica.co.za with Ditholo in the subject line. Includes dinner, breakfast and two game drives.