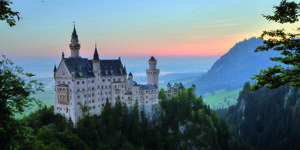 Germany is a country like no other … it’s less known (and even lesser understood) by foreigners than most other European countries.

If you think of a city in Germany, the name Berlin will probably pop into your head first – it’s surely one of the most fascinating cities in Europe, with a rich history. But after a visit to this beautiful country, I’m sure you’ll agree that the appeal of Germany is not limited to its capital.

Few countries have had as much impact on the world as Germany – they have given us the printing press, the automobile, aspirin and MP3 technology. It’s also the birthplace of Martin Luther, Albert Einstein and Karl Marx – you can trace their footsteps – poets such as such as Goethe, and great composers like Bach and Beethoven. All of the above have in some way left their mark on human history.

Germany is a country with something for every taste and preference. if you’re not a lover of art or classical music – or not even interested in the country’s rich history – you will enjoy the beer. It is excellent and derives from the sixteenth-century Reinheitsgebot (a regulation specifying three ingredients – water, malt and hops – for the brewing of beer). The food is hearty with a vast selection of sausages and cakes and pastries to die for. And should you’ve over-indulged yourself on food, beer and cakes, you will find a cure for it everywhere. With more than 300 Kurorte (health spas) and Heilbäder (spas with healing waters),Germany has a long tradition of spa destinations. It is the birthplace of naturopathic treatments, and health resorts and spas specialise in combining these time-honoured methods with state-of-the-art medical treatments. So if you’d like to unwind in a luxurious bath enhanced with mineral-rich salts or in one of the hot springs – there are more than 300 approved health resorts and spas in the country and you will never have to look far to find one close to where you’re staying.

As you travel the country you will have plenty run-ins with genius, but the fairytale landscapes will probably leave a bigger imprint on your memory – there is something about the way the scenery unfolds: dunes in the north, moody forests, romantic valleys, and the splendour of the Alps.

The people of Germany are just as diverse as the country. You may happen on a few officious Germans who complain about silly things such as not walking on the left side of the aisle when you’re shopping, but you will be struck by the warmth and open-mindedness of the people (particularly the younger ones). And you will be surprised to see law-abiding pedestrians waiting patiently for the light to turn green although there’s not a car to be seen for a kilometre – but that’s just one of the many pleasant surprises.

Speyer is a perfect town to stay when visiting the Black Forest in Germany – or even to explore the Rhine. It’s located beside the Rhine and is one of Germany’s oldest cities. At the Lindner Hotel & Spa Binshof with its spacious and comfortable rooms, you will be able to relax completely in the midst of a landscape surrounded by splendid lakes. Your wellbeing is always their first priority, and thevariety of wellness and spa treatments make the Lindner an exceptional place. Don’t be surprised to see people walking around in “spa-outfits” all day long.

This is the perfect city to be based when you’re visiting places such as Heidelberg and Rothenburg ob der Tauber.

Frankfurt is known as the business and financial centre of Germany and for its skyscrapers, but the best way to discover the city is to visit downtown – there you’ll see locals in the grassy parkland along the river Main tossing frisbees or enjoying beer at taverns. The Lindner Hotel & Residence Main Plaza is situated on the banks of the Main and you can watch all the hustle and bustle from your hotel room while revelling in views of the famous Frankfurt skyline. What’s more, you’ll be welcomed at the hotel with friendly smiles and helpful staff. You can explore German cuisine at the New Brick restaurant or Harry’s Bar. There’s also a Leisure & Wellness centre where you can recharge your batteries after a long day of sightseeing.

The Lindner Hotel City Plaza is situated near Cologne Cathedral and in the historic and trendy Friesenviertel district. It welcomes visitors and business guests from all over the world. With its 11 conference and event rooms, it’s perfect forconferences or events. You can expect professional service and friendly faces.

No amount of time spend in Berlin will ever be enough. The history, art, shopping and nightlife will keep you busy from dusk till dawn. It’s so diverse and amazing… you have to experience it yourself to understand it’s magic. The Lindner Hotel Am Ku’Damm is located in the very heart of the city and you will see visitors from all over the world enjoying the unmistakable atmosphere of the metropolis. The Lindner is also close to the Memorial Church, Berlin Zoo and all the main shopping streets – the perfect starting point for your voyage of discovery through the city.

For more information on the hotels visit www.lindner.de.

Only a few events in history really moved the world … the Kennedy assassination, the landing on the moon, 9/11 … and of course, the fall of the Berlin Wall in 1989. There’s very little left of the physical barrier, but the legacy lives on in places such as Checkpoint Charlie, the Berlin Wall Memorial and the East Side Gallery, which was painted by 118 artists from 21 different countries right after the fall of the Wall.

This is a real-life fairytale palace was commissioned by Bavaria’s most celebrated monarch, King Ludwig II, and was the inspiration behind the Disney movie Sleeping Beauty. The palace rises from the Alps like a painting, and inside the fairytale continues.

The Black Forest lies in the southwest. When you drive through the area it feels like you’re entering a wild, isolated place where time passes slowly. Here you will enter a fantasy world where you will encounter middle-of-nowhere lakes, the best Black Forest cake, and cuckoo clocks the size of houses.

The river Rhine flows from Rüdesheim to Koblenz and is characterised by vineyards, quaint medieval towns, castles and a legendary rock, the Lorelei. It is also one of few areas in the world where Eiswein (ice wine) is produced. Take a cruise along the Rhine to experience all the splendour on offer.

Heidelberg is home to Germany’s oldest university and the ruins of the castle inspired artists and intellectuals alike. The city was almost destroyed during seventeenth-century wars, but was rebuilt in the eighteenth century with baroque buildings. Today, it is a modern city where age-old traditions prevail.

Cologne has an almost mythical attraction and when you wander the streets you suddenly see it in front of you: the Kölner Dom – a twin-towered cathedral and icon in the city. Building started in 1248 and was only finished six centuries later. If you feel up to it, climb one of the towers for a breath taking view of the city.

The trademark of Berlin – and the main entrance to the city. It was surrounded by walls for thirty years and known throughout the world as a symbol for the division of the city. When the Berlin Wall was broken down the gate went from a symbol of division and oppression to a symbol of unity.

This city is well known for its well-preserved medieval walled town. Explore this wonderland at the most magical times: early or late in the day when you can soak up the romance or slowly stroll along the softly lid cobbled lanes.