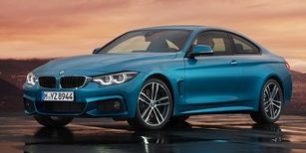 BMW recently refreshed its line-up of the 4 Series and introduced some name changes as well. The 440i test vehicle replaces the 435i. The nameplate ending with a ’5’ used to be known as the ultimate pre-‘M’ version, but this has now changed.

The new 4 Series has been given a few nips and tucks, thereby enhancing its overall look. The front and rear aprons have been tweaked and seem to be better carved out of the bumper, giving the car a lower and more brute look. The standard LED lighting ensures that the updated version is easily recognisable from the pre-facelift. The new headlights now feature twin LED semi-circle lights that extend towards the kidney grills. In keeping with this look, the rear LED lights also have two lines that have a squarish loop in the outer lights and stretch towards the centre.

Inside, there have also been some changes, which start with double stitching on all leather sections. The new digital dashboard looks much sportier and has some customisation as well. There is an upgraded sports steering wheel and high gloss surrounds the infotainment system. The iDrive system has also been updated and is now tile-based, making it easier to use.

The motor has been updated, now producing a healthy 240 kW and a whopping 450 N.m, translating into a very powerful machine. This, together with the updated suspension, enhances the experience of the 4 Series.

On the road, the car still feels a bit stiff, but that said, for a sports coupé it is actually very comfortable. The power is instantaneous each time you floor the accelerator and so is the melodious sound that emanates from the six-cylinder motor, which in turn raises the hairs in the back of your neck.

Overall, the updated 4 Series has raised the benchmark of sports coupés, so if you prefer a sports coupé that can be used to drive to work daily and transform into a thoroughbred track car on weekends, the 440i should definitely be on your list.

The popular Ford Ranger has just had a midlife makeover and we had the opportunity of driving the XLT 4×4 double cab variant.

To begin with, the new front end looks even more brute than before. The huge grill protrudes forward with ‘Ranger’ carved out in big, bold letters from the top section of the grill. Depending on the range, the grill comes in either charcoal or chrome. The chrome version looks more workhorse-like while the charcoal one looks a lot sportier – hence it is part of the Wildtrack range.

The new look makes the vehicle appear higher and bolder on the road. Added to this, there is a Highrider option, like on the test vehicle.

Inside, the cabin is very spacious with ample rear leg and head room. The seats are comfortable, but there is a lack of lumbar support in the front. The dashboard has a car-like look and feel while the steering wheel is light and easy to use. The touchscreen infotainment system is good, but the display could be bigger. The gearshift is typical 4×4 with fairly long throws.

The entire vehicle shakes to life as the diesel motor starts but, being diesel, don’t expect any roars. Being a double cab, keep in mind its size. This is by no means a small vehicle. Parking and reversing can be a bit tricky for a novice, but once you get used to its size it becomes almost second nature. This does have advantages, however, which are good cabin space and a decent load box.

Surprisingly, driving the vehicle is a lot of fun. You feel like you can drive over almost anything and to be honest, I think with this car’s off-road ability and diff locks, it actually could. The updated Ranger now also comes with some additional creature comforts like a lane-departure warning and an LCD display in the dashboard – to name but a few.

On the whole, the Ranger has always been a top contender and with its new updates, I think it will be even more appealing to those looking for the outdoor life and a workhorse.