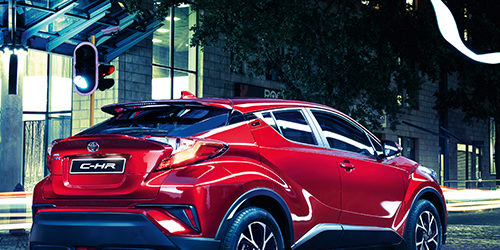 The SUV market has been a hotly contested one for a while, but Toyota has caused a stir in the small SUV market with its launch last year of the new kid on the block, the Toyota CH-R.

This new vehicle is compact yet has enough curves and jagged edges to compete with supercars. This radical new design cannot be mistaken for any other vehicle.

The front end has the trademark Toyota badge front and centre and the rather large headlights are reminiscent of the Corolla. The oversized bumper has a high hip section with a black grill section at the bottom. This adds to the sporty look of the car but also gives the impression of the car being higher off the ground than it actually is. The bonnet is flat with curved sections on either side behind the headlight. This is possibly the only flat panel on the car. The large, steeply raked windscreen is in keeping with the overall front proportions.

As you move to the side, it is confirmed that this is no ordinary Toyota. The bulging wheel arches, small windows and sloping roof give this SUV a sporty, almost coupé-like stance. The car has two creases along the side of the body: one high hip crease and another lower one that angles steeply above the rear wheel to meet with the tail lights. The rear doors have handles hidden in the C-pillar and are smaller than the front ones, which is in keeping with the coupé look. The challenge with this approach is that getting in and out of the rear space takes some concentration, or you will definitely hit your head on the way in or out.

The rear end is where things really get interesting, as the taillights bulge out of the body work almost like bug eyes. They then slope upwards towards the rear as it incorporates into the rear spoiler. That said, the car does have another rear spoiler above the rear windscreen. Between the sloping roofline and the spoilers, rear visibility is compromised to a certain degree. All around the bottom of the car is a black plastic wrap that also lines the wheel arches, in keeping with the SUV look.

Open the front door and you are welcomed to a very angular dashboard. Taking clues from some of the German marques, Toyota has mounted a screen above the centre of the dashboard for the infotainment system. The dashboard just below the screen is angled out towards the driver, which makes you feel like the dash wraps around you like a cockpit. The climate control buttons and display are placed on this section.

The seats sit high, so you feel like you are in a raised car, which many city drivers are looking for these days. This improves visibility, but the smallish windows all round reduce overall visibility. The space inside is ample for four, and a fifth will be fine as long as it’s a child. The rear seats are rather upright, to try and give added boot space. The boot is not huge as the spare wheel does take a large chunk of space away. Also with the high boot opening, you need to lift items quite high before they are loaded.

The 1,2-litre motor, matched with the manual gear box, was a pleasure to drive. The light gearshift and clutch made traffic a breeze and the overall fuel consumption was good. As this is a 1,2 litre, don’t expect to tow a caravan, but for day-to day driving and the occasional longer-distance drive, this vehicle is well suited.

Overall the exterior of the car was most striking and in electric blue did catch the eye of many an onlooker. If you like to be noticed while driving a car that has limited space and visibility, this is good fun to drive around. A definite sporty addition to Toyota.

AUTHOR l Torque Talk is a member of SAGMJ