Profile: Leading as a Team 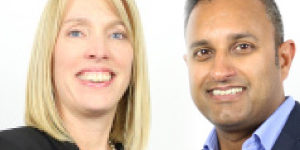 In September of 2018, Michelle Olckers CA(SA) and Anoop Ninan CA(SA) were announced as co-CEO’s of Mazars South Africa. They each share more about themselves and their journey to the top.

Michelle Olckers, a former University of Cape Town student, admits that her first steps in her chosen profession were uncertain ones. ‘Although I was always interested in accounting, I didn’t know specifically what I wanted to do after school, studying to become a chartered accounted seemed like the most sensible way to find out as it covered a broad range of subjects and allowed me to choose from various career paths on completion,’ she states.

Having graduated from the University of the Witwatersrand after attending school in Mafikeng, Ninan states that he was certain about his chosen career path from the start. ‘I decided early on in my life that I would follow in my father’s footsteps as a chartered accountant. Upon graduating I completed my articles at PwC before moving into corporate finance at EY,’ he says.