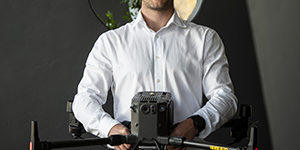 Before joining Drone Ops Group, Grant Greeff was the founder of an event hiring company for just under 10 years. His university start-up eventually grew to a team of 33 permanent employees before falling victim to the devastating consequences of COVID-19, which meant the company had to close down in 2020.

When asked why he chose to start a hospitality start-up in his second year of university, Grant answered: ‘There were two main reasons. First, I had been a waiter from 17 years old and was working at a fine-dining restaurant at the time. I was confident in my ability to serve others at events. Second, I needed to fund my studies and pay for living expenses as my family were going through tough times. I genuinely believe I would not have started the business with such urgency if it wasn’t for the need for me to be financially independent at an early age. My parents gave me the best foundation to take on the opportunity with both hands.’

“Anyone who wants to develop needs to find a mentor. I encourage every young CA(SA) to be open to engaging in a way where you don’t come with all the answers or statements; come with a lot of questions, eager to listen to a different point-of-view and learn from them”

Grant believes that entrepreneurship is the culmination of hundreds of little experiments that have the potential to create meaningful change for everyone involved.

Even though he had to make the call to close down his hospitality company, Grant still sees this as the most fulfilling chapter of his life thus far. ‘Being in a position to genuinely create an environment that enables people to empower themselves is very aligned to my purpose. I learnt from each person I had the privilege of working with. It was awesome to witness individuals flourish, grow and improve in the team.’

The lessons Grant learned through his life thus far, particularly this experience, were invaluable and have set him on a path of self-discovery.
For him, the most impactful and life-changing experience was finding a mentor early on in his business career. ‘I fundamentally believe that mentorship is the key to moving South Africa forward and upward. Not only does the mentee benefit, but the mentor benefits as well. For instance, I’m super excited that SAICA has launched a mentorship programme for young CAs(SA) to connect with experienced CAs(SA). I encourage all CAs(SA) to enter either as a mentor or a mentee.’

Grant credits Mark Sorour (previously the chief investment officer at Naspers Group, now a non-executive director) as his most inspirational mentor and guide in business. ‘He’s just been so consistent over the past eight years and has helped me look at the same situations from different angles. I’m forever grateful for this,’ says Grant.

‘Anyone who wants to develop needs to find a mentor. I encourage every young CA(SA) to be open to engaging in a way where you don’t come with all the answers or statements; come with a lot of questions, eager to listen to a different point-of-view and learn from them.’

From the beginning of the COVID-19 pandemic Grant decided to share his challenges and, most importantly, his learnings and philosophy around leadership and business life using the online LinkedIn platform. He has been humbled by the number of people who have engaged with him and follow his content. Within 12 months, his followers grew from about 400 people to over 3 000.

For professionals looking for advice around using LinkedIn, Grant advises: ‘Be you and be very clear about what message you want to share with people.

Before sharing anything on LinkedIn, I always question if my stories and opinions will inspire people to act positively or encourage them to reflect on certain aspects of life and leadership. I never deviate from this guiding principle, and it’s been gratifying to align with many people who believe in the same values and philosophies.’

Around June 2020, Grant reflected on what his vision for the near future looked like. With the support of his family, friends and fiancée, he decided to find an opportunity where he could work with an exciting and growing business and with a dynamic team. He shared his intention online via LinkedIn. ‘I was truly humbled from the responses I received, the support from people I had never met.’

Sean Reitz, CEO of Drone Ops Group (previously known as UDH Group), whom Grant met at the Entrepreneurs’ Organisation Accelerator chapter in Cape Town, reached out to Grant after reading his post. Sean mentioned that he needed someone to help strengthen the group’s financial systems and build out more integrated processes to scale up. Grant took on the challenge, and he started in September 2020.

Grant is the first to admit that the world of drones is quite a departure from the hospitality industry (no pun intended). However, according to him, creating value in a drone business does not mean you need to fly a drone. He explained: ‘The CA(SA) experience gives you a very clear understanding of business fundamentals, which is not necessarily industry-specific. In my leadership role, I don’t have to know how to fly a drone. I need to focus on understanding the environment in which our drone teams operate and do my best to influence the elements which contribute toward enabling each team member to empower him- or herself.’

What excites him is the opportunity to be part of a growing business, take ownership of particular areas, and build a work environment where people can thrive.

‘The truth is that no one can empower someone else. Only you can empower yourself. This means we need to focus on being a catalyst to help others empower themselves. To do this, we can positively influence the work environment by ensuring that team members have the right tools, candid feedback and space (physical and psychological) to empower themselves.’

When it comes to work-life balance, Grant believes that life is not separate from work. ‘Work forms a key part of one’s life. Instead of balancing life and work, I aim to establish boundaries throughout my day and week to ensure I prioritise the people and activities that help me move toward my purpose.’

For him, purpose is not an endpoint. ‘It’s a daily practice that genuinely gives you a feeling of fulfilment or, as Simon Sinek says, a “why” or “just cause”. My daily purpose centres on prioritising the act of helping people to empower themselves by influencing their environment, which involves the tools they use, the feedback they receive, and the space they’re given.’

Grant does not measure his success in financial terms. He measures success based on the number of people who have developed as a result of their environment in which he had an opportunity to positively influence in one way or another. Simply put, he asks: ‘What is the ripple effect of my actions?’

Sharing a weakness of his, Grant admits to being very critical of himself. ‘I tend to focus on my errors and not on my improvements. The consequence of being very self-critical is that I can be critical of others around me as well. This is definitely an imperfection of mine that I consciously aim to be mindful of and act on to be more patient with others.’

Grant has firm beliefs and values and is in no way interested in being a people-pleaser. ‘I’m very certain that many people completely disagree with my beliefs and the way I choose to do things. I’m aware that this approach has consequences whereby some people don’t enjoy my company as our beliefs are so unaligned. Still, I recommend sticking to your beliefs and values to attract the people that energise you. The real, sustainable advantage of any team is determined by how aligned their values are. Also, what is in our control is having a choice. And I choose to prioritise my time with positive and energising people and activities.’

Even so, he does not necessarily label himself as a leader. ‘It’s for those I connect with to decide if they consider me a leader. Notwithstanding what people think of me, I aim to practise leadership daily in the service of my team as a whole. People I consider to be leaders all act in the best interests of their team and not for themselves, and this is what I aspire to emulate through my actions as well.’

Grant believes it is the act of prioritising our passions that will truly shape South Africa and the World. He explains: ‘Where the majority of our time is spent does not determine the level of impact we have on humanity and our environment. It is what we choose to prioritise in our lives that will determine the legacy we leave for others.’

With his passion for everything he does, his focus to help others empower themselves and his ability to adapt and change when crisis strikes, his hunger for knowledge and willingness to push boundaries and challenge the status quo, Grant Greeff is sure to fly even higher and take the world by storm, no matter what!