Every type of inequality is magnified and exposed through COVID-19, which makes this Sustainable Development Goal (SDG) even more relevant and urgent right now. Its socio-economic impact on the poorest and most vulnerable of our society is expected to last for years beyond the pandemic and requires a specific and intentional focus by leaders across the board.

COVID-19 has caused seismic shifts across our planet and her people, fundamentally changing the way we live, dream and work. But it has also placed a magnifying glass on one of the world’s biggest challenges, namely inequality. The lives and livelihoods of the poorest and most vulnerable in our societies have been hit the hardest. Just think about the impact of COVID-19 on unemployment, food security and gender-based violence, to name a few.

According to Oxfam, globally the world’s top 26 billionaires own as much as wealth as the poorest 3,8 billion people. And this has only increased during the pandemic: the Institute for Policy Studies reports that billionaires got US$565 billion wealthier, making US$42 billion a week on average. Income inequalities are prevalent on a global scale and addressing this challenge is perhaps the most important issue of our time, as the knock-on effects of inequality impact all spheres of life, such as access to quality education and healthcare as well as our ability to address climate change.

South Africa has one of the highest inequality rates in the world in relation to income, which makes this SDG one that we can no longer ignore and in fact have a fundamental imperative to address should we wish to achieve the global sustainable development agenda.

Inequality within and among nations continues to be a significant concern despite progress in and efforts at narrowing disparities of opportunity, income and power. Income inequality continues to rise in many parts of the world, even as the bottom 40% of the population in many countries experiencing positive growth rates. Greater emphasis needs to be placed on reducing inequalities in income as well as those based on other factors including gender, age, race, origin, disability, sexual orientation, religion and economic status, to name a few.

Interlinkages with other SDGs

Gwendolyn Zorn, Head of Impact at Phatisa, an African sector-specific fund manager that invests in feeding and housing Africa, notes that without robust and inclusive economic growth, the attainment of the SDGs will be impossible. As a result, Phatisa has included SDG 10 as part of its investment focus areas, which also include SDGs 1, 2, 5, 8, 11 and 13.

In addition to the above, SDG 10 is inextricably intertwined with some of the other SDGs:

South Africa ranks first of the 19 most unequal countries in the world with a Gini coefficient of 0,64, which is 50% higher than the global average. The situation has been worsened by the polarised labour market, characterised by high wage inequality.

There are several drivers of the high inequality of incomes in South Africa:

The annual Sustainable Development Goals: Country Report 2019 – South Africa evaluates the country’s progress and contribution to each SDG. Since SDG 10’s main purpose is to reduce inequalities, primarily economic inequalities, progress can be measured by monitoring the income growth of the bottom 40% of the population of the country. The growth rate of consumption in South Africa was high in the period up to 2011 but significantly reduced between 2011 and 2015. However, analysis of the growth trends shows a fundamental shift: although national consumption declined between 2011 and 2015, consumption by the bottom 40% increased, albeit at a lower rate. This shows that there was a transfer of economic gains towards the bottom 40%, even when the economy was slowing down.

Another metric is the proportion of South Africans who live below 50% of the median income, which has increased, albeit by a small percentage, from 2006 to 2015.

Finally, an increase in the labour share of GDP is expected to drive inequality in South Africa downwards. Labour share of GDP has been on a steady upward trajectory, at an average annual rate of 1,2% from 2007 to 2017, leading to reduced inequalities.

These statistics prove that progress has and can be made but bringing this SDG to the forefront of our business intention is critical to ensure momentum.

How businesses can get involved

‘Businesses are engines for economic growth and reducing inequalities, having the potential to create jobs, foster economic activity through their value chain, and contribute tax revenues for public services and infrastructure,’ Zorn explains. She further notes that business can also exacerbate inequality and its structural drivers if leaders do not make a conscious effort to understand their company’s impact on the planet and its people.

There are several key business themes addressed by SDG 10, including:

There are many ways that businesses can contribute to reducing inequality, for example:

Labour-intensive industries such as agriculture, agro-processing, manufacturing and tourism have a direct impact on reducing inequality. Zorn adds: ‘At Phatisa, we invest in high-growth-potential companies, which are addressing food security challenges in Africa. As a direct result of Phatisa’s investments, African livelihoods are sustained and improved through the creation and the preservation of decent jobs. We are not only improving the lives of our direct employees, but also those in our supply and distribution chains as well as the end customers. By backing local food-related companies, we have also reduced the need for imports, which contributes to the development of thriving domestic economies.

‘Other industries’ examples that positively impact inequality include education, healthcare and financial services, especially when directed at the bottom of the pyramid consumer/end-user.’

Conclusion and call to action

Every business in South Africa has the responsibility to make a positive contribution to reduce inequalities, especially while we are experiencing the impact and aftermath of this global pandemic on livelihoods. The private sector is critical in achieving this goal through driving sustainable economic growth, creating quality jobs, paying taxes, implementing equitable policies and improving access to those living in poverty. As the late Nelson Mandela said: ‘As long as poverty, injustice and gross inequality persist in our world, none of us can truly rest.’

Accountants sit at the heart of South Africa’s economic survival and recovery
May 5, 2021 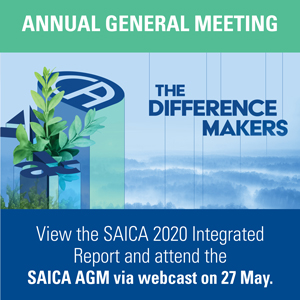