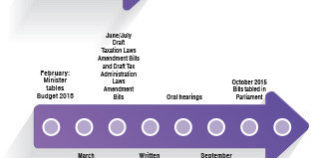 National Treasury’s budget-setting process is quite complex, yet transparent and robust. This ensures that proper stakeholder consultation and input are taken into account before the final Tax Amendment Acts are signed into law. Muneer Hassan explains the process and how SAICA contributes to it:

The Finance Minister tables the annual budget in February the following year. This is followed by written and oral presentations by stakeholders to Parliament’s Standing Committee on Finance. In June/July, the Draft Taxation Laws Amendment Bill and Draft Tax Administration Laws Amendment Bill are released for public comment. These Bills give effect to the budget proposals announced in February by the Finance Minister. This is again followed by written and oral presentations to Parliament’s Standing Committee on Finance. In September, National Treasury provides oral feedback on the responses to Parliament’s Standing Committee on Finance, which is followed by a public written response document. The Bills are usually tabled in Parliament at the time of the medium-term budget policy statement and are finally signed into law in December or January the following year.

SAICA, through its National Tax Committee, makes significant contributions to this process in the interests of its members and broader society.

SAICA provided written comments on the fiscal framework and revenue proposals tabled together with the 2015/16 budget, which was followed by oral presentations made to the joint Standing Committee and Select Committee on Finance on 5 March 2015.

SAICA in general commended the Finance Minister and his National Treasury team for producing a balanced budget under very difficult economic circumstances and conditions.

The National Development Plan (NDP) is the country’s roadmap for collective investment into the future and contains the fiscal policy setting out the framework to fund this roadmap. To achieve the objectives of the NDP and maintain a balanced withdrawal from the economy in the form of taxes, South Africa will require growth rates in excess of 3%.

Following the financial crisis, the World Bank, the International Monetary Fund (IMF) and National Treasury predicted that South Africa’s growth rate would be above 3% for the 2015/16 year. This figure has been continually revised downwards, however, and the 2015/16 budget proposals are now based on a growth rate of 2% for the 2015/16 financial year.

As we are already exceeding the ideal levels of tax extraction from the economy, coupled with reduced growth rates, SAICA proposed a review of the NDP goals to better reflect South Africa’s ability to achieve these goals, which aligns with the revised budget forecast.

SAICA made the following policy proposals in this regard:

Government’s role in expanding the economy is to provide an enabling environment such as infrastructure.

It was noted that the investment in road infrastructure will increase from R51,2 billion (2014/15) to a mere R52,8 billion (2017/18). This amount should be seen in the context of the fuel levy, which is budgeted to generate around R57,2 billion in the 2015/16 fiscal year. We have been underspending on road infrastructure historically, and SAICA pointed out that we were not even spending the fuel levy collected.

In our view, especially pertaining to rail infrastructure, expanded investment is required to expand our railway network, which forms the backbone of the movement of bulk goods in our economy. The overuse of our road infrastructure has led to the costly degradation of our roads at the cost of our economy.

We commended government for the amounts committed to social protection expenditure, as this confirms government’s commitment to assisting those that are most vulnerable within our society. We noted, however, that we would like to conduct further research as to whether the cash payment model is the most efficient and beneficial manner in achieving government’s social obligation.

Though significant resources are budgeted for education, we are concerned that too few resources are invested in upskilling the currently employable population. In our view mere academic education and employment without skills transfer will not uplift the current generation to support a production economy.

We also mentioned that ‘key for stability is that our sovereign credit rating does not move downwards’.

According to Dawie Roodt, at the end of December 2014, total outstanding gross state debt amounted to R1,8-trillion, which is equal to about 47% of gross domestic product (GDP). This debt consists mostly of bonds but other instruments such as treasury bills and foreign loans are also included.

Key to meeting the deficit targets will be reaching the Treasury’s economic growth forecasts.  The Minister predicted economic growth of 2% for this year, which is sharply down from the 2,5% projected in October’s medium-term budget policy statement.

ESTIMATES OF INTEREST AND DEBT-SERVICING CHARGES

According to Minister Nene, debt-service costs continues to be the fastest-growing component of main budget expenditure, increasing by 10,1% in nominal terms over the medium term. The costs of financing government debt are projected to increase from R115 billion in 2014/15 to R153,4 billion in 2017/18, accounting for 3,1% of GDP.

This is driven by the increase in government borrowing since 2008/09.

The Minister also indicated that, over the next three years, capital will be the fastest-growing category of non-interest spending. He acknowledges – rightly so, in our opinion – that rising debt-service costs, which amounted to R115 billion in 2014/15 alone, threaten the sustainability of social gains achieved over the past decade.

The budget review makes it clear that government aims to roll out procurement reforms, including an online tender system that enhances public scrutiny, strengthens competition, and levels the playing field for small businesses. It is also stated that government’s immediate priorities are framed by the nine-point plan to boost growth and create jobs, and it also includes unlocking small business potential.

It has always been SAICA’s view that the tax administrative and compliance obligations of small businesses are burdensome. We welcomed the fact the 2014 budget review acknowledged that red tape and bureaucracy are hindrances to doing business, especially for small and medium-sized firms and that government aims to streamline the regulatory regime. That budget review mentioned the introducing of reforms that ‘would reduce compliance costs and facilitate access to equity finance’..