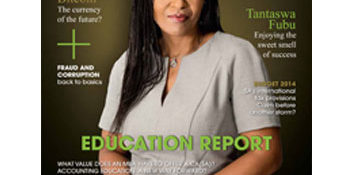 The world’s population reached 7 billion in October 2011 and this inspired a US organisation called 100 People Foundation to do some research and frame the global population as 100 people based on the statistics gathered.

The statistics make for interesting reading. Of the 100 people representing the world’s population 83 would be able to read and write, but 17 would not; 7 would have a college degree and 22 would own or share a computer; 77 would have a place to shelter them from the wind and the rain, but 23 would not; 1 would be dying of starvation and 15 would be undernourished; 87 would have access to safe drinking water, but 13 would have no clean, safe water to drink.

In 2006 only 1 person out of 100 would have had a college education – today the number has jumped to 7, partly due to advances in higher education in Asia. And as a Chartered Accountant, you are part of the 7 per cent who are fortunate enough to have a college degree.

For some the road to qualifying as a CA(SA) was more challenging than for others, but in the end they did make it. I’m sure at times you also thought it was a never-ending road. If you’re still a trainee you might think of giving up, but if you just hang in there you will get there. If you think that your circumstances are limiting you, have another look at the statistics above and you’ll realise that you’re already far better off than the majority of people in the world.

I’d like to share two stories with you that will make you realise that you should never allow anything to stand in the way of fulfilling your dreams.

Vusi Nkabini qualified this year as a CA(SA) at the age of 52. He had to overcome many challenges and face countless adversities before he could write this coveted title behind his name. We will publish his story in the May issue.

The story of Monique Peres on page 53 is proof that nothing is impossible. Monique has quadriplegic cerebral palsy and despite her disability will qualify as a CA(SA) at the end of the year. It is said that some people with cerebral palsy experience cognitive difficulty because the damage has affected multiple areas of the brain. But Monique says: “My disability has not held me back from achieving what I want out of life. You should be strong and motivated and do everything possible to reach for your dreams. I believe that my life has no limits. Take responsibility for your lives. Never give up on yourself. I consider myself a winner.”

Meeting Monique has changed my life. She is living proof that you can achieve anything you set your mind to and that you should never let anything prevent you from fulfilling your dreams.