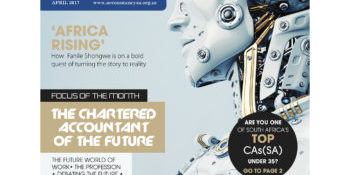 Today we continue to find ourselves on the brink of a technological revolution that will fundamentally alter the way we live, work, and relate to one another. It’s already been termed the Fourth Industrial Revolution and in its scale, scope, and complexity, the transformation brought about by it will be unlike anything humankind has experienced before.

Klaus Schwab, the founder and executive chairman of the World Economic Forum, says that we do not yet know just how it will unfold, but one thing is clear: the response to it must be integrated and comprehensive, involving all stakeholders of the global polity, from the public and private sectors to academia and civil society.

The First Industrial Revolution used water and steam power to mechanise production. The second used electric power to create mass production. The third used electronics and information technology to automate production. Now the Fourth Industrial Revolution is building on the third ‒ and this is the digital revolution that has been happening since the middle of the last century. It is characterised by a fusion of technologies that is blurring the lines between the physical, digital, and biological spheres.

Everything is changing at a radical speed and everywhere you can read articles about how future jobs are at risk of being replaced by robot labour. A few years ago research by the Oxford Martin School at the University of Oxford suggested that 47% of the jobs in the US are at risk. This is supported by theoretical physicist and futurist Michio Kaku – he says that any job that requires repetition of work tasks is at risk, but the jobs that will be saved in future are the ones that robots are not able to do. For example, jobs that require intellectual capital and common sense will survive – jobs that involve creativity, imagination, leadership, analysis, science, or writing.

At SAICA we are also well aware of the fact that in order to remain relevant, we need to change. And this has a direct impact on the way we educate and train prospective CAs(SA) and assist our existing members in upskilling themselves, as well as on the role the profession plays in society.

In the feature that starts on page 14 of this issue, Mandi Olivier (Senior Executive Professional Development at SAICA) discusses what SAICA is doing in this regard.

SAICA recently commenced formal research into expected competencies of CAs(SA) in the future. This project, titled CA2025, will undertake a number of focus groups and one-on-one interviews over a two-year period in order to best understand how and what we need to change what CAs(SA) should be able to do in the future.