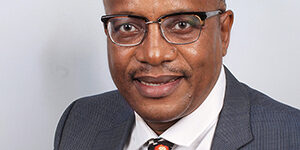 A courageous leader is daring, different and fearlessly walks toward challenges. They act ethically when faced with difficult choices and choose courage and integrity, despite the repercussions.

Ignatius Sehoole CA(SA) accepted the role of chief executive officer at the embattled KPMG when most would not have. At the time the firm was deeply associated with first state capture, and then the collapse of VBS Mutual Bank.

He is also a member of the specialist committee on company law. He has held positions with several companies including Transnet Ltd, Fedics Food Services, Murray & Roberts, PricewaterhouseCoopers and MTN. Previously he served as the Executive President of SAICA for two consecutive terms.

His first job was at Consol Glass, where he decorated glasses. He earned around R80 per week and gave it to his mom to help support his family. At some point in his life, Ignatius was also a truck driver.

Having been expelled from university for striking against corruption – he arranged a protest after the university misappropriated boarding and lodging money –Ignatius has always set himself apart as a voice of justice and reason in the business world. This has helped him become one of the most well-respected voices in the South African audit profession and the man picked to rebuild a battered KPMG.

He tackled the challenging task of rebuilding and restoring the firm’s reputation head-on and while he took very specific steps within KPMG’s walls, Ignatius also believes that public trust in the audit profession must be rebuilt by every individual involved in the financial reporting space.

Ignatius embodies ethical leadership through his belief that a leader ought to demonstrate conduct for common good in all situations – whether you find yourself in a business environment or so-called private capacity. He believes that leaders are forerunners and as such have a responsibility to set an example of ethical conduct even outside of the formal business arena.

To restore perceptions of public trust, Ignatius has placed a renewed emphasis on values and ethics within KPMG SA with the expectation that its value system will extend from employees’ professional into their private lives.

“Partners, trainees and employees at all levels must realise that joining KPMG is a lifestyle choice, and they must align with what we stand for. We expect our people to be accountable and trustworthy in their professional, social and political lives, as they represent the company wherever they go. Employees are expected to exemplify and live the firm’s values in their day-to-day lives, representing and indicative of their overall character. People that do not buy into our value system should not feel at home at KPMG. They should feel uncomfortable amongst us and that they do not belong. All partners, associate directors and board members, including independent non-executive board members, as well as their spouses and dependent children, are required to undergo extensive lifestyle audits and integrity checks. These integrity checks include tax compliance and an audit of SARS filings performed by an independent firm that reports its findings to KPMG’s global head office,” Ignatius explains.

The one thing Ignatius would like to fix in South Africa is the issue of corruption. If he could tell his younger self one thing, it would be to “always be vocal about what is right and stand up for what you believe in.”

Ignatius personifies courageous, ethical leadership. He believes a leader should demonstrate conduct for common good in all situations – whether in business or your private capacity. “Your behaviour in your private life is the best demonstration of your true character – and therefore if you cheat outside business, we do not wait for you to cheat inside our business as well.”