COVER STORY: Conducting as a CEO 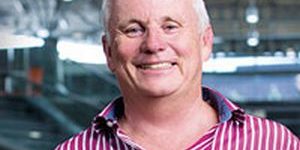 Devoted to one family and one firm, Andrew Hannington CA(SA) says he follows the Japanese model. Read his secrets of being a solution-finder and juggling the role as CEO of Grant Thornton JHB and his big family. Lynn Grala interviews him.

Asked to describe his role as CEO, Hannington says: ‘I’m a conductor; I get all the moving parts to work together like the instruments in an orchestra. I also see myself as a storyteller. Right now, I’m telling a story not about me, but about Grant Thornton Johannesburg – and that’s a story I love to tell!’

How do his partners describe him? With his insurmountable energy and the vision and passion he puts into building Grant Thornton as a business, they say he is 59 going on 39.

Joining him on a grand tour of the brand-new Grant Thornton Johannesburg office in the Wanderers Office Park, Illovo, the description given by his partners becomes all the more credible, as we can barely keep up with him as he flies up the flights of stairs.

‘If you can’t keep up, take off your shoes!’ he advises us behind him.

At the top he shows the grand overview of the remarkable three-storey building illustrating a modern, vast open plan area and an art gallery whose walls are yet to be graced with the finest pieces collected over the past 50 years.

‘The building lends itself to open plan, and that’s something new to all of us,’ says Hannington. ‘We’re so used to being in our little offices where we can shut the door and hide behind our files and books and get on with our work. We have three of the business units which are in closed-off areas for confidentiality reasons, but the rest is very open plan, and we are getting used to that.’

Beautiful trees have been planted in the atrium, as well as in and around the building, appropriately symbolising their pay-off line, ‘an instinct for growth’. ‘That’s what the marketing team came up with. And it certainly is looking good,’ adds Hannington proudly.

It has only been a couple of weeks since the ‘big move’, so the firm is still very much in the throes of unpacking boxes and builders are still scattered throughout dealing with the last of the finishing touches. It’s an exciting season for Hannington as it marks a milestone in the history of the firm: it’s the first time the partners and directors become the owners of its premises. It is also a giant step in the merger journal between Grant Thornton Johannesburg and the former PKF Johannesburg. Finally, all +470 staff will be working and having fun together in its own state-of-the-art environment.

GOING BACK IN TIME

How Andrew initially landed in the CA(SA) profession goes back a long way. ‘At school in Port Elizabeth I did a subject called Accountancy. My first exam I got a 100%. My second exam 98%. My father was an accountant, and from school it progressed through to university. I have never looked back.’

‘And I have yet to go for a job interview. In all my 35 years of practice, I have not had an interview.’

Hannington started out at a small firm called Strelitz and Mitchell. There were six partners when he joined way back in the late seventies. Soon after qualifying he took a transfer to the Johannesburg office, also a small office with only six partners. In 1986 they merged with what was then Fisher Hoffman and progressed to where he finds himself today, as CEO of the Grant Thornton Johannesburg office.

‘It’s been rough at times, it’s been bumpy at times, it’s been boring at times, and we’ve faced adversity at times. But the secret is to stick to it.’ Says Hannington: ‘I’m loyal to one family, one firm. And I guess I follow the Japanese model. It’s very different to the model we find in corporate South Africa and the corporate world. The average life span of a CEO in America is three years in a large company. Well, I’ve been in this position for 20 months and over six years in the pre-merger firm.’

MORE ABOUT THE MERGER

The merger of two proud audit and advisory firms was not an easy process, but Hannington believes his company is now in a strong position to face the competition.

‘It was hard. We got into a situation where PKF was losing members worldwide. They’d lost the UK firm, they’d lost the Australian firm, so we were concerned as a group in Johannesburg about the brand PKF.’

After being approached by Grant Thornton, another mid-sized firm and one of the big four, among the 15 directors the most appealing merger candidate was Grant Thornton and within eight weeks they had consummated the deal. Since the merger, everything has slowly come together successfully.

‘The biggest challenge is that this is a people’s business. We need to get 60 directors to work harmoniously, whether they are male or female, young or old, black or white, ‘ he says.

‘We’re not only CAs(SA) in this business: 50% of the turnover of GT Johannesburg comes from the audit side of the business; the other 50% come from advisory, tax and outsourcing. We’ve got guys who are MBAs and who have doctorates; we’ve got highly skilled people.’

Hannington’s greatest aspiration is to double the earnings of each of the directors from when he took over almost two years ago. He would like to reach this goal before 2020.

When asked what type of personality he has, he replies with a straight face: ‘Absolutely introverted; absolutely in a shell.’ Then, laughing, he adds: ‘No, I’m an outgoing person! I do sit for long hours at night reflecting and scheming, but I’m an entrepreneur. I’m a solution finder – always looking for solutions. When a professional battles with a solution, they’ll come up with a technical answer, but when it comes across my desk, I’ll give it a good run-over and ask how can we come up with a better solution that will work for our entrepreneurial clients.’

Hannington has signed off hundreds of audit reports, fair and reasonable opinions, valuations, and pro forma financial information. The corporate finance arena is where Andrew’s true passion and joy lies: when he’s hard at work on the listing of a new company.

‘I’m happiest when I’m busy on a listing of a company,’ he says. ‘Fortunately for us at GT, we are registered with the JSE as reporting accounting specialists. Many of my fellows in the profession have grown up with their clients companies, but unfortunately they are not registered with the JSE. This plays into our space as they come to us, and we take on the listing process. After that we become the auditors of the companies that grow from small to medium and big firms.’

Hannington surrounds himself with the smartest of the smart people: ‘I’m not intimidated by the fact that four of our directors are studying towards their doctorates. I surround myself with good people who tell me what I need to know to make decisions as a leader.

‘Technically, I’m not the strongest individual in the organisation by far. The youngsters who are just out of university and been on the road for a short while can teach me a lot about income tax, about IFRS, about auditing, about the various aspects of the business. The only thing I have is a commercial mind, a lot of grey hair, and I’ve been around the block in the last 35 years in the profession.’

Being a CEO involves making many decisions, and as a wise man once said, there is wisdom in many counsellors. Hannington’s personal decision-making approach is exactly this – to be consultative. Walking the passages, he discusses issues with his fellow directors as well as with outsiders who are his supporters. He also has a business coach, apart from his wife.

‘You put all of that into the melting pot and come up what you think is the best decision for them. Sometimes three weeks down the line you realise it was the wrong decision, but then you have to be brave enough to admit you made a mistake, brave enough to say you don’t know all the answers, brave enough to change the decision.’

One morning, many years ago, Andrew found himself facing one his greatest career challenges – he received a summons of more than R650 million. ‘You can imagine that was a huge summons for an auditor with few assets – daunting and frightening. You realise the issue of limited liability and the risk you put yourself through on a daily basis when a partner down the passage signs off on a set of financial statements which can result in a massive claim against the firm.’ But we got together and soldiered through the situation and came out better people, stronger entrepreneurs. We didn’t lose our nerve; we didn’t lose our heart.’

Although Andrew admits that with the merger his work–life balance ‘has gone out of the window’ and his family might say he has no interests and hobbies besides Grant Thornton, he does try his best to switch off when he gets home and spends some quality time with his family.

Hannington has been married to Gwyn for 34 years. They have five children and three grandchildren, whom he adores.

Saturday evenings will see him switching off his iPad at around 18:00 and packing away his books until 18:00 on Sunday: ‘I observe my 24 hours of no work time, in church and with the family. I’ve learnt from my Jewish partners – and I’ve had Jewish partners all my life – the quality of that one day out of seven, and I try and respect that. I don’t have client meetings on a Sunday, and I don’t work on a Sunday.

‘Gwyn and I also take short holiday breaks throughout the year, which also gives time to reflect and plan.’ Exercise is a long walk with Gwyn each workday morning, starting just after five.

‘We have a motor boat in which I rush around Hartbeespoort Dam on Sundays with my family. I’m past the age of skiing and wakeboarding, but I love the air rushing through my hair … What hair I’ve got left!’