Out of the comfort zone

Ronel Jooste believes that the beauty of being an entrepreneur lies in the fact that whatever you can envisage, you can put into action. And she should know – as a financial consultant, speaker, author and guesthouse owner, she has actioned her entrepreneurial dreams and it has changed her life. In 2019, Ronel earned nine awards, including Africa’s Most Influential Woman in Business and Government in the Financial Sector at the CEO Global Pan African Awards.

Ronel admits that, at the prime of her corporate career, she could never have imagined the immense satisfaction she would derive as a business owner. True; as a child, she had looked up to people who had stepped away from the employment mainstream – but, she says, growing up in Krugersdorp, there weren’t many examples of successful entrepreneurs to emulate.

Nonetheless, her dream of becoming a businesswoman led her to study toward a CA; a qualification that helped her reach the heights of the group financial reporting division in a large listed financial services firm. ‘I am proud to be a CA,’ she acknowledges.

Ironically, it was when she reached the apex of her corporate career that she started imagining what life could be like away from the corner office. ‘I felt boxed in,’ she admits. ‘I felt that there was something bigger out there; I had so many interests I wasn’t exploring, and I wasn’t serving my purpose of helping others.’

A significant period of introspection followed – and, at the end of it, Ronel had a clear idea of the path she wanted to follow. Her first step: With her sister, Marli, she established PhysEQFiT Guesthouse in Centurion. PhysEQFit embodies everything she and Marli stand for: ‘The “Phys” symbolises my interest in fitness while EQ speaks to Marli’s background as a psychologist. “Fi” refers to my desire to empower people from a financial perspective,’ Ronel explains.

Her empowerment mission began with Joyce and Evah, who are now part of the management team at PhysEQFit. Although the pair joined as cleaners, Ronel and Marli were eager to help them reach their full potential –so they asked what areas of responsibility they would like to assume. Joyce gravitated towards office admin while Evah opted to attend cooking classes so that she could become the guesthouse chef. She’s since gone on to win third place in the Domestic Worker of the Year Award, and both are now attending computer courses and working towards their drivers’ licenses.

PhysEQFit has reached out to the broader community, too, offering eight internships to students from the Down Syndrome Association of South Africa.

Meanwhile, having set up FinanciallyFITLife, an entity specialising in financial consulting, training and employee financial wellness programmes at the same time as the guesthouse, Ronel was making moves to uplift people in other areas, too. ‘I’m passionate about financial education,’ she enthuses. ‘It never fails to amaze me that this vital subject isn’t taught at school.’ As a result, the number of people who feel that they have a weak grasp of their financial circumstances is considerable – even professionals working in the financial services industry have approached her for help, Ronel reveals. She has leveraged a number of channels to spread her message: a sought-after speaker, she contributes to numerous publications and has hosted a talk show on a radio station.

That’s quite an accomplishment for a woman who confesses that in her previous life as an article clerk, she was extremely shy. ‘No one who knew me then would imagine that I am able to do what I do now,’ she laughs. Certainly, they wouldn’t picture her addressing the 600-strong audiences that are now a regular feature in her engagements.

Be that as it may, Ronel’s skilful handling of her subject, combined with her dynamic forays into other areas (she recently set up a property company focusing on sales, development, investments and education), earned her nine awards in 2019, including Africa’s Most Influential Woman in Business and Government in the Financial Sector at the CEO Global Pan African Awards, the Woman of the Year – Overall Winner at the I am a Woman, I Have a Purpose Awards, and runner-up in the GWOP Business Woman of the Year Awards. She was also the Woman of Wonder award winner at the Panache Internationally Acclaimed Annual Gauteng Awards and a Top 10 finalist in the Woman Entrepreneur Magazine’s International Awards for Inspirational Female Entrepreneur and was nominated for the Woman of Stature’s Woman in Finance Award as well as the Woman of the Future Award by Fair Lady and Santam.

Another of her most recent accolades recognises her charitable initiative, the Ronel Jooste Dream Foundation, which aims to take financial literacy to the community. ‘My goal is to help people gain a keener understanding of financial management so that they are able to make better financial decisions – which ultimately translates into living better lives. So often, it’s money that stop us from having dreams, so I want to give people the skills and tools they need to start dreaming again,’ Ronel says. She explains that a portion of the proceeds of all sales of her recently published book Financially Fit and Wealthy (for which she received the AfriCAN Authors Award in the financial literacy category) goes to the foundation. The project was recognized with a silver award in the Old Mutual CEO Volunteerism Awards.

Ronel’s string of accolades belie the struggles she’s faced – on many fronts. ‘Starting the guesthouse was particularly difficult,’ she recalls. ‘At the time, neither of us had any experience in hospitality. We didn’t even have a database.’ Fast forward four years and PhysEQFit has an enviable reputation and a clutch of loyal clients – especially among corporate and sport tourists – who return again and again.

What sustained her while she was facing these challenges? ‘I was already used to managing stress from working in a deadline-driven corporate environment – although, admittedly, the stress of running the guesthouse was a lot more difficult to handle. The pressures of the workplace are set in a controlled environment, but the guesthouse lacked that structure. I found myself dealing with a lot of unknowns. We had to figure things out as we went along.’

Ronel’s natural competitive instinct was a help in this regard. ‘I’ve always been this way – if I’m running and you cut in front of me, I will chase you!’ In the business world, this manifests in a determination to do whatever she undertakes to the very best of her ability. ‘Obviously, overcoming obstacles requires a lot of dedication and perseverance, but it’s also about understanding that there is a bigger vision for your life, and viewing those stumbling blocks as stepping stones to where you want to be.’

She also firmly believes in taking action to correct areas that need improvement. ‘When I wanted to become a speaker, I joined Toastmasters, and last year earned my CC10 accreditation,’ she says. ‘I think it’s vital to have a vision for your life, but you also need to be prepared to take the steps required to make that dream come true. You can’t aspire to be a speaker if you don’t do what it takes to get on stage.’

Given her interest in fitness, it’s not surprising that exercise is also a major stress release. ‘Running is like a moving meditation for me. I use my runs to plan my day, to prepare my talks and write my articles in my head, so that by the time I sit down at my desk, I’m ready to go.’ Indeed, fitness informs every aspect of her life, to the point that she themed her book about personal finances around exercise; for example, unit trusts are likened to a gym circuit and property investments to endurance training. Her enthusiasm stems from the many benefits of exercise, which go beyond the health aspects: ‘It’s about discipline and goal-setting,’ she points out. Having completed a diploma in personal training, she hasn’t ruled out the idea of adding yet another arm to her entrepreneurial ventures by setting up a fitness biz.

For the time being, though, she’s content to focus on entrenching the Ronel Jooste brand. She’s looking forward to becoming even more established on the speaker circuit, and also foresees a time when the hospitality portfolio expands to include more guesthouses, along with the game lodge and wellness centre she has always dreamed of. ‘These businesses are so diverse, but they all speak to the various parts of my personality. That’s precisely what was missing during my time in corporate. And that’s what I love about entrepreneurialism – it allows you to be who you want to be. I even got a chance to participate in Mrs Pretoria Tshwane during 2018 and was crowned first princess. It’s great to be in a space where you can nurture and develop all the separate aspects of your life – I think it’s the secret to fulfilment. Yes, managing all the different tasks associated with each entity can be stressful – but it can also be incredibly energising.’

Ronel channels that energy to keep improving her offering. She vociferously devours material, from podcasts to books, attends seminars and spends time with her mentors, so that she can constantly hone her insights and ensure they are on target. This process means that her services evolve organically on an ongoing process – as the recent launch of her programme ‘Live Your Best Life’ shows. ‘I’m often asked how I managed to achieve certain things in life or business, so I decided to package everything I’ve learnt into a 30-day challenge.’ This is typical of Ronel’s never-ending search for The Next Thing. Her head spins ceaselessly with ideas, she says, and she has a list of things she would like to try that just keeps growing. She believes this is an almost inevitable outcome when you step out of your comfort zone. Once you’ve been through the initial pain of adapting to change, navigating uncharted territories becomes much easier – and the urge to keep stretching yourself by trying something new becomes almost irresistible.

What else has she learnt on her entrepreneurial journey? ‘Never underestimate yourself, or the impact you can have,’ Ronel insists. ‘Don’t allow other people’s opinions to determine who you are and what you can achieve. People have a habit of expecting accountants to behave a certain way – but you don’t have to live up to their preconceptions.’

With that in mind, her own future goals centre on living a healthy, active, happy and financially fit life, living her best life and achieving her full potential in every area – taking small steps to her ultimate destination. 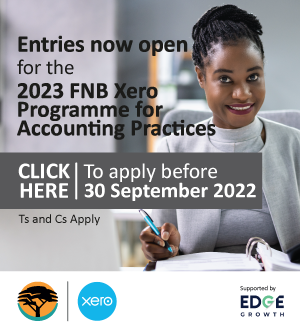