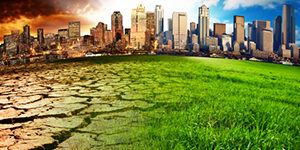 Limiting global warming to 1,5 °C is essential to South Africa’s socio-economic survival, and it requires an immediate and strong commitment from the public and private sectors.

In the summer of 2015/16, South Africa experienced one of the worst droughts ever recorded in the country. Its effects on the economy were severe, with food prices pushed up due to crippled key crops, including maize, our nation’s staple food, and sugar. In 2019,  Cyclone Idai ripped through villages and towns in Mozambique, Malawi and Zimbabwe, taking hundreds of lives and leaving a trail of destruction.

Speaking at a presentation on climate change hosted by RMB Morgan Stanley, Professor Francois Engelbrecht of the Global Change Institute of the University of the Witwatersrand, and one the world’s leading specialists on African climate change, said that subtropical developing countries are among those most affected by the projected impacts on economic growth in the absence of climate change mitigation.

South Africa is already extremely vulnerable, he said. ‘We need to make a commitment to strong mitigation of climate change, or our way of life will be changed forever. By that I mean we are likely to see, for example, the complete collapse of our maize crop as there is no variety that will be able to withstand increases in temperature of between 4°C to 6°C.’

The same is true for cattle farming. According to an agricultural census released by Statistics Botswana, the country’s estimated cattle population fell from 2,5 million in 2011 to 1,7 million in 2015 as a result of the prolonged drought.

To date, human-generated emissions since the start of the Industrial Revolution have led to global warming of 1,0 °C. If these emissions continue at current rates, we are likely to reach warming of 1,5 °C between 2030 and 2052 – an additional increase of 0,5 °C from today’s level.

According to UN body the Intergovernmental Panel on Climate Change (IPCC) even if we could stop all carbon dioxide (CO2) emissions being released into the atmosphere, the global temperature would stabilise but not decline. The sea level would continue to rise during this time as the entire ocean volume slowly expands in response to past surface warming. Under the Paris Agreement, 195 countries committed to limiting global warming to well below 2 °C and aiming to keep it below 1,5 °C.

‘While limiting global warming to 1,5 °C is still possible, countries around the world would have to act rapidly to achieve this goal,’ says Professor Engelbrecht. ‘It means that our global CO2 emissions must be reduced to effectively zero over the next few decades, through large, sustained emission reduction efforts across all global regions and economic sectors.’

The IPCC’s 2019 report notes that climate change manifests itself on different timescales affecting both short-term extreme weather events, as well as causing gradual, long-term changes, including sea-level rise, melting of glaciers and ice sheets, and changes in biodiversity. ‘The impact of climate change on a community depends not only on the rate and size of the physical changes in climate but also on how exposed their location is and how vulnerable to the change they are. Adaptation is made more difficult because we can’t predict exactly how the climate will change in a given place in the future.’

‘The last five years have been the warmest five years ever recorded in southern Africa,’ said Professor Engelbrecht. ‘Over much of Angola, Namibia, Botswana, Zimbabwe and the Northern Cape, the drought is lingering, and the number of heatwave days is on the rise. Subtropical regions of the world are warming faster than tropical landmasses, which we can clearly see in parts of Australia, South America and southern Africa. The Paris Agreement is critically important to us is we are going to have to find ways to mitigate climate change.’

He noted that Johannesburg is already 2 °C hotter. ‘We are warming at about twice the rate of other regions. The risk across the board to the agricultural sector is enormous, with limited options for adaptation in a region that is already dry and hot. The drought in the Western Cape attracted much attention, but we seem to have forgotten that at the end of 2016, the Vaal Dam was at 27%, seriously compromising the Gauteng water supply. The impact of no water on industries and power generation would be disastrous.”

The next decade is decisive

As South Africa’s economic powerhouse, Gauteng needs to consider how climate change will affect its people and economy. A 2019 McKinsey commentary, ‘Earth to CEO: Your company is already at risk from climate change’, called on CEOs to act now to mitigate the economic effects of climate change. ‘Business leaders can no longer ignore the physical effects of climate change, at least not without peril. Global infrastructure, supply chains, food systems, asset prices, land and labour productivity, and economic growth itself are increasingly at risk of deterioration due to a rapidly changing climate. And a more connected global economy means that risk in one part of the world will often extend well beyond the place of immediate impact.’

McKinsey says all businesses can take the following steps right now to be well-prepared for climate change:

Assess and plan. Conduct a detailed review of all the potential risks to your enterprise from physical climate risk. Use the latest climate modelling and look for systems within or connected to your enterprise that may fail as the world gets steadily hotter and more volatile. For construction, how could high temperatures impair outdoor working hours? For agriculture-based industries, how could drought impact yields?

Protect your assets. Create a set of resiliency and adaptation measures to reconfigure internal operations and supply chains, redirect capital to growth areas and new business, and protect assets. Utilities, for example, can strengthen their grid, make new investments in energy storage and microgrids, and work with new partners to finance resiliency strategies.

Decarbonise your operations. Consumers are demanding climate-friendly products and services and that demand will only grow. Take carbon out of your operations if you want to be credible with consumers and regulators.

‘Business has a wonderful opportunity through corporate social responsibility initiatives to pave the way for what we could be doing. The National Business Initiative (NBI) is attempting to lead the way, but further research is needed. I strongly believe that we have to have plans and policies in place that address the very particular needs of South Africa, which are different from those of the northern hemisphere, where much is the research is being conducted. Industry leaders need to think about short-term versus long-term risk.’

Noting that many industries may face transgressive change, where whole systems have to shift, Vogel stressed the need for trust relationships informed by social science between government and industry.

Pursuing mitigation targets must be an international trend if we are to meet the challenging yet still technically achievable goals set by the IPCC. The question remains whether South Africa, and the broader continent, will continue to feel the heat from fossil fuels like coal, oil, and gas, or get on board and be part of the transition.