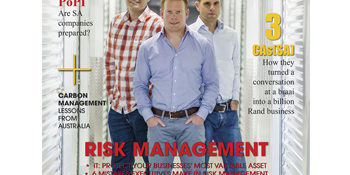 With the passing of Nelson Mandela, we all thought about the future that he dreamt about … where all South Africans are equal and work together to bring about security, peace and democracy in our country.

He also dreamt of an Africa which is at peace with itself. He dreamt of the realisation of unity whereby leaders can unite in their efforts to improve and solve the problems of the country.

We also think about the future, but sometimes dreaming about the future can create dissonance. On the one hand we would like to imagine a country that is at peace; we travel to work with flying cars to avoid e-tolls and everyone gets along with everybody else. Love thy neighbour … On the other hand we become discouraged by reality and imagine a future that’s almost the same as now – only with smaller tables, better gadgets and very fast Internet.

But maybe things that are happening today that might just create a very bright future for Africa. In an article in  Harvard Business Review (October 2013), Jonathan Berman gives reasons why Africa’s time is now.

To start with: Africa’s US$2 trillion economy is growing faster than the economies of all other continents. About a third of the 54 African countries are seeing annual GDP growth of more than 6%. And it’s not just about diamonds and oil: only 24% of the growth from 2000 to 2008 was attributable to natural resources.

Now you might wonder what is making our diverse and complex continent boom:

Stability – debt and inflation have decreased significantly over the past decade.

Africa will soon have the world’s largest workforce – it will swell by 163 million this decade and by 2050 Africans will account for 25% of the world’s workers.

Governments in Africa are investing in education, with 20% of spending being allocated to it.

Africa contains most of the world’s uncultivated arable land. With 60% of the world’s potential farmland, Africa could become an agricultural powerhouse.

If the time for Africa is now, then imagine what a role we as South Africans and particularly CAs(SA). can play in this bright future. It’s the perfect time to look for investment opportunities and to be part of the development of our great continent.