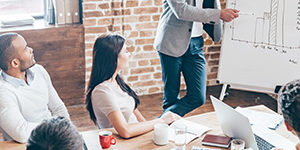 Holding a functional leadership role
isn’t the most direct route to becoming
a CEO. Fewer than 15% of the CEOs
in a data set we’ve been scrutinising
for more than a year ascended to
the corner office after serving as a
functional leader such as chief financial
officer, chief marketing officer (CMO),
chief strategy officer, chief technology
officer (CTO), or general counsel.
Nearly all the rest had been operators
− CEOs at other companies, leaders
of major operating divisions, or chief
operating officers.  Read the full article here.