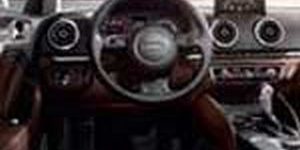 Now in its third generation, the Audi A3 has firmly entrenched itself in the market. In this latest guise the A3 is evolving into a more sophisticated and polished version of the young upstart. Nothing is out of place, from the smooth silhouette of the bonnet all the way to the newly designed rear lights. In keeping with Audi tradition the headlights have a trademark LED look (optional Xenon lights) that immediately distinguishes the A3 from other Audis.

Inside is where things have really changed. Gone is the traditional dashboard and in its place is a rather minimalist dashboard that only has turn dials for the climate control. Above this is a uniquely styled section that houses the hazards, anti- skid and the drop-down screen. That’s it – there are no other buttons on the dash, not even a radio volume control.

All the additional buttons have either been incorporated into the MMI system or moved to where the manual handbrake would be. The radio control is just a knob and the MMI system has shortcuts to the navigation, radio, telephone and media source. The dashboard is almost Zen-like, in that you actually feel calm and peaceful – rare when driving in Joburg peak hour traffic.

There are some attractive finishing touches in the car too, with courtesy lights in the foot well and on the door handles. But the best touch, in my opinion, was the LED lights surrounding the inside of the cup-holders, which add that elegant exclusive look. For a vehicle of this standard the A3 is unusual as it does not have wood or metal inlays, but rather a grained plastic, which seems to work well. My only criticism is that the cabin is too sombre with its shades of grey.

The space in the car is what can be expected from the Germans, in that it is big enough to fit five, with ample head and leg-room for all. The boot too is a fair size for a hatch and offers an interesting feature in that the floor can be raised to create a flat bed when the seats are folded, or dropped to provide additional boot space.

On the road the car is well balanced and has sufficient power to surprise most sceptics as to the capabilities of a 1.4 litre – it could eagerly take on a normally aspirated 2.0 litre. The one thing that stood out in this car from most in this segment, is its silence. At idle you have to check the rev counter to confirm that the car is on, and on the road you can have a whispered conversation at any speed legally allowed on the road.

I think Audi have upgraded from original idea of having a fun run-about about to having a fun sophisticated run-about that is so much more than just a city car. So if you are looking for just a snazzy city car, Audi now has the A1 – but if you want more, take a good look at the A3.