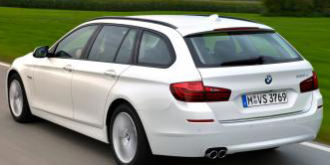 In 2017, amidst much fanfare, BMW launched the all-new 5 Series. With the new Mercedes-Benz E-Class starting to take centre stage and hardcore BMW aficionados expecting only the best from their beloved brand, the new 5 Series certainly had a lot to live up to. But has it delivered? To start with, the refreshed look has done away with the recognisable V on the bonnet from the BMW badge expanding out towards the windscreen. Instead, BMW have gone for a cleaner bonnet with accents on either side of the grill. This, together with the wider grill and redesigned headlights, gives the car a more muscular and elegant look. Gone are the round fog lights replaced by an elegant line of LED lights. In keeping with the new design, the twin round headlight surrounds have been replaced by a more angular version with an open top. Gone is the bonnet dropdown that included the grill and instead there is a more modern grill that is separated from the bonnet.

The side view brings the 5 Series more in line with the prestigious 7 Series. This is thanks to the inclusion of a chrome-covered vent placed just behind the front wheel at the bottom of the wheel arch. The door handles are also more sleek and angular. The infamous shark fin antenna on the roof remains but has been stretched to create a more refined look.

The rear end looks much sportier and less bulky. The rear lights have a new elegant LED design and are narrower than the previous version. The high-level rear reflectors have been moved down and the squared tail pipes give the car a much sportier appeal.

All this makes the car look much more modern, but the biggest changes are inside the vehicle.

To start, the entire dash display has been changed to an LED screen, which means just like the 7 Series, you can individualise the displays to your liking. This includes changes in dials depending on the drive mode selected. This goes from blue in economy mode to red for sport mode. In keeping with all new BMWs, the central screen mounted above the air vents does not have a cover above it, but it’s a rather slim design, making the dashboard look more airy and spacious. The air vents below have also been changed from small rectangular ones to larger ones that, together with the entertainment and ventilation controls, create an almost diamond-like look. What’s also new is that the wood inlays have now been included in the dashboard.

The addition of gesture control is also welcome, and although currently it is more of a gimmick, I can see many more gestures added in future. The best one though is the volume control: a circle of your finger increases or decreases the volume. The new seats have spine-like stitching down the seats which not only looks good but also makes the seats much more comfortable. The legroom front and rear has been improved, and so has the boot space.

The 2,0-litre diesel motor I tested had ample power for the weight of the car and fuel consumption was nothing more than impressive. The car never felt sluggish or lacking in ability, whether on the open road or doing short trips around town. The remote key impressed not only me but many a passer-by. It is rather large and also displays important info such as whether the car is locked and the fuel range left. But the main reason is the remote drive that the key allows. Although this is an optional extra, it is one I would gladly pay for. I am often parked in thanks to inconsiderate drivers, so you need to try and squeeze back into the driver seat. That is now a thing of the past … All you need to do is activate the key which then starts the car, and with a swipe of your finger on the screen of the key, the car reverses out of the tight parking bay and you can easily jump in and drive off. This can also be done when parking the car.

On the whole BMW has not only reinvented the 5 Series into a modern, elegant, yet sporty sedan, but it has also raised the stakes with its technology and creature comforts. This has been done so well that it is not just a threat to the E-Class but also BMW’s own 7 Series. This new 5 is definitely sheer driving pleasure.

Advice: A community of solvers coming together to make a difference
December 13, 2021