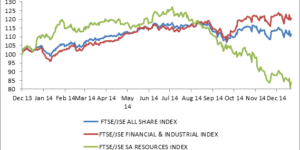 The dramatic collapse of the oil price during the final quarter of the year was probably the most important macro-event of 2014. Oil fell from $91/barrel at the start of the fourth quarter to $55 at the end of the year. It fell further in the first two weeks of 2015 to around $48/barrel. Since the slump in the oil price is more due to supply factors than demand factors, it is net positive for global growth and inflation. Supply has surged over the past five years, mainly in North America, due to technological improvements and the incentive of a decade of high real oil prices. While demand growth is weaker than expected – mainly from China – there is no global recession (unlike the 2008 oil price collapse).

Global market returns in the final quarter of 2014 were impacted largely by two factors: the collapse in the oil price, and the strong dollar. These two factors have continued to influence markets in January. The former obviously led to share and bond prices of producers and related companies falling. It has also lowered inflation expectations globally. The latter meant that most markets outside the US were negative in US dollar terms even when positive in local currencies. In dollar terms, only US equities posted a decent return of 11% in 2014; other equity markets from Europe to Japan to the emerging markets were negative or at best flat. The dollar has surged further against the euro with the expectation of the European Central Bank (ECB) announcing a full-scale quantitative easing programme this week, with some of the legal obstacles now cleared. Meanwhile, the Federal Reserve is still expected to start gradually hiking rates later this year, although they might decide to wait if core inflation in the US falls.

In anticipation of the ECB’s actions, the Swiss National Bank (SNB) abandoned its three-year old Sf1.20 per euro ceiling, causing an unprecedented 15% one-day surge in the franc against the euro and pretty much every other currency. Consequently, the Swiss benchmark equity index dropped 14%. The SNB’s action added to what is already shaping up to be a volatile start to the year on world markets.

2014 was a good year for bonds, against expectations
Bonds rallied as a result of declining inflation expectations during 2014, despite most investors expecting yields to rise. The 10-year government bond yield for the US fell from 3% at the start of 2014 to 2.19% at the end, and German yields from 1.9% to 0.55%. More dramatically, Italian yields fell from 4% to 1.8% and Spanish yields from 4.1% to 1.5%. In other words, Spanish yields went from being considerably higher than US yields to being considerably lower in the space of 12 months. These yields have fallen further in 2015. South African yields also fell in the course of 2014, leading to strong returns from long bonds (13%), bank shares (30%) and listed property (27%).

Massive divergence on local equity market
The respectable 11% return of the JSE All Share Index in 2014 hid the massive divergence between sectors. The gap between the FTSE/JSE Resources Index (the ‘Resi’, which lost 14.7% in 2014) and the FTSE/JSE Financial and Industrial Index (the ‘Findi’, which returned 19.5%) was the largest since 2003. This was despite the Resi starting the year stronger. The collapse in commodity prices, especially oil, has seen the share prices of local and global resources companies fall in sympathy, with further sharp falls experienced last week. These companies still have to announce their earnings for the fourth quarter, so investors might be in for a further nasty surprise. It is an open question whether current valuations – which are low at first glance – truly reflect the new reality. Resource companies have tended to be big components of local and global benchmark indices, and therefore widely held in investor portfolios (Sasol, Anglo American and BHP Billiton are local examples; Shell and BP would be British examples). This has led to a sense of gloom among many investors. But it is worth repeating that the falling oil price is good for the global economy – it is just that the losers are concentrated while the winners are widely dispersed. The losers also feel the pain rather quickly while the winners will see the gradual benefit. In the meantime, the adjustment process on markets is not smooth, but it will also come to an end.

Oil’s Christmas gift to South Africa
The slump in the oil price helps our economy in four ways. While the rand has weakened by about 9% against the US dollar in 2014, the oil price fell by much more (it is worth noting that the rand strengthened against the euro in 2014). The rand oil price has therefore fallen 50% between mid-2014 and last week.

Current account deficit improves
The current account deficit narrowed somewhat to 6.0% of gross domestic product (GDP) in the third quarter according to the latest Reserve Bank data, from a revised 6.3% of GDP. It remains large by international standards and is a headache for the Reserve Bank, but there are definite signs of improvement. Export volumes grew faster than import volumes in the third quarter, while export prices improved relative to import prices.
An average oil price of $60 in 2015 could reduce our import bill by up to R60billion per year (around 1.5% of GDP). The current account deficit should shrink meaningfully provided other commodity prices don’t fall further, and the non-commodity trade deficit continues to improve.

Lower inflation takes pressure off the Monetary Policy Committee
Oil prices of $50 to $60 in 2015 could see inflation bottom below 4% and average around 4% in 2015 – well within the South African Reserve Bank’s (SARB’s) target. It also automatically means higher, more ‘normal’ real rates even without hikes. A smaller current account deficit, and potentially more gradual US rate hikes than previously thought, will remove some of the external risks, with a large part of the currency adjustment surely behind us. While we are still in a gradual hiking cycle, it is possible that the next rate hike could only be in 2016.

Relief for consumers and opportunity for businesses to capture some margin
Relief for consumers will be quite immediate as the petrol price falls. It amounts to more than R1billion per month in savings for South African households. Retail sales data for November released last week already shows a modestly improving trend in spending. If the annual growth in nominal incomes of around 7.5% in 2014 persists and inflation falls towards 4%, real income growth of 3% should result in spending growth of a similar magnitude. The outlook has therefore improved substantially since late last year.
The business environment remains very competitive and some of the cost savings should be passed on. This means that the prices of other goods will probably rise slower (or could even fall in some cases), providing further relief.

More options for Minister Nene to close the Budget deficit in 2015
South Africa avoided a credit ratings downgrade in December, with Fitch citing the commitment to fiscal consolidation demonstrated in the October mini-Budget. The most recent budget numbers, for the fiscal year to end November, show that revenues are growing ahead of budget and expenditure is growing slightly slower than planned. This is encouraging, suggesting South Africa’s ‘twin deficits’ are on track to being smaller in 2015. The lower petrol price affords the Finance Minister the opportunity to fund some of the R12billion in planned tax increases for the coming fiscal year from a fuel levy increase, rather than through higher VAT or individual tax rates. A 50c/litre hike in the petrol price could raise R10billion of the R12billion needed. This is doable with another petrol price cut expected in February.

All in all, the local economy could deliver a positive surprise in 2015, which again was unthinkable two months ago (stronger than expected growth will also help Minister Nene fill the state’s coffers easier). For this to happen, we’ll need fewer strike interruptions and for electricity supply disruptions to be limited. The former is not entirely unlikely, as most major sectors are now locked into three-year wage agreements. However; the latter is the dark horse for 2015, as persistent electricity outages will likely limit economic improvement.