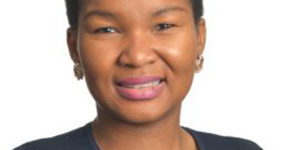 Zizipho Nyanga has been at the helm of Old Mutual‘s Masisizane Fund for six months after taking over the role of CEO in October 2016.

She was recently welcomed by Old Mutual who held an event to introduce her to its beneficiaries and team members.

Nyanga hails from Mthatha in the Eastern Cape, a former entrepreneur, she has years of experience in development finance having worked for the Industrial Development Corporation (IDC) as a financier in health services.

She has a BCom accounting degree from the former University of Transkei and a post graduate diploma from Wits University. After graduating, she started her career in finance as a trainee at Ernst and Young (EY).

In 2014, Nyanga joined Old Mutual, where she was appointed head of Post Investment Monitoring and Business Support of the Masisizane Fund. Two years later she was asked to take over Simpiwe Somdyala as CEO​.

Nyanga credits her past experience for helping her to prepare for the new role. “It wasn’t easy switching from Post Investment to CEO, but my role in Post Investment prepared me for this role because it gave me exposure to all of the different sectors we fund and to all the clients. [This together with] Simpiwe [Somdyala] really pushed me.

“It’s still a huge task and I didn’t think it was going to happen so soon, but I’m enjoying the challenge,” said Nyanga.

The Masisizane Fund was created in 2007 from R1 billion in unclaimed shares during Old Mutual’s demutualization process. An agreement between Old Mutual and the Treasury would see the unclaimed money go towards a good cause – funding majority black-owned small businesses.

“An organisation like Masisizane is a necessity in South Africa because we need to develop entrepreneurs,” said Nyanga at the event.

In the last 10 years, the fund has helped both rural and peri-urban township businesses in the agribusiness (primary and agri-processing), franchising and commercial, supply chain and manufacturing sectors.

“We lend money to majority black-owned companies in rural areas. We fund businesses in agriculture trying to get all those small farmers and help them along the way and hopefully graduate them into agro-processing so they can make more money and not only rely on primary agriculture.

Masisizane has had some successes developing the country’s SMEs.

One of their success stories is CTU Manufacturing Corporation, a hospital linen and apparel supplier. The company was established in 2008 by three women: Nonhlanhla Mphachoe, Nontokozo Ngcobo and Busisiwe Bhengu, who were present at the welcoming. After a slow start, in 2013 they approached Masisizane for funding. They say what they received was much more.

“Little did we know the transformation that was going to occur the day we met Mr. Somdyala and the team. We met with Zizipho, the executive team and some of the management team, and they helped us strategise, [they] accompanied us to customers, suppliers and investors. We’ve never had such a thing before,” Mphachoe said.

Today, the founders say CTU Manufacturing employs up to 70 people and has a steady revenue stream.

Mphachoe said they are excited to see what Nyanga will accomplish during her time as CEO.

“We are grateful to be led by a lady this time around. As a woman entrepreneur she understands our problems. As women we have social issues and she understands,” said Mphachoe.

Nyanga said she is also eager to tackle issues faced by women entrepreneurs.

Nyanga said she hopes to use her time as CEO to make a difference.

“What excites me is helping people, I’m making a difference in people’s lives. There’s nothing I dislike as much as rejecting a request from a client looking for funding, so I always try and find a way to assist them,” Nyanga said.

“I think we are lucky to be part of Old Mutual, which is committed to social economic transformation. My hope for the next 10 years is that Old Mutual supports us more and invests more in Masisizane so we can make a bigger impact. In the years to come I hope to achieve much more and make a bigger impact in terms of creating jobs, socio-economic transformation, creating entrepreneurs and creating legacy businesses that don’t only exist for a short period, but exist for a lifetime.”