PROFILE: Based in Beautiful Berlin 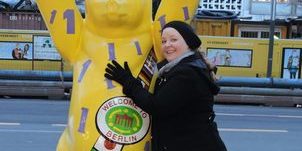 Stephanie Davis says international experience has changed her whole approach to tackling her many tasks.

Being based in Berlin, Stephanie Davis works with a number of regions. In the process, she has learned there are many ways to achieve the same goal.

One just needs to be open to experimenting and embracing new ideas and be sensitive to cultural differences.

Your current job title and name of the company you’re working for?

Describe yourself as a person

I am very driven and welcome a challenge.

What do you love most about Berlin?

It’s a city that is steeped in history but at the same time, it is modern and fast paced.

It is also very multicultural and everyone is encouraged to celebrate their differences.

How long have you been living there?

Three and a half years.

How has your CA(SA) qualification benefited your career?

As a CA(SA) my qualification is recognised internationally, which opens up many opportunities.

An interesting lesson you have learned in Berlin?

I have learned to be more flexible as I do not only have to comply with IFRS for group reporting but also with local GAAP in many countries.

What are some of the challenges you have encountered in Berlin?

The language has definitely been the biggest challenge.

Is there a community of South Africans living in Berlin?

Yes, there is a small community of South Africans here and throughout Germany. We get together from time to time for a braai.

What do people do in Berlin to relax and enjoy their free time?

Berlin comes alive in summer and everyone spends as much time outside as possible whether it’s relaxing in a park or swimming in one of the many lakes around the city.

What is the quality of living like in Berlin?

Berlin is described as poor but sexy. Evidence of the division is still visible in the architecture around the city, but most flats have been renovated internally over the last 10 years. It is a very family- and pet-friendly city with a lot of communal spaces. The transport system is one of the best in Europe and it runs 24 hours a day.

What do you miss most about South Africa?

What does a South African earn in Berlin?

€40 000 – €70 000. The tax system has different rates based on the social situation, including marital status and number of children.

What is the cost of living – rent, food, electricity, water, gasoline, entertainment, etc?

Rental prices have increased significantly over the last few years due to the increasing popularity of the city. A two-bedroom flat is about €800 a month but food and entertainment prices are fairly low compared to most European cities.

Based on these factors, can a South African go to Berlin to save money or is it difficult because of the cost of living?

It is definitely possible. Although the salaries are lower than in other parts of Germany, the cost of living is a lot lower, too.