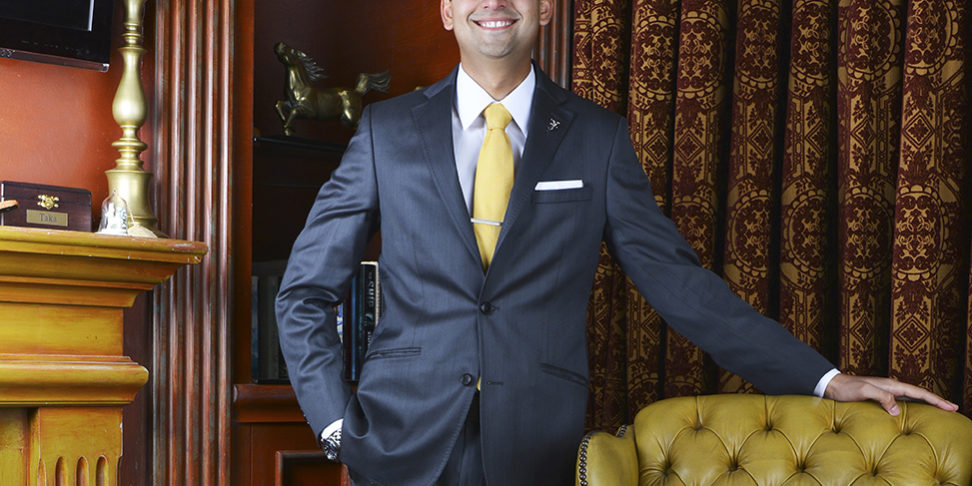 Shaah Bootha stepped right out of high school at 15 to pursue a BCom degree at North-West University. Going beyond just qualifying as the youngest CA(SA) in South Africa, Shaah proudly ranked in the Top 10 Honours Roll too. And no – he is anything but a nerd!

Shaah’s Bootha’s two older sisters, Saffiyah and Farzeen, both also CAs(SA), describe their brother as a little spoilt, a bit of a clown and sometimes cocky. But Shaah does not agree completely. Instead, he sees himself as the Tony Stark (Iron Man) of auditing.

A well-rounded, highly intelligent individual, Shaah is athletic and exudes great social skills, getting along with practically anyone he meets. Also the owner of a great sense of humour, he is said to tease his sisters. And that explains a lot.

‘I am, however, extremely competitive,’ he adds candidly. ‘This carries through to my work, so those working with me might sometimes find me quite demanding.’

Shaah is always proactive and would not hesitate to take the initiative. In a situation where a decision has to be taken, he has the ability to persuade others to see it his way. This quality has made his colleagues at work, and others around him, often rely on him on certain important matters.

So what motivated Shaah to complete Grades 8 to 12 in less than half the time it usually takes? ‘My parents sold me on the idea of being one of the youngest people in the country to have finished high school,’ he says with disarming honesty. ‘The idea of my achievement being reported in newspapers all over the country as well as on radio and television was an added motivator.’

One can understand from whom Shaah has inherited his intelligence. His father, Professor Akbar Bootha CA(SA), is the former director of the School of Accounting Sciences at North-West University and has been instrumental in assisting youngsters, often from impoverished backgrounds, achieving their dream of becoming CAs(SA). Many of his students are now highly successful leaders in South Africa. Shaah’s mother, Shireen, has also been a backbone to her children’s success, diligently home-schooling Shaah while instilling high standards and values for life. Shireen is a qualified school teacher and has a Master’s degree in Industrial Psychology.

‘We were taught certain basic values, which certainly had an impact on the way I think and behave today,’ says Shaah. ‘From childhood, my dad instilled in us the importance of honesty in our dealings with others and respect towards all, no matter what the person’s status in life. We were also strongly encouraged to give our best in whatever we undertook. Although my father is very happy that my two sisters and I followed in his footsteps and became CAs(SA), it was actually my mom who wanted us to go that route. We often tease her that if she could have helped it she would have included the designation on our birth certificates,’ he quips.

Other than the motivation from his parents, realising his dream was up to Shaah. ‘In my first year of high school I registered for Grades 8, 9 and 10 with a private distance learning institution,’ says Shaah. ‘In my second year (Grades 11 and 12) I enrolled at a government school for examination purposes but continued studying from home.’

No doubt, attaining the big dream had its gruelling moments. To young Shaah, self-discipline was at times a bit challenging. ‘Although my parents and private tutors monitored my progress and encouraged me, when and how to do my school work was my responsibility,’ Shaah continues.

Putting the dream to work

Following a normal school timetable as far as possible, Shaah would study on his own in the mornings, working on tests and assignments. He did this with limited supervision from his parents. His parents ensured that his studies were supplemented several afternoons a week with private tutors in Mathematics, Accounting, English and Afrikaans. ‘My parents felt (and rightly so) that it was risky to leave these subjects for me to do by myself,’ says Shaah. Being a born achiever, each year he participated in an Eisteddfod, an annual performing arts and speech and drama competition, where he always received Gold Star awards for the various items he took part in.

The home-schooled teenager took holidays just like his peers. Socially, he kept in touch with some friends from primary school and he had his two older sisters to contend with! Being an avid sportsman, he obtained provincial colours for cricket (representing North West Province country districts at junior level). He joined the local cricket club until he completed his undergraduate degree at university.

Because of the number of out-of-town audits he is involved in today, Shaah has unfortunately had to give up playing club cricket for now. ‘I was passionate about it, but had to stop as I could not make it to the regular practice sessions held during the week.  Golf has also been neglected recently, which resulted in my triple-digit handicap, but I do want to start focusing on it again soon. So, at the moment, I am an armchair sportsman,’ he laughs.

Shaah does, however, have a number of other interests too. ‘Since childhood I have been in the fortunate position to have travelled abroad extensively; I really enjoy exploring different places. I also enjoy movies, TV series, outdoor activities and spending time with friends and family. I see myself as a bit of a foodie as well.’

Next phase of the journey

His final matriculation examinations were externally supervised and marked. His goal achieved, Shaah matriculated at the age of 15. He then started studying towards his BCom at North-West University. At 18, he started a BCom Honours. Despite being several years younger than his classmates, he was treated like any other student. ‘And that’s what I wanted,’ he adds. ‘I have always been one of the guys.’

Shaah understood from an early age that winning comes at a price and requires great effort. ‘My father told me, “Choose a profession of your liking, but whatever you choose, make sure you are the best at it. Don’t be afraid or ashamed of working hard to achieve what you want.”’

Brought up to think of others, Shaah would also sacrifice some of his Saturdays to help tutor fellow students who were struggling at university.

A work ethic of note

‘This was part of my upbringing and the great role models I’ve had to look up to. There is no substitute for working hard to achieve your dreams. I worked very hard for my qualification. Nobody can say they became a CA(SA) without making big sacrifices.’

While the constant desire to be successful may increase the risk of burn-out, Shaah offers a simple solution. ‘You need to ensure that you do not bite off more than you can chew.’

Registering as a CA(SA) at just 23 (in 2016), when most of his peers had not yet finished university, Shaah was the youngest qualified CA(SA) in the country. Today he is a manager in PwC’s Assurance Division and is based in the Mafikeng/Lichtenburg office in North West, where he did his articles. He is involved in the audit of various public and private companies and their subsidiaries, as well as the public sector.

What does he enjoy most about his job? ‘Interacting with other people outside my own organisation and observing different business methods and processes. These are opportunities unique to auditors because you are engaging with more than one organisation at the same time and the knowledge and experience you gain from them is something that is not readily available to everybody.  I find it enjoyable to chat to people who are passionate about their business and to hear from them the challenges they face and their plans to overcome such challenges.’

Among his career highlights was passing his final board exam while an employee at the firm in 2015. ‘The Territory Senior Partner for PwC Africa (CEO) phoned me when the results were released, congratulating me on making the Top 10 Honours Roll.’ Shaah  was one of more than 2 050 candidates that passed the SAICA exam.

He was also awarded the PwC Experience Award. This annual award is given to 50 employees out of more than 8 000, across all PwC offices in 26 countries in Africa, who personify the PwC values and experience.

‘Although I have obtained the designation CA(SA) (and I am truly grateful for it), I feel there is a lot I would still like to achieve in life,’ says Shaah.

‘I think my ultimate goal is to be recognised as an industry leader and someone who is highly revered in whichever field I decide to pursue. At the same time, I want to make a meaningful contribution to society as a whole, assisting particularly those who are underprivileged.’

Despite the accolades, Shaah remains humble. Asked what he would have told his 12-year-old self, the 24-year-old replies: ‘Don’t write off the dorky girls, they actually turn out quite pretty in the end!’

•            Nothing comes easy. You have to work hard to achieve your goal, but at the same time, it should not be all work and no play. Make time for things you enjoy.

•            Give your best in whatever task you undertake. Those working with you will respect you even more and you yourself will feel proud of the result of your effort.

•            Integrity and work ethics play a big part in your success as well as in your happiness.