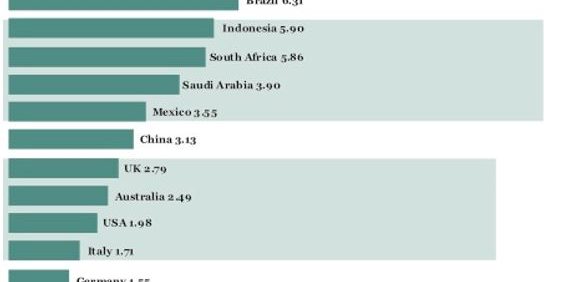 Inflation rates of the G20 countries

These figures show the inflation rates of the BRICS countries (Brazil, Russia, India, China and South Africa) to generally be higher than most. India’s inflation rate is the highest, while Russia’s inflation stood at 7.26% in March 2013 and Brazil’s was 6.31%. China’s rate at 3.13% is at a 10-month high, as holiday season spending and rapid credit growth accelerated price rises.

Indian inflation slowed to an over three-year low. If this deceleration is sustained it may trigger another interest rate cut as growth falters. Historically, from 1969 until 2013, India’s inflation rate averaged 7.74%, reaching an all-time high of 34.68% in September 1974 and a record low of -11.31% in May 1976.