The Budget and Job Creation 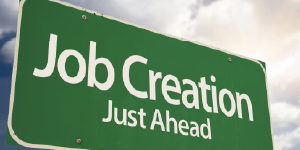 According to the Mail and Guardian, Finance Minister Tito Mboweni said that in the next three-year period, R61,4-billion would be allocated to public employment programmes which are estimated to have created more than four million jobs of varying duration over the past 10 years. Mboweni’s aim is to create a further two million jobs by the end of 2020/21. The clothing and textile competitiveness programme is to receive R600-million and is expected to support 35 500 existing jobs and create 25 000 new jobs over the next three years.