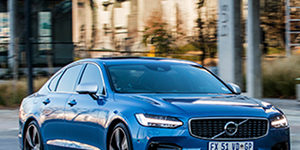 Volvo has always been known to be conservative and subtle in the way their cars just seem to blend into the crowd of other motor vehicles. Well, that was until now …

The all-new S90 will definitely stand out from a crowd especially from the rear, with its now almost Volvo signature-style rear cluster lights. On the S90 they look like brackets on either side of the car, echoing the similarity of the XC 90-style lights. Up front, the elongated headlights that are split halfway with a LED light with a horizontal ending that looks like the letter ‘T’ on its side.

The rather elongated body on the S90 looks longer than many of its competitors, which I think was a strategy on Volvo’s side, as its competitors are trying to make their cars look smaller. Volvo is making their cars appear larger than they are. The coupé-style rear window adds to a larger interior space and gives the car a rather executive finish.

Step inside and you are welcomed by a simple and elegant interior that has a real sense of luxury. This is thanks to the use of high-quality leather, plastics and the light real wood inlays. The traditional squared centre hub of the steering reminds you that this is from the Swedish marquee stable. The big change to previous Volvos is the huge investment in technology: gone are the knobs and buttons and in their place is a large, almost tablet-like screen in the centre dropdown console. This touchscreen infotainment system controls almost everything in the car from climate to sound and the heated seats. The use of the Volvo interface does take some getting used to, as it is deliberately different from any of its competitor’s style. Once you are trained on this, it becomes almost second nature, though.

The space upfront and in the back is ample, and so too are the legroom and the carnivorous boot. The one drawback is that the boot lid feels light and almost tiny compared to the rest of the car, which has a rather solid feel.

The big plus on the Volvo is that almost all the creature comforts and more are standard. Items like heated seats, blind-spot indicators, and electric seats are ll standard − to name a few.

On the road, the Volvo feels soft and comfortable to the point that you realise this car can easily be one that you are chauffeured around in. The steering wheel is light but does lack a bit of responsiveness. The front-wheel-drive system can catch you off guard if you have a load at the back and decide to take off with your foot planted. The motor kicks off, but the tyres battle to get traction causing the car’s traction control to kick in just as the tyres manage to catch the tarmac. This results in a rather jerky take-off. That said, this car is not meant to be a traffic-light racer. It’s rather meant to cruise around in absolute comfort, and that it does achieve well in its stride. Volvo is also known for its safety and that has not been spared in this vehicle.

Overall the S90 has definitely matured to become a worthy competitor to cars like the BMW 5 series, Mercedes E-Class and Audi A6. It is possibly one of the most comfortable and the best standard-equipped of the lot. However, the front wheel drive system is not as smooth as the Audi, but all in all the car feels good and the large centre display reminds one of a Tesla rather to that any of its competitors. This is interesting, considering that Volvo have just announced that they will be going all electric in the not too distant future. So, if you’re looking for a medium-sized sedan and want to stand out, the Volvo is one to consider.

AUTHOR l Torque Talk is a member of SAGMJ