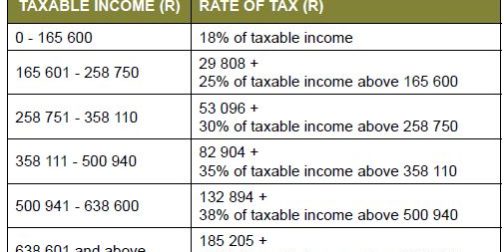 The Budget and new tax law

The budget speech introduced several changes that will have a direct impact on payrolls and Human Resources (HR). Administrators will have to ensure that their payroll systems are updated as from 1 March 2013 to reflect the stipulated changes. “Not implementing these changes, in the first period of the new tax year, will result in incorrect PAYE calculations,” says Karen Schmikl, Legislation Manager at Sage VIP, part of the Sage Group plc.

The tax tables for individuals and special trusts for the year ending 28 February 2014 are:

An employee is entitled to receive a subsistence allowance when the employee is obliged to spend at least one night away from his or her usual place of residence. The value of the deemed allowance or advance where the accommodation is in South Africa has been amended to R319 per day for meals plus incidental costs, and R98 per day for incidental costs only. The schedule of rates for
accommodation outside the country has been published on the SARS website.

The medical tax credits have also been increased to Variable Remuneration. Remuneration should be taxed when it is paid to the employee or when it is accrued (whichever happens first). This principle sometimes causes problems as a payment can be accrued in a tax year but only be quantified and paid in the next tax year. From 1 March 2013, variable remuneration should be taxed in the month that it is paid to the employee and not when it accrues. This is quite a significant change as this will relieve the administrative burden of managing these payments.

Variable remuneration is defined as:
• Overtime
• Bonuses
• Commission
• An allowance or advance paid in respect of transport expenses such as a travel allowance
• Leave paid out R242 for the main member and first dependant and R162 for every additional dependant thereafter.

Travel allowance costs have also been adjusted. The SARS deemed rate per kilometer increased from R3.16 to R3.24. The fixed cost, fuel and maintenance cost values have been amended and it is advisable to recalculate the value of all employee travel allowances from 1 March 2013.

The Retirement Reform may be implemented in March 2014. This will result in fringe benefit calculations when an employer contributes towards employee retirement funds that include pension and retirement annuity funds. A 27.5% deduction is proposed on contributions, with a maximum annual deduction of R350 000. Employers should also take note of the impact of the Taxation Laws Amendment Act, 2012, on payroll systems.

This includes a change in the way employers deal with rental cars as company cars and the taxation of variable remuneration. It is advisable for employers to ensure that these changes are being applied to their payroll systems, to keep their businesses compliant and up-to-date with legislation. ❐