THE WORLD: Global leadership survey: A stark warning for SA 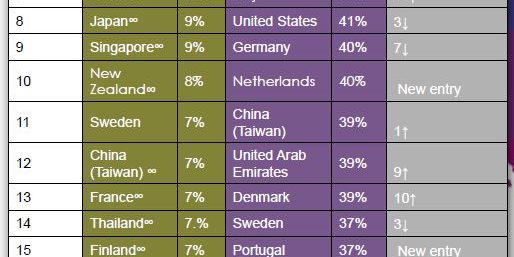 A Global Leadership study, providing a worldwide view of leadership potential has recently been released by SHL. The study identifies the top 25 countries based on the analysis of over a million people from SHL’s global Talent Analytics™ database.

Effective leaders are those individuals with many of the following attributes: the ability to direct, influence, motivate, communicate and work harmoniously at peak performance to achieve an organisation’s goals. This report reveals that Hong Kong, Germany and the UK have more effective leaders today than any other country. South Africa ranks 20th, while Denmark, Brazil and Norway have the lowest supply. “The strength of supply of leadership talent in South Africa is ahead of other BRICS countries (Brazil, Russia, India and China), but leadership levels lag behind developed G8 nations and the global average,”said Eugene Burke, chief science and talent analytics officer at SHL.

The landscape of leadership potential changes significantly when analysing the supply of leadership talent for tomorrow*.
Mexico, Turkey and Egypt have the greatest source of potential future leaders. In stark contrast, South Africa falls out of the top 25 ranked countries, the UK drops 18 places and out of the top 20, while Hong Kong falls from poll position to 20th.
Mexico and Brazil jump 19 and 21 places respectively, with Mexico topping the list.

Burke continued: “As the global landscape changes economically and socially, nations in the newer economies have a huge growth opportunity if they can identify, nurture and develop the leadership potential they have.” Commenting on local leadership challenges, Kim Dowdeswell, SHL South Africa head of science and research, said: “Despite having a strong supply of leaders for today, South Africa has a leadership time bomb on its hands if it doesn’t invest in learning and development programmes to
cultivate its future leaders.”

SHL’s indices also reveal South African women as ranking 14th globally in leadership capability today. Despite the research showing negligible differences in capability between the sexes, the gender divide in leadership positions is vast, with only 28% of leadership roles held by women and just 8% of businesses led by a female CEO. ❐