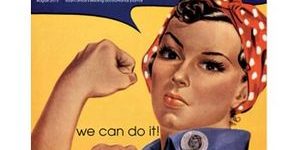 WE CAN DO IT ALL…

Our cover this month is of the iconic World War 11 (WW11) American ‘Rosie the Riveter’, who, according to American history, inspired a social movement that increased the number of working women in America to 20 million in 1944, an increase of 57% from 1940.

Although the image of ‘Rosie the Riveter’ reflected the industrial work of women during this period, the majority of working women during the 1940s filled non-factory positions in every sector of the economy. Women became taxi and streetcar drivers, operated heavy construction machinery, worked in lumber and steel mills, unloaded freight, built dirigibles, made munitions and much more. And what unified the experiences of these women was that they proved to themselves, and whomever else watching across the globe, that they could do a ‘man’s job’ and that they could do it well, albeit that they were paid less than their male counterparts.

The American slogan at the time, ‘Do the job he left behind’, said a lot about the propaganda that still largely persists today. Women could do the job as long as he didn’t want it or wasn’t around to do it. So as soon as soldiers began to return home after the war, women were forced out of their new jobs.

The situation was slightly different in SA though, as the pattern of female employment had already began to change in the early 1920s. So, by the 1940s, during the war, when the cost of living soared and economic hardship increased, and women struggled to feed their families, they took on a variety of informal jobs in order to survive. But they also started paying much more attention to their political rights, which, in our history, are also closely linked to trade union activities.

But, despite this history, women in positions of change and leadership was not a new phenomenon in the early and mid 1900s. In fact, history teaches us that Egyptian Queens have ruled countries and economies from as early as 2500BC. But, of course, the impact of women on the labour market, as we know it today, wasn’t really felt until after the second world war.

And 70 years on, the situation has not changed that drastically. We’re still find it amazing to see women in leadership roles, we still gasp at women running governments, or listed companies, and we’re still shocked when women, at CEO level, still earn marginally less than the majority of their male counterparts. And all this despite the fact that we’ve shown society and, in particular, men that we can do it all. Balance being a wife, mother and corporate leader with aplomb!

The case studies exist, and in our two special reports this month, we introduce you to strong, focused, successful women in industry, who most certainly can do it all…husbands, babies, cooking, and corporate reshuffling!

And if you think that the situation for women, particularly in this country, isn’t that bad, take a look at the statistics issued by the Business Women’s Association South African Women in Leadership Census 2010, whose findings assert that, despite their majority, women remain under-represented in the formal economy.

The Employment Equity Commission’s (EEC) 2007/08 and 2008/09 findings reveal that women are more represented in administrative as opposed to decision-making functions. Despite the fact that the majority of women directors are black, these directorships in the main are in state-owned enterprises (SOEs) – JSE-listed companies are lagging seriously behind. SOE women hold 40% of directorships, as opposed to the 16.6% in JSE-listed companies. One-third of SOE chairpersons are women, as opposed to the 6% women chairpersons of companies.