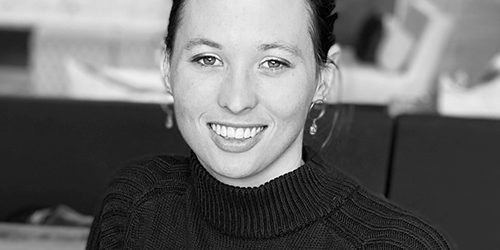 An empty boardroom with four phones placed on the floor. That’s what Sarah Cromhout found when she started her first day of work for the Small Projects Foundation, an Eastern Cape NGO. Nothing could have been more different from the past four months she had spent working for PwC in Minneapolis. ‘Working for an NGO makes you aware of the vast access to resources you have in corporate – and how often you take them for granted,’ she muses.

Sarah’s US stint had been cut short by the COVID-10 pandemic, with her employers deciding it was best for foreign workers to return to their home countries. It was a decision that certainly made sense – but one which left Sarah with some big question marks over her immediate future.

One thing she knew for sure, though, was that a career in audit wasn’t for her. She was far more attracted to the idea of getting involved in community work; probably because she had been working on outreach projects since her high school days. Plus, although she’s aware of the importance of good governance, she’s more motivated when she can add value to an organisation in a way that has more tangible outcomes. In fact, that’s one of the reasons why she studied towards a CA qualification in the first place: she knew the skills she acquired would open doors around the world, making it possible to focus on any sphere she chose.

That’s why when the Small Projects Foundation invited her to set up a call centre that would negate the need to pay beneficiaries face to face visits, she leapt at the opportunity – her lack of experience in this area notwithstanding. ‘I’ve always enjoyed a good challenge, plus I thought I would be able to learn as I went along,’ she explains.

She was also incentivised by the benefits the project would bring about. Before the pandemic, the Small Projects Foundation maintained contact with its beneficiaries – predominantly orphans and vulnerable children in Buffalo City and Amatola – with face to face visits. This was no longer a safe option once the pandemic set in; moreover, once lockdowns were implemented, it was no longer possible for social workers to touch base with programme participants at their homes, schools or clinics.

Sarah admits that the first three months working on the project were ‘intense’. Since this was a new arm being added to an existing programme, her tasks primarily involved staffing the call centre: recruiting social workers who would be able to provide the necessary counselling and services over the phone. She also worked closely with a developer to create the technology platform that would make it possible to migrate all processes online. This was an important step, because previously all administrative work was completed manually; for example, beneficiaries would have to travel for hours to obtain a form, fill it in and hand it in if they wanted to join the programme.

Sarah also set up a rapid response team for GBV victims. ‘There is a terribly high rate of gender-based violence in the Eastern Cape, and this increased once lockdown was imposed,; she notes. Working with highly experienced nurses and, where necessary, police, members of the team were on call 24 hours a day, travelling to areas where victims had reported incidents. Although the work was extremely rewarding, seeing the amount of violence inflicted on South Africa’s women and children took its toll on all who worked on the team, so Sarah partnered with another local NGO to provide support for all involved. Thus, the project wasn’t simply about helping beneficiaries, but also protecting the foundation’s employees as far as possible, Sarah explains.

All of these activities entailed a very steep learning curve, and Sarah’s team encountered many challenges along the way. Some of them were entirely unanticipated: for instance, it wasn’t uncommon for beneficiaries to change their cell phone numbers simply because another provider had offered a better tariff. This made it very difficult for the NGO to maintain contact with them.

Whenever she encountered such obstacles, Sarah was buoyed by the passion of her team. ‘It was incredibly humbling and inspiring to work with these people. They gave their all to their jobs, and because of that, they were able to make a big difference.’
They also taught her some vital lessons – chief of which was that every member on a team has something to add and should be allowed to have a voice. This was all the more important given the diverse backgrounds of team members, which meant that each was able to contribute unique and interesting insights.

Sarah says that the skills she learnt during her articles proved a great help as she tried to find ways around stumbling blocks. ‘I think that one of the greatest benefits of our training is that when you’re given a brief, you don’t necessarily know how to solve the problem all at once. You learn how to prioritise tasks and break things down into smaller tasks so that you have a framework for problem-solving,’ she points out.

Nine months after setting up the call centre, Sarah embarked on her next adventure: joining the Climate Change and Sustainability Services Division at EY − a position that thrills her because of the opportunity it affords for guiding other organisations along their sustainability journey.

She still checks in with her team at the Small Projects Foundation, though, and will remember forever the joy she derived from empowering her team to help others.

One of the most surprising aspects of working for an NGO, says Sarah, was how visible the impact of technology and innovation becomes when you’re working with scarce resources. ‘It may sound obvious, but tech can really affect costs. The introduction of automated processes in our call centre was a case in point. Once staff didn’t have to spend money on transport to distribute forms to be filled in, there were more funds to spend on resources that could make a material difference, like sanitary pads,’ she says.