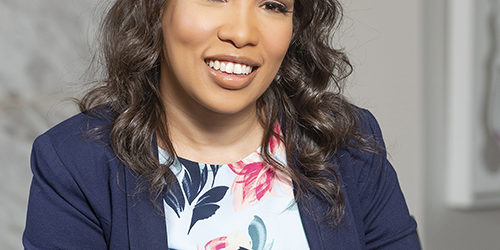 Robyn Vilakazi first learnt about the chartered accountancy profession in high school because of her strong maths and accounting skills. ‘I come from a working-class background, and I had no prior exposure to careers in finance. People said you can do this, and you will earn good money, and I liked the sound of that. Job security was also mentioned and that was an important factor too.’

She says that studying at the University of Cape Town (UCT) changed her life. ‘I stayed in res, and I was immediately taken out of my sheltered home environment. I started meeting people from all walks of life, and whom I had never been exposed to while growing up. My view of the world suddenly expanded. I built relationships with people from different places and diverse backgrounds. It was then that I decided I would move to Johannesburg.’

At Wits University she completed an academic articleship which offers trainee accountants the opportunity to spend their first traineeship year in a stimulating academic environment where they are part of the teaching staff.

After that, she completed the remaining two years of articles at EY. In 2013, having qualified, she applied for a role in the firm’s technical division where she wanted to continue with the more academic aspects of the profession.

‘During an interview one of the partners told me the job was mine but that she wanted to meet the public sector team first because it was clear that I was a problem-solver who liked to fix things. That was my entry into the public sphere, and I have not looked back.’

That first role was technical, and she was tasked with consulting and assisting with a range of matters, in the areas of financial reporting, financial management and compliance, supporting clients in the national and provincial spheres of government.

In this role, there were several instances where Vilakazi succeeded in enabling several public sector clients to achieve an audit turnaround. ‘It was satisfying to help a client improve their audit outcomes and maintain improved audit outcomes even after we left, because the changes our team implemented were structural and not temporary. Good audit outcomes are vital for the sound and effective functioning of government and to ensure that public funds are being used for the benefit of our citizens.’
She progressed through the ranks at EY and became a manager. In 2017, she left the firm to join the Energy & Water Sector Education Training Authority (EWSETA). Her first role was that of financial manager. In 2019 she returned to EY as a senior manager and then left to re-join EWSETA, which is where she is now the CFO.

Ask her why she left and why she came back, and she says it’s about different experiences. ‘I only ever left a position because of the opportunity for learning,’ she says. ‘There are initial periods of rapid change, adaptation and learning, but then that plateaus and it’s important to find new ways to grow. At that stage in my career, I liked continuous exposure to new things.’

At present, she is accountable for all financial aspects and management of EWSETA’s business as well as ensuring compliance. She says that she is drawn to the public sector precisely because of the opportunity for continuous learning.

‘The energy and water sectors are extremely interesting and the problems you have to deal with are complex,’ she says. ‘In the private sector you make decisions based on what is going to sell; in the public sector there are social, economic and legacy issues that have to be addressed, and this ensures that my job is always interesting. There are no quick fixes or clear solutions, so you are always reading and researching. Even when you think you have reached a solution, you may find that it will have an impact on the next generation of children, for example, so you have to go back to the drawing board. It’s a position that comes with a level of power, but also with much responsibility, which is a fascinating mix.’

Resilience is key to thriving in the public sector, she adds. You have autonomy, but you are also required to be accountable. Because you are accountable to so many different stakeholders – and they hold you to account – you have to be able to roll with the punches, wake up the next day and try again.

‘Innovative and creative thinking are essential, even though this might be difficult for people to believe,’ Vilakazi says. ‘There are many limitations in the sector. For example, if you have a morale issue in a private company, you can take R100 000 and go on a teambuilding exercise or have a great year-end function. The idea of investing in and rewarding your people needs to be very carefully weighed up against the wise use of taxpayers’ money in our sector, which means that creative problem solving is vital. You really have to apply yourself and I think that is why it’s not for everyone, but for people who like that challenge it is exciting and ultimately rewarding.’

Under lockdown, she says, she learnt to appreciate things as never before. ‘I did not know how much it meant to me to get out of town every now and then for a weekend in nature, or to spend time with friends or family. I am quite an introvert by nature, and I enjoy my own home and my own company, but lack of freedom was a challenge for me.’

Like many people, it was also a struggle for her to find the balance between work and home life. Managing working hours was difficult. ‘As a result, my mental health took a knock. Although at first, I really leaned into the work-from-home move, thinking I would save so much time, but it eventually became damaging to be so extremely productive. The pace and intensity were overwhelming.’

Vilakazi is thankful that her relationships with colleagues were already well established, and she was able to deal with onboarding new employees. Interacting virtually was convenient and helpful, and she even made new friends with people she had not met in real life. She’s now back at the office several days a week to reacclimatise to the environment and the people.

She’s currently working towards her MBA at the Gordon Institute of Business Science and will complete it at the end of the year. She is enjoying the research as well as the work she is doing on strategy development.

‘In the public sector, when you take an executive role, to be effective and impactful you have to commit to it for a reasonable period. I’ve agreed to at least five years. Anything I set out to do will take time and I am prepared to see it through.’

Financial executives are too often excluded from strategic decision-making and are not perceived by other executives as strategic partners. Vilakazi is determined to evolve her role from one that is still largely operational. ‘My aim is to turn finance into a strategic partner of the organisation, one that supports and challenges the “business” and ensures that the strategic path chosen will create the desired value we are seeking to deliver.’

Although she has not been in her current position for long, she has already succeeded in being a cultural change agent. Driving cultural transformation has led to a higher degree of connectivity between the finance function and the rest of the organisation, with greater mutual understanding and respect. ‘The public sector is known for being a place where people get a job for life; they become comfortable with the way things are and mediocrity settles in,’ she says. ‘I have been working to change that mindset and it has had a positive impact. People in my team have been grateful for my help in solving micro problems in ways they may not have been aware of previously. It’s rewarding to see how employees react to a different perspective on ways of doing things.’