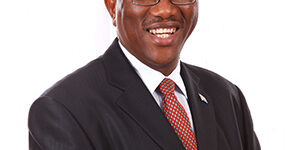 Throughout his life, Kimi Makwetu CA(SA) was an unforgettable leader, a public servant who refused to stay silent in the face of corruption.

As Auditor-General of South Africa (AGSA), he worked tirelessly for 13 years – first as deputy auditor-general — to cultivate a culture of integrity and accountability; reinforce transparency and good governance; empower both staff and citizens and advance ethical leadership and value-added activities.

According to reports, Kimi was born and bred in Gugulethu township in Cape Town and raised by hardworking, politically conscious parents. He credited his mother, Maureen Makwetu, an entrepreneur who hawked meat, for his lifelong interest in finance.

He began his career at Standard Bank, after which he worked at Nampak. He completed his articles at Deloitte before joining Liberty and Metropolitan Life. Before he joined the AG’s office, Kimi was a director in Deloitte’s forensic unit.

It is for his lifetime of unwavering and ethical service to the citizens of South Africa that Kimi was honoured and recognised by SAICA’s special chairman award – the Leader in Public Accountability Award.

Not even battling stage four lung cancer for two years could keep Kimi from fulfilling his duties with rigour and diligence.

In his last two weeks in office, Kimi was busy finalising reports, including a comprehensive Covid-19 corruption report, when he passed away. After his death, Kimi was honoured for his service to the people of South Africa, for serving the country with dignity during difficult times and for being an ambassador for good governance.

Kimi was never one to shy away from the truth when it came to his role as custodian of public funds and year after year his reports contained shocking findings of fruitless, wasteful and irregular expenditure on all levels of the state.

In September of 2020, he gave an account of how a bad situation was made worse in public finance when he detailed how R147.4 billion was misappropriated from the emergency budget during the Covid-19 pandemic.

He described his office’s findings as “frightening” as he detailed how public funds were abused from April to July 2020.

“A lot of the effort that we put into this on the detection side of things has revealed several frightening findings that require to be followed up very quickly so that there is no significant passage of time before the required actions are implemented,” Makwetu said at the time.

Despite everything he discovered, Kimi was always astutely professional and optimistic. His legacy and the groundwork he has done will be felt in years to come. He fully embodied the meaning of his middle name, Thembekile – “the one who can be trusted”. He was a leading light in the AG’s office and a champion of public accountability.

Finding the issues was not where he felt his mandate ended. He wanted to create systems that would prevent the misuse of public funds.

Kimi advocated for the Public Audit Amendment Act which gives the auditor-general the power to refer irregularities for further investigation and to launch a process to recover lost funds. The law was adopted in 2018.

Kimi believed in the importance of strong leadership and in empowering others by creating a work environment that values transparency and discipline. He personified integrity, diligence, selflessness and humility. Under his leadership, the stature and reputation of the AG’s office grew.

“Kimi was a great public servant – a real living example of what it means to serve the public interest,” remembers Prof Wiseman Nkuhlu. “He dared to stand for his convictions, for good ethics and made sure the office that he led had the competencies to fulfil its mandate. He always put the interests of the people above his own.” Prof Wiseman believes Kimi was a great role model for what it means to be a public servant. “He was a great South African and we are very proud of him.”

Kimi is survived by his wife and three kids.