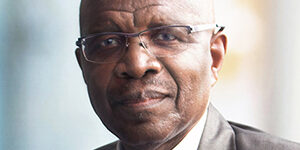 The legacy award honours those who have built a legacy that will live on for many generations. Their legacy inspires others to dream more, learn more, do more, and become more. Their stories will be remembered for decades, etched into the minds of hearts of others.

As the first black chartered accountant, Prof Wiseman Nkuhlu CA(SA) was a pioneer in the profession and during his over 40 years in the profession, he has played key roles in academia, philanthropy, development, business and politics.

From being a political prisoner on Robben Island at the age of nineteen to being the economic adviser to President Thabo Mbeki, he has been a leading light in inculcating a corporate culture of

accountability, ethical business leadership and the advancement and development of South Africa.

Prof Wiseman currently holds various positions including chairman of KPMG’s board, chancellor of the University of Pretoria and is a member of the Advisory board of SAICA. He served as president of SAICA for two terms (from April 1998 to April 2000) and is passionately involved with the development of black accountants. He is also the Patron of the Nkuhlu School of Accounting at the University of Fort Hare.

Prof Wiseman has always had immense pride in the auditing profession. Therefore, it came as a great disappointment to him when the profession was plunged into unprecedented crises when KPMG South Africa came under the corruption spotlight and was regarded as an enabler of some of the state capture activities of the Gupta family.

This is why Prof Wiseman took on the role of chairman of KPMG South Africa – to help rectify what had unfolded for this 100-year old prestigious firm to become embroiled in state capture and corruption.

During his illustrious career, Prof Wiseman served as an economic advisor to President Thabo Mbeki and as chief executive of the Secretariat of New Partnership for Africa’s Development NEPAD from 2000 to 2005. He played a major role in the elaboration of the NEPAD policy framework and in promoting the programme both in Africa and internationally. He participates regularly as a speaker in international conferences on African Development issues and corporate governance.

In recognition of his contribution to education, business and development, Professor Wiseman has received several awards, including honorary doctorates from the Universities of the Free State, Stellenbosch, Cape Town, Pretoria, Nelson Mandela Metropolitan University, Witwatersrand and University of Fort Hare; and merit awards from the National African Federated Chamber of Commerce, Association for Advancement of Black Accountants of Southern Africa and the Black Management Forum. He was also awarded the President of Convocation Medal by the University of Cape Town in June 2004. The medal is awarded to graduates of UCT for outstanding community service.

However, receiving the Legacy award was completely unexpected. “When they called my name, I had a moment of dizziness and I experienced something like an electric shock through my body,” he explains. “I was worried that I was going to collapse, but fortunately my wife was there to hold my hand,” he smiles. “You do your work, like everybody else, so when you get this type of recognition, it’s very humbling and not something you take for granted.”

The thing Prof Wiseman is most proud of is having a positive impact on others. “The most special thing was, after qualifying, when I started my small office in Umtata and taking article clerks, there was suddenly an amazing interest by African students – highly gifted people, including Nonkululeko Gobodo, the first black female Chartered Accountant, — in the area to study accounting,” he says.

Another rewarding highlight for him was becoming SAICA’s president in 1998. “I had the opportunity to influence the direction of the profession, including the appointment of Ignatius Sehoole and the establishment of Thuthuka.”

Prof Wiseman says “throughout my career I’ve tried to make a contribution in development, in education and in the profession. But I feel I should have been a stronger advocate for improving the quality and relevance of South African education sooner.”

He believes all the challenges South Africa faces can be solved by quality and relevant education. “That will give our people the capabilities that are relevant to the world of today and the fourth industrial revolution.”

For Prof Wiseman, his work is not yet done. He would like to have a positive impact on, is the erosion of public trust in the profession. “I want to be involved in improving the effectiveness of the guardians of governance. Our boards of directors, audit committees and CEOs need to be stronger and more effective. We need to find a way of enhancing the resilience of all the links in the chain of governance to be stronger in resisting and preventing corruption.”

“Accounting is a great profession – one with a sound foundation in terms of technical knowledge, but also as an anchor for all values and ethics, especially in terms of the public interest, driven not only by self-enrichment but also to make a positive contribution to the good of others,” he concludes.