COVER STORY: A WEALTH OF OPPORTUNITY 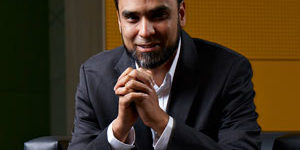 If anyone needed proof of the mobility that a CA(SA) qualification offers, they have to look no further than Nazeer Wadee, acting group chief financial officer of pay TV giant MultiChoice. By Monique Verduyn

In demand almost from the moment he qualified, Nazeer Wadee has had the satisfaction of providing essential strategic guidance and consulting for government, education and the corporate world over the past 18 years. In his current role, he is a business advisor who makes strategic decisions aimed at driving business, improving profit margins and increasing market share for the MultiChoice group.

Wadee grew up in Lenasia, in what he calls an insular community. ‘We generally had two choices after school – either study medicine, or become a CA(SA). I applied for both and fortuitously chose the accounting route,’ he says.

He completed his articles at Coopers & Lybrand, now PricewaterhouseCoopers, while doing his honours part-time at Wits. That meant working a full day and then attending lectures at night. ‘Qualifying as a CA(SA) is really about application,’ Wadee says. ‘Accounting is not the most complex subject, but it’s voluminous, and you have to pace yourself correctly.’

A year after completing his articles, the auditing world had lost its shine and he was ready for a new challenge. ‘I had learnt a lot about structures and processes, and how to organise my thinking, which is the great benefit of doing articles with an auditing firm. But by the end of the fourth year my job had become routine and it was time for a change.’

AN EARLY STINT IN IT

That change came in the form of a technology company which was part of Denel. Two weeks after Wadee joined as a reporting manager, it became arivia.kom, which was one of government’s first attempts at privatisation. The business was restructured and needed a new group financial manager. He was in the right place at the right time and he got the job.

‘From being an articled clerk with no experience, I was in charge of finance. I took it on because I believe in going with the flow, and not overanalysing the choices that life throws at you. Life had presented me with an amazing opportunity in a new business and I went for it.’

Wadee spent five years at arivia.kom, gaining experience in strategy development and implementation, business improvement and process improvement. In his final year there he formed a management consulting business within the organisation and became CEO of that business, which gave him a new set of consulting skills.

MAKING A MARK ON LEGISLATION AND REGULATION

In 2005, he met Chantyl Mulder CA(SA), Executive Director of Nation Building at SAICA. Mulder then headed up Education and Training and was instrumental in setting up the Thuthuka Education Upliftment Fund in 2002, to help transform the chartered accountancy profession.

Wadee interviewed for the job of CFO at SAICA and his career took an entirely new turn as he entered the non-profit world. ‘SAICA does great work through Thuthuka and it was a wonderful experience to be part of an initiative that seeks out students with potential who would otherwise never have the opportunity to study, and then helps them to become qualified young professionals.’

It was at SAICA that he also spent time working with teams on accounting practices and standards, and with government on legislation. Of the most significant pieces of legislation the team were involved in during his tenure was the new Companies Act of 2008.

‘To see the impact we had and the tangible difference our contribution made to this and other pieces of legislation, in making it more user-friendly for companies, was extremely rewarding. First drafts of proposed new legislation are often theoretical, difficult to decipher, and really difficult to implement. We played a major role in making it easier for companies to do business by helping making the Act less complex.’

Other projects included the development of accounting standards for small and medium-sized entities (SMEs) in South Africa, which was a big win for SAICA’s standards team, as well as the work done with the South African Revenue Service (SARS) on the rollout of e-filing at the time.

THE MOVE TO TELEVISION

After six years at SAICA, Wadee knew that if he did not move on he would remain in the NGO sector for life. Out of the blue, he met with the CEO of the MultiChoice South Africa group. After several meetings with senior executives at MultiChoice, Wadee was appointed CFO of SuperSport. The appeal of the business for a sports fan like him was enormous, to say nothing of the chance to work in a big commercial organisation like MultiChoice, with all its different interests.

‘SuperSport’s business is to buy local and global sports rights, to produce quality programming from the events that are secured at the lowest cost possible, and to package its offerings to drive new viewership and hold onto existing viewers,’ he explains. ‘My focus was on working with the CEO to help to secure many of those rights. It’s an extremely competitive business, especially as you move up north into the rest of Africa. There are many players, with lots of money, always hoping to outbid you. You have to negotiate cleverly to procure content at prices that make sense for the business.’

As a CA(SA), he also devoted his time to supporting the business strategy by improving internal processes, streamlining the business and cutting costs. Ensuring compliance is critical in the broadcasting business, which is highly regulated by many government departments, and the burden of legislation only becomes heavier as companies move into the continent. What excited him in addition was the opportunity to sit on the boards of some of the biggest rugby and cricket franchises in the country. Introducing his six-year-old son to Victor Matfield was a great highlight for his little boy. Within 18 months, however, Wadee was promoted to CFO of  MultiChoice South Africa. A mere ten months later, he was promoted to group CFO for the South Africa group and is currently acting segment head for finance across the continent, which comes with a whole new set of challenges.

‘I’ve spent an average of five to six years at each organisation I’ve been employed by, but I’ve been fortunate enough to move around a lot within these structures. My role at MultiChoice has given me exposure to the world of pay TV and all its moving parts. It’s a business that I love.’

As a large pay TV provider in South Africa and the continent, MultiChoice buys content from abroad, and has a substantial local content production business too.

‘There are many challenges,’ says Wadee. ‘Subscribers complain about repeats on DStv, and they complain about the price. The reality is that we screen 99% of blockbuster movies released each year, and you cannot ask for more than that. Also, we pay for the content in dollars, which means the exchange rate has a massive impact on our offering. Despite that, we have succeeded in keeping costs low and our customers can be assured that our pricing is well within global norms.’

One of the major logistics challenges in MultiChoice’s business is collecting payment from millions of customers in South Africa alone. It’s a simple enough process when people pay by debit order, but there are many customers who pay at retail stores, online, and through banks.

‘Once we receive the money, it has to be allocated correctly, and the customer must have a picture on their screen in minutes. If that does not happen, complaints arise and the call centre is placed under pressure, which ultimately impacts customer service. Many things can go wrong, and there are multiple internal and external factors to manage – like the weather and its effect on our satellites.’

MultiChoice also has a multitude of regulations and legislation that it must comply with. There are similarities between Southern African countries, but the further north you go, the more dissimilar things are. The type of content also has to be tailored to  the audience. Generally, audiences prefer to see their own lives and stories portrayed on the screen. That has led MultiChoice Africa to set up studios in Kenya and Nigeria to produce local content, and to source much of its Africa programming from producers in the countries it operates in.

‘One of the most startling differences is that countries like Nigeria, Uganda and Kenya are cash economies,’ he adds. ‘In Kampala, for instance, hundreds of survivalist entrepreneurs line the streets, many of them selling similar products. Their earnings are erratic, which means that one month they pay for their DStv subscription, but the next month they can’t. That has an impact on a business like ours, which is dependent on having a paying customer for the whole year. As a result, we have had to continually modify our business model in these regions and seek to establish new ways to accept payments, such as incentivising shop owners who collect subscriptions. It’s a completely other way of doing business, and it is fascinating.’

With competition a burgeoning issue, whether it’s from YouTube or the many telecoms providers on the continent, there is space for much innovation in television. Recently, Naspers launched ShowMax as an alternative for consumers looking to stream great content over the internet.

Challenges aside, or perhaps because of them, Wadee is an enthusiastic fan of the entertainment industry and has found a professional home that keeps him motivated and inspired. With the right approach, he says, CAs(SA) have the insight to pick up process issues, to identify opportunities for costs saving, to spot strategic gaps, and to seek out new products and business opportunities. That’s why those who find themselves in the right type of organisation have access to many different and rewarding opportunities for growth.

‘It’s amazing to see where a CA(SA) qualification can take you,’ he says. ‘I believe that going through the process of being an articled clerk prepares you for the world of work in a way that few other experiences can, because of the exposure to so many areas of business. The qualification buys you a ticket to the dance floor. If you can show you have the right moves, you can quickly get to star in the show.’

He maintains that the South African market is an attractive one, filled with opportunities for people ready to seize them. ‘We have a multitude of big corporations, with new ones often entering the market. For young CAs(SA), the country provides excellent grounding and means to gain valuable experience. I encourage newly qualified people to find way of advancing their careers while also contributing to society. This country needs bright, energetic professional young people, including doctors, lawyers and engineers, to help grow what is essentially a baby in global terms,’ he says.

‘Some CAs(SA) may choose to be auditors or work in tax, but there are also many exciting career options available for those who are seeking different cultures. The best move I made was to go where the vibe and culture felt just right.’