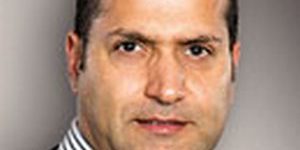 Nazeer Essop, the public sector leader for Deloitte Southern Africa and an audit partner, believes in the power of education to transform lives, families and communities. Monique Verduyn spoke to him.

When Nazeer Essop told his parents and his extended family that he wanted to become a chartered accountant, their immediate response was, “Why would you want to work for a boss?”

Essop, born and raised in Laudium, south-west of Pretoria, comes from a family of entrepreneurs, but the idea of choosing a profession as a career appealed to him from an early age.

“I’d always done well in maths, accounting and economics,” he says. “It was a natural choice for me to study BCom Accounting at Wits University once I completed high school. I wanted the flexibility to be able to work in a variety of different industries, but it was also a path that I believed would be exciting and challenging.”

He began his articles at a small firm in Pretoria where he did box audits, preparation of general ledgers and trial balances.

Six month into his articles he wanted to explore something different and more challenging. Not one to wait for opportunity to come knocking, he applied to Deloitte South Africa in late 1996 and – thanks to an impressive academic record – managed to secure an interview with the then Head of Audit and current COO of Deloitte South Africa.

Recognising the significance of the opportunity, Essop joined Deloitte in 2007. There he had to face the dual challenge of combining employment with his studies as he was studying towards his Certificate in the Theory of Accounting (CTA). He also had to start his articles afresh as Deloitte’s standards were more exacting.

“Serving articles and studying CTA at the same time posed a significant challenge in my life but I would like to emphasise that it is attainable. By dedicating an hour every night after work, as well as allocating an additional three hours of studying time from 6.00 am to 9.00 am every weekend, helped me to pass CTA. This was an approach that worked extremely well for me as I never fell behind and I also had time to socialise with friends and family. This process has taught me all about work–life balance. I still manage to maintain this philosophy in my career as well as in my personal life. Especially now, being a father to three young children, it has proven to be invaluable.”

Essop describes himself as a person who likes to simplify, making things easy and manageable. His fundamental approach being that nothing is too complicated and everything is possible.

“It’s a belief that I initiated in my first year of high school, “he says. “I was in Standard 6 when I launched my own business, buying items like bags on consignment and selling them to family, friends and people in the community. I saved up enough money to buy my first car at the age of 14. I then started buying cars, fixing them up and selling them with the help of my father. At the same time, I bought a minibus taxi, again with the help of my father who had his own taxi business. That is how I paid my university fees. By the time I started working at Deloitte as a trainee accountant I had my own car, fully paid off, just from learning to buy and sell.”

It’s no surprise that full-time eight-to-five employment in a large corporate was a huge adjustment for a young man who had grown up as an entrepreneur, but he was determined to see himself as a flexible and agile individual who could adapt to any situation.

“It’s important to have goals in mind and to focus on future growth if you want to make progress and achieve your dreams. When things were difficult, I remembered what my aspirations and ambitions were and honed in on those.”

RECOGNISING THE POWER OF NETWORKS

After three months at the firm, Essop approached one of the senior partners and asked him how he could become a partner. He was told it would take at least ten years to achieve this goal. He managed it in seven, becoming a partner in 2004, proving that it is possible to achieve anything if you set your mind to it. Today he sits on the Deloitte board, is the public sector leader for Deloitte South Africa, and is also the key liaison partner for the Auditor-General.

“One of the most important factors that contributed to the growth of my career was the way I approached my articles,” he says. “Auditing is not only about doing actual audits – it’s about taking the opportunity to really understand your client’s business intimately. I used my articles as an avenue to get to know my clients’ business intimately, understand how they operate and learn what enables them to be successful. That meant I was able to make the most of my articles, which can be a tedious period if you let it. Instead, I was excited about learning and I took everything I could out of the process. It’s an approach I recommend to young people – always make the most of what an employer has to give you; don’t focus simply on what you have to offer. It’s a relationship that should work both ways. Take your three years of articles and maximise them to develop relationships with people, learn about your clients and build strong and extensive networks.”

It was this approach that led to Essop to achieve partner status in record time. Deloitte employs more than 3 000 people. By the time he had completed his articles, he knew most of those people, as well as the products and services that the firm had to offer.

“To make partner, you have to build your network,” he advises. “You may be a clerk, but don’t let that stop you from knocking on the CEO’s door and saying hello. That level of confidence can only stand you in good stead in a competitive job market.”

DEVELOPING THE CHARACTERISTICS OF A PARTNER

When Essop decided that he wanted to be a partner, he set out to determine exactly what the duties and responsibilities of a partner were. Essentially, they manage risk, look after clients, manage people and win business.

“When I started working with the partner in charge of the Auditor-General’s account, I set out to do these four things, primarily through developing relationships, and I succeeded in growing that account by between R3 million and R4 million per year as an audit manager. Winning that extra business was a direct result of growing my networks and becoming a trusted advisor. I never said ‘no’. ”

As an example, the Auditor-General’s office called him one Friday morning and told him they needed 20 trainees to start work in Bloemfontein on Monday. He found the people, trained them to do the job on Saturday, and sent them off to the Free State on Sunday, ready to start work on the Monday.

OPTING FOR THE PUBLIC SECTOR

Ask Essop why he chose to go into public sector, and he’ll tell you that he is determined to make a difference in the lives of fellow citizens and improving the country. “Working in the public sector gives you the opportunity to impact the lives of 50 million people through departments like education and health, as well as local municipalities, which makes the potential of this industry enormous.”

He and his public sector leadership team have linked these value propositions to the goals of Vision 2030 as set out by government in the National Development Plan (NDP). The aim, among others, is to eliminate poverty and create 11 million jobs by the year 2030. Government has already embarked on a process to align its long-term strategy to these plans, identifying where policy change is necessary for this alignment.

Highlighting some of the key issues facing the South African public sector at present, Essop points to the lack of adequate financial management, lack of effective procurement processes and a lack of accountability which resulted in R11,6 billion in irregular expenditure in 2012–2013 and just 9% of municipalities achieving clean audits.

“The audit outcomes point to lack of skills, talent and effective service delivery at municipal level, which is where we believe we can assist,” he says.

In a recent joint venture with the South African Institute of Chartered Accountants (SAICA), Deloitte trained 1 200 municipal workers, 300 of whom were previously unemployed graduates, in financial management across a total of 172 municipalities.

“The aim was to upskill them in service delivery and the core functions of their jobs. We are determined to do more of these types of projects. The only way to transform the municipalities sustainably is to provide training and development and employ skilled resources to help professionalise the public sector.”

It’s to be expected that Essop has an unshakeable belief in the power of education to transform people’s lives. “When you educate someone, the result has a broad impact on that individual’s family and community, leading to a better quality of life for many people and enabling that individual to contribute to society in a way that would not be possible otherwise. Education helps to move families out of poverty and not just individuals. This is why education is my team’s number one priority.”

“The initial two-year programme resulted in a reduction of the span of control between managers and trainees and additional staff being retained due to improved work life balance and skills transfer. These are the types of initiatives that can have a hugely positive impact on the development of a more effective and efficient public sector.”

Another area of concern for Essop is the financial reporting frameworks/standards for different public entities, departments and local municipalities. “There are some instances where the reporting frameworks are more complex than they should be, placing an unnecessary burden on the entities in question. There is no need to have a Rolls-Royce when a Toyota will do. This is just one of the areas where we are able to assist in creating the most appropriate financial reporting standard.”

Essop cautions that public sector work is not for everyone, emphasising that it’s critical to be passionate about social development if you choose this path. Sincerity and honesty have served him well. He refers to the three “Ps” in the public sector: Passionate, Positive and Patient.

“This is not an easy area to work in, but if your approach is ethical and you are genuinely committed, it can be extremely rewarding and fulfilling. I’m driven by the dream that, one day, patients in public hospitals will receive the same standard of care that those in private hospitals expect and that children in public schools will experience the same or a better quality of education than that in private schools.” ❐