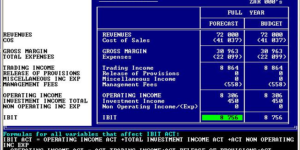 No, not really, although one would think that some IT people might think it would have been a good idea … For obvious reasons, one being that accountants are often depicted as little spectacled men in grey suits, not capable of maintaining a conversation about issues outside their field ‒ but thinking in numbers!

The fact that an idea that originated in 1978, of spreadsheets utilising A1 notation in formulas, is still generally accepted as the norm in financial modelling by millions of accounting professionals is not helping either.

VisiCalc started it all

VisiCalc (short for ‘visible calculator’) was the first spreadsheet software for personal computers and was originally released for the Apple II by VisiCorp. Many consider it the application that turned the microcomputer from a hobby for computer enthusiasts into a serious business tool, prompting IBM to introduce the IBM PC two years later.

In its 1980 review, BYTE wrote ‘The most exciting and influential piece of software that has been written for any microcomputer application is VisiCalc.’

Several competitors appeared in the market, notably SuperCalc and Multiplan, each of which added more features and corrected deficiencies in VisiCalc, but could not overcome its market dominance. A more dramatic change occurred with the 1983 launch of Lotus Development Corporation’s Lotus 1-2-3, written by a former VisiCalc employee.[1]

Javelin Software Corporation (1984‒1988) was a company in Cambridge, Massachusetts, which developed an innovative modelling and data analysis product, also called Javelin, and later, Javelin Plus.

Seen as the successor technology to spreadsheet software in reviews of the time, and rival to the then-dominant Lotus 1-2-3, Javelin won numerous industry awards, including besting Microsoft’s new market entry Excel for the InfoWorld Software Product of the Year award. Others included Best of 1985 for technical excellence from PC Magazine; Most Significant Product from PC Week; and Software Product of the Year. The Infoworld award apparently created some consternation in the top ranks of number two, Microsoft:  ‘At the InfoWorld dinner at Comdex, when they gave out the award for Product of the Year and Excel came in second, Bill Gates got up and stomped out of the room in front of everybody in a spectacularly rude manner.’[2][3]

Javelin, a spreadsheet for DOS that can simulate multidimensional views of data, was more a modelling program than a spreadsheet and was the forerunner of today’s OLAP databases, which are inherently designed for multiple dimensions.[2]

It surely looked as if IT moved into the right direction, although when I in 1987, after utilising VisiCalc and Lotus 1-2-3 for a number of years (developing automated reporting and consolidation systems), bought a copy of Javelin, the sales person remarked: ‘A great product, but South Africa is not ready for it yet.’ These words became prophetic, although she should have said, ‘The world is not ready for it yet and will not be for many years …’

Rob Firmin, who conceived the Javelin idea, managed to address the main reason why spreadsheets were preferred above databases ‒ databases were regarded to be complex to build, you had to be an IT specialist (with knowledge of variables, fields and dimensions). In Javelin, after typing variable names, scenario and time dimensions, and even entity names in the borders (without cell references), simply by entering a value for the variable, a database is created.

Unlike data contained in cells in a spreadsheet, Javelin models are built on objects called variables. For example, a time series, or any variable, is an object in itself, not a collection of cells that happen to appear in a row or column. Variables have many attributes, including complete awareness of their connections to all other variables, data references, and text and image notes. Calculations are performed on these objects, as opposed to a range of cells, thus adding two time series automatically aligns them in calendar time, or in a user-defined period. Data is independent of worksheets ‒ variables, and therefore data, cannot be destroyed by deleting a row, column or even an entire worksheet. A complex model can be dissected and understood by others who had no role in its creation, and this remains unique even today.

Other products such as Lotus’s Improv later used some parts of Javelin’s approach.[1]

For many years, we developed fully automated budgeting/forecasting, reporting, consolidation and analysis systems, utilising Javelin’s powerful features and brilliant logic. Corporate clients used some of these systems for over 20 years.

In the meantime, Microsoft Excel, developed by Microsoft for Windows, became a very widely applied spreadsheet tool and replaced Lotus 1-2-3 as the industry standard for spreadsheets.

Microsoft Excel has the basic features of all spreadsheets, using a grid of cells arranged in alphanumeric columns and rows to organise data manipulations like arithmetic operations. Excel was not designed to be used as a database, and that is where the problems lie.

Tim Worstall, Fellow at the Adam Smith Institute and Forbes contributor, called Microsoft Excel ‘the most dangerous software on the planet’. According to Worstall, spreadsheet-heavy software like Excel is too difficult to manage. ‘It’s handled in such a slapdash manner that no one is really on top of it anymore.’ A lack of controls, inaccurate information, and manually copy-pasted numbers within spreadsheets are too often to blame for financial errors. Worstall’s essay was published in 2013, and years after studies from the University of Hawaii found 88% of spreadsheets audited over 13 years were riddled with errors. Businesses are still making dangerous mistakes.[4]

Doug Klunder, the lead developer of Excel, still considers it a powerful tool. But he harbours no illusions about how it can be abused. ‘It’s the same thing with PowerPoint ‒ Excel lets things look professional, and people assume there’s substance behind it.’[5]

When spreadsheet software was first introduced, it put one of the greatest productivity tools ever devised into the hands of business professionals. Even today, three decades later, the spreadsheet is still widely used for its ability to tackle the routine analyses needed by most organisations.

What does business really need?

However, as organisations and markets are becoming increasingly complex, many people are finding it necessary to tackle larger and more sophisticated tasks.

What are the key facilities that they require?

•The disciplines and power of traditional modelling systems within easy reach

At which point should one step up from the traditional spreadsheet?

Traditional spreadsheets will always be useful for basic calculations in worksheet tables for which they were designed. However, a spreadsheet replacement product should be considered when users have outgrown spreadsheets due to the complexity and volume of the workload involved during budgeting, forecasting, etc.

When a large amount of data needs to be imported/inputted/calculated, over time-periods (months, years), for a number of entities, you need a system that knows the What, When, Whom and the Where of the data.

Sophisticated financial modelling tools are available that combines the ease-of-use of a spreadsheet with the power of database query tools ‒ software designed to replace the patchwork of spreadsheets, independent databases, manual cutting and pasting, and ad hoc tools that have become unwieldy, error prone and costly.

When DOS operating systems became something of the past, we found a great replacement product for Javelin in a modelling tool named PowerPlan ‒ a fully integrated enterprise-wide budgeting, multi-dimensional analysis and reporting system.

It takes the ease-of-use of a spreadsheet, grafts it to the robustness of a database, and then adds the rich features you need to perform business analysis. Information is naturally consolidated with the ability to drill down to show greater and greater levels of detail, finally displaying the transactions that explain your variances.

As more accounting professionals step up from the traditional spreadsheet to sophisticated financial modelling tools, the more we would be seen as normal, logical thinking and interesting human beings!