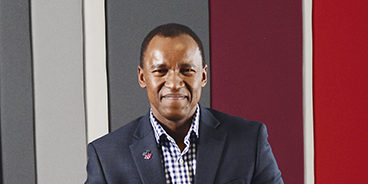 Dion Shango takes the questions of trust and accountability very seriously. ‘Now, more than ever, CAs(SA) have a responsibility to show leadership, be vigilant and speak up on the importance of trust and good governance,’ he says.

As the first black African partner to be appointed as Chief Executive Officer of PwC Southern Africa two years ago, at the age of only 39, Shango has built his career on accountability and trust. ‘As the traditional custodians of all things trust-related, we now need to shoulder the responsibility and become a beacon as the custodians of trust,’ he says.

While he admits that when he joined PwC 18 years ago he could not have foreseen a time when he would become the firm’s Southern African CEO, he says he has been blessed with the opportunities he’s been given. Now, he aims to leverage the role to help grow the business and its people as well as contributing to positive change for clients and the country as a whole.

Changing a country is a big job, but Shango believes it’s a crucial one that can be achieved through the collaborative efforts of all stakeholders. As one of them, he is prepared to shoulder his weight, starting by helping drive transformation within the firm and the sector.

Rising to the top

Shango’s collaborative attitude, patience and perseverance, as well as having strong mentors and good opportunities, lie behind his own career success, he says. Having settled on a career in accounting, because it ‘sounded like a nice, solid dependable occupation’, Shango secured a bursary from Coopers & Lybrand (which later merged with Price Waterhouse to form PwC) to study at the University of Pretoria. He has never doubted his career choice. ‘I have been blessed by the type of opportunities that have been thrown my way over the years. I have never considered myself to be the smartest   in our peer group, but the skill that has stood me in good stead is my ability to establish and build relationships with people.’

This ability to engage and collaborate, as well as his diligence, saw him working his way up to partner.

‘I would have been perfectly happy to be admitted as a partner and manage my career on that basis,’ he says. ‘But after I was admitted in 2008, one of my mentors, now PwC Africa CEO Hein Boegman, began a process of identifying people who could one day be appointed as regional senior partner. I was one of a handful of partners identified as possible candidates. In the end, I was lucky enough to be offered the role. The rest, as they say, is history. It’s a true honour and an incredible learning experience for me,’ he says.

A will to drive change

Describing himself as a ‘middle-of-the-road’, dependable team player, Shango quickly reveals a quietly passionate activist side. ‘I’m not naïve,’ he says, acknowledging the challenges South Africa faces on several fronts – including governance, trust, economic stagnation and high levels of unemployment. ‘We face massive challenges and we all need to step up. These are problems we all face, and we need to become accountable for overcoming them.’

Shango believes South African business, individuals and particularly CAs(SA), have an important role to play in overcoming the myriad challenges the country faces, and he is not shying away from emerging from his comfort zone to help drive positive change.

‘It is a challenging environment that we find ourselves in. Business models are challenged, strategies are being stretched and flexed to the maximum, and the simple task of planning for the next six months, let alone for the next three or five years, has just become so complicated,’ Shango says.

‘As a result, you see this paralysis that seems to have engulfed corporate South Africa, whereby cash balances are growing and growing, and nobody seems to want to invest. On the one hand, the government says “we have created an enabling environment that allows you to invest”, and, on the other hand, business says “we disagree”. In many industries – like mining – we don’t have policy certainty. And business says we don’t condone the way politics are being managed; there are perceptions of corruption and cronyism, so business does not see conditions conducive for investment.’

‘So you have this deadlock and you wonder what it’s going to take to unlock it. The unfortunate consequence is the two-headed problem of a no growth economy and an ever-ballooning unemployment rate, currently measured at 27%. This is a ticking time bomb, in my mind. There’s no way you can run a successful and sustainable country with an employment rate that high. Something has to give, and we really need to do something to lower that unemployment rate.’

If he had the power to change the situation, he says, he would reignite the programmes that started gaining momentum last year. ‘During 2016, we started seeing signs of the relationship between government, business and labour beginning to change, mostly through the interventions of the previous Finance Minister, Pravin Gordhan. But as the progress was gaining momentum, the Minister was removed from the position and that progress slowed significantly. Given all the power, I’d seek to restore that relationship and ensure that some of the outcomes that were starting to be reported, such as the creation of an unemployment fund and small business fund, start delivering tangible results.’

South Africa’s challenges are worrying, he says. ‘We’ve been talking for far too long: we need to start seeing more action. There’s going to have to be some pain. The very large corporations in this country will have to bear some of the cost of shifting the needle in terms of unemployment. My contention is that this is a shared problem, that requires all of us to bear the cost of resolving. And I would argue that we should all see it not as a cost but rather an investment in our future,’ Shango says.

CAs(SA) as a beacon of trust

‘At the risk of sounding arrogant, one often gets the impression that the world out there thinks CAs(SA) can move mountains. That puts an incredible amount of responsibility on us. Rightly or wrongly, a certain level of expectation has been attached to this qualification in this country: it’s extremely difficult to qualify as a CA(SA) and they are among the highest remunerated professions in the country. So whether we like it or not, we are seen as something of an elite group, and I think there’s a certain level of responsibility that comes with such a position,’ he says.

‘We must demonstrate to not only this country but to the world, which finds itself in the middle of a trust deficit, that trust can be restored. We need to be vocal, we need to be proud of what we stand for, make sure that society knows what we stand for, and do everything in our power to contribute towards a society that has trust embedded in it and appreciates the principles of good governance.’

This means moving out from behind the desk and out of traditional comfort zones. ‘I think we need to be a lot more active in how we engage with other stakeholders and other actors within society, not only government and politicians but also stakeholders we previously never thought of having a relationship with – regulators, labour unions, civil society and church organisations. The problems that face our country today require all of us to be united and to reach out to as many people as possible to try and make a change.’

Teamwork is an ongoing theme in Shango’s life. Growing up in Mamelodi and Pretoria, he was a keen sportsman and played cricket, rugby, football and hockey. While work has put paid to most of his sports activities, he is still game to take part in events such as his son’s school parents’ association seven-a-side football challenge. In addition, he does venture onto the golf course from time to time and has also tried his hand at mountain biking.

This team approach has also shaped his career, Shango says. ‘While I am a dependable, consultative person, I do like to think of myself as open minded, and fairly balanced in how I view things – so if there’s a position of conflict, I always try and challenge myself to see the other side. My personality lends itself to being approachable.’

So approachable, in fact, that his staff confirm that Shango seldom declines meeting requests, making his diary a nightmare to manage.

Collaboration, being mentored, and mentoring others, is vitally important, he believes, and as a leader, he seeks to pass on the exposure and experience that helped build his own career.

‘Our people look to us for inspiration and guidance, leadership and certainty, and in some sense, they look to us when they don’t know what to do. And we have a role to do our best to offer and provide all of those things. The difficult thing about leadership, and I still continue to learn that to this day, is that you won’t always have the answers. In such circumstances, the most important thing that I do is to actually concede and admit to the person that I don’t have the answer, but   that if the two of us work together towards a solution, there is no challenge that cannot be overcome.’

And many challenges lie ahead, he notes. The stereotype of what an auditor or accountant represents is changing; the sector is confronted with a fast-changing world and technologies that raise questions of whether the existence of the profession is under threat. ‘Partnerships, team work and collaboration come back into play here,’ he says. ‘Human interaction is something our clients value the most. Our clients turn to us in times of uncertainty when they are trying to shape their own theories about the type of risks that lie on the horizon and that they need to be planning for. I strongly believe no machine or robot would be able to offer this.’