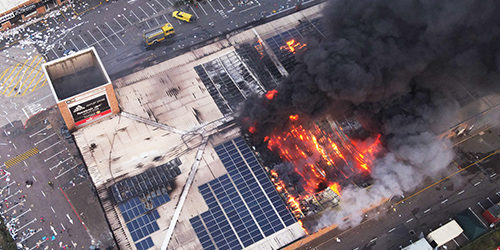 The civil commotion that tore through areas of KwaZulu-Natal and Gauteng in July 2021 caused damage to business and individual assets totalling billions of rand. But those fortunate enough to have insurance soon realised that claiming for losses caused by civil commotion, public disorder and riot was different to the run of the mill risks they usually claimed for.

Cover for loss or damage due to civil commotion, public disorder and riots (whether politically motivated or not) is almost exclusively available from the state-owned special risks insurer Sasria SOC Limited. And this cover, called a Sasria Coupon, can only be offered as an add-on to your primary insurance contract.

South Africa’s non-life insurers act as non-mandated agents of Sasria and are responsible for issuing these coupons and collecting your premiums on Sasria’s behalf. In practice, your broker or primary insurer will include Sasria cover alongside the assets cover on your commercial or personal insurance policy. The insurer then acts as the go-between between you (the insured) and Sasria in the event of a loss.
By way of example, consider a business that has a commercial insurance policy including Sasria cover for its buildings and vehicles. In the event that one of its drivers has an accident in the normal course of business, it will lodge a claim with the broker, who will assist with registering the claim with the insurer. The insurer will then assess the claim and compensate the business for the damage.

If, however, the vehicle is torched during civil commotion, the claim must be lodged by the insurer with Sasria. In this case the business, again assisted by the broker, will notify its primary insurer of the incident. The insurer will then follow Sasria’s guidelines to register the claim with the special risks insurer. Sasria is then responsible for assessing and paying out these claims.

Sasria can mandate its agents to settle claims on its behalf. As claims volumes soared following the recent unrest, they gave permission to their agents (your insurer) to settle amounts of up to R50 000 on claims relating to civil commotion, subject to all conditions met. Assessors and loss adjusters would still have to be appointed for higher value claims, in line with the special risk insurer’s mandates.
The basic conditions and principles of insurance apply to Sasria cover in much the same way they would apply to an ordinary insurance policy. This means that you (the insured) will still have to prove ownerships of the goods, that large losses will have to be properly assessed and loss adjusted and that the sums insured on the original policy, and by implication the Sasria insurance, are adequate.

The complexities in South Africa’s special risks insurance environment illustrate the benefit of broker advice when entering into a non-life insurance contract, especially for businesses. The FIA encourages all consumers to approach experienced, professional brokers when transacting for insurance, because there is nothing worse than suffering a catastrophic loss only to discover that you are not covered for the risk event.