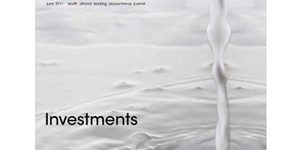 From the pen Investments

In this issue we deal with the question of investments. How it can potentially grow our economy and how to define and plan for it, and we also identify the hotspot for future investments: Africa.

Sentiments about our continent, over the past few decades, have transitioned from the loathsome explorer age cries of  ‘Deep dark Africa’ to the somewhat more realistic sentiments of ‘Rich Africa, Poor Africans’ to what the world now calls ‘Africa – your time has come’. But if you’re from this continent, then these sentiments are just that, sentiments. Because Africans have intuitively known for decades that our continent with its rich natural resources, is an untapped investor haven. And as Achim Steiner, Executive Director of the UN Environmental programme told Africa ministers of finance, planning and economic development gathered in Ethiopia earlier this year, “This continent is in many ways the envy of the 21st century world. (As) Africa is rich in the kinds of natural resources that in many parts of the world have been over-exploited and diminished by centuries of unsustainable development”.

And The Africa Competitiveness Report (ACR) 2011, the third report jointly published by the World Economic Forum, The African Development Bank and the World Bank, agrees. It states in its opening remarks that Africa’s recovery from the global economic crisis has been faster than it has been in many other parts of the world. ‘Indeed, Africa has seen what can be termed an “economic resurgence” over the past decade: between 2001 and 2010, gross domestic product growth on the continent averaged 5.2 percent annually – a rate also expected in 2011, and almost 25 percent greater than the global average of 4.2 percent.’

But, I’m realistically optimistic that Africa’s time has surely come. And, unlike other commentators, I believe that our continent’s slow pace of development, even our colonial past and despotic rule may just have been a necessary cog to ensure that, after a crippling financial and looming environmental crisis, that at least one continent still has untapped resources to help impact growth of the global economy.

So, as the private and public sector begins to consider and consolidate their investment options going forward, the question many pundits agree remains to be asked is: “How will investors respond to Africa’s potential given its complex political, social and economic challenges?”

What we as Africans intuitively know is that, without an investment into our wonderful people of Africa, the true potential of Africa will remain untapped.