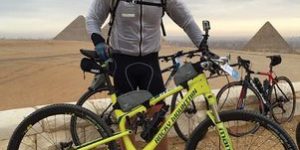 As a trainee you know all about going the extra mile and doing extraordinary things. How you sometimes feel like giving up and just let it all go …

SAICA and Sage Pastel are proud to be associated with South African actor Ivan Zimmermann, who embarked on a continent-long mountain biking journey from Cairo on 9 January 2015. If all goes according to plan, he will be arriving in Cape Town on 9 May 2015 as part of the Tour d’Afrique 2015.

SAICA is running a trainee motivational campaign – Leaders Never Quit – in conjunction with the Tour d’Afrique 2015. The campaign theme reflects the fact that entering into a training contract as a prospective CA(SA) is rigorous and not for the faint-hearted. It takes long hours, mental anguish and even tears to qualify as a CA(SA). Similarly, riding on a mountain bike from Cairo to Cape Town also takes blood, sweat and tears. Some will even say it is madness. Both these seemingly diverse activities therefore share the common traits of commitment and dedication.

Through this initiative, we would like to see you, our SAICA trainees, get involved in this campaign and share your commitment and dedication with Ivan by motivating him to succeed.

In turn he has agreed to motivate you on your journey to becoming CAs(SA). Ivan also plans to raise 12 000 cans of food for the Can-a-Kilo initiative as part of this adventure.

The canned food will be distributed by the Hanna Charity and Empowerment Foundation in South Africa. Collection points for the cans can be found on Ivan Zimmermann’s website. You may also drop off cans at the SAICA Head Office, 7 Zulberg Close, Bruma Lake, or any of our regional offices.

Remember to follow Ivan’s journey on Twitter and to send him motivational tweets. You will stand a chance to win great prizes by motivating Ivan on Twitter using #leadersneverquit or by posting a TwitPic of you donating cans of food towards Can-a-Kilo.

For the next 14 weeks there are 42 prizes to be won and at the end of the tour, Ivan will select the person who motivated him the most. That person will win the grand prize of a solar power system worth R90 000.

Be sure to follow Ivan’s journey on the following platforms:

12 000 km in four months, The Tour d’Afrique has been recognised as the world’s longest and most challenging mountain bike stage adventure. This will be the 13th edition of the Tour d’Afrique – a test of mind, body, and bicycle that will cover ten countries.

During the journey Ivan will share his ten key leadership lessons during the different stages of the race.

Look out for updates on our website and social media channels. We will follow the journey with you and keep you updated. And remember, leaders never quit.

Photos: 1)  Ivan arrives at camp on day 3; 2) Setting up camp between ruins in Egypt; 3) Ivan at the start of the journey in from of the pyramids in Egypt; 4) Ivan adoms up his bike with an Egyptian seat cover; 5) Enjoying a well-deserved rest after the first shower in 4 days; 6) In the first few weeks they were riding in touch conditions in the desert: setting up camp in the middle of nowhere;  7) The support vehicles that ensure eveything goes according to plan 8) Getting a lift from a local to visit some temples; 9) Ivan in on the banks of the Nile River; 10) A beautiful sunset in the desert.