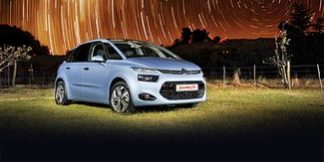 Jaguar has broken all its own design norms to come up with a modern classic in the form of the all-new XJ, while Citroën combines comfort and apps in the new Picasso

The French have been known for making cars that are different to the norm: in fact, some may say that they push the boundaries of commonality and like to do things differently. The C4 Picasso is no exception. This vehicle has changed the opinion that MPVs have to be boxy. The Picasso has always had rounded edges and elongated angles.

This latest version of the Picasso continues this vision. The front of the vehicle has a steeply raked windscreen that extends into the roof. The bonnet is neatly sculptured with neat creases on either side, giving the car an elegant look. The now famous grill has an elongated chrome section that almost looks like eyebrows over the daylight running lights. Just below these slim LED running lights is the actual headlight cluster, which is neatly moulded into the bumper that extends over the entire front end. The bumper is split by a high-gloss beam with chrome surrounds while the lower section is covered in mesh. This makes the vehicle look more car than MPV.

From the side view, the extended glass that intrudes into the A and C pillars distinguishes this from almost any other vehicle. Not only does it look interesting, but it adds to the overall visibility for the driver. The rear end is very neat;  it resembles a premium hatchback instead of an MPV. The rear-light cluster has U-shaped lights that are underlined by the indicator lights. There is a small bumper section that incorporates the rear fog lights, etc. The rest of the rear comprises the large boot or fifth door that opens to facilitate loading. The wider stance and lower front end lend the vehicle a unique presence and improve road holding.

Inside the C4 Picasso is when you realise that this is no ordinary vehicle. The two-tone dashboard looks like Picasso himself designed it. The use of a touchscreen display to control the infotainment and ventilation systems reduces the need for tonnes of buttons and knobs. This gives a clean and fresh look to the dashboard. A larger screen has been recessed into the top section of the dashboard. This is for navigation, park distance, rear view camera, speed, engine temperature and all other information that may be useful to the driver. This screen is centrally mounted, which means that there is no obstruction in front of the driver. This does take getting used to.

This vehicle is aimed at families, and the one thing all families need is practicality and space. This car has both. There are pockets and cubby sections everywhere in the vehicle: from the lower section in the dashboard to below the rear-seat passenger wells. The seats have a wave pattern running through them to add some pizazz. The three individual rear seats move independently, ensuring that the number of complaints from the rear is reduced. The driver’s seat is comfortable and can be adjusted to match any driver’s requirements. This is usually the best seat in the car, but this is not the case in the Picasso. The best seat in the house is the front passenger seat. Over and above what the driver’s seat offers, the passenger seat has a footrest that can be lifted at the touch of a button. This makes you feel like you are in a first or business class seat on a plane.

The engineers at Citroën have also improved the soundproofing and quietness of the engine, which means the passengers will really feel like they’re in a plane, with one difference – much better visibility. This is thanks to the large windows and windscreen. Added to this, the windscreen cover which houses the sun visors can be moved back a few centimetres, creating the impression that you are sitting in a glass bubble.

On the road, the vehicle drives well and is easy to manoeuvre. Parking is a synch too, thanks again to the large windows and the parking aids. This is no street racer, but rather a relaxed vehicle that will transport you, your family and all they want to take with in a calm and relaxed environment. It’s almost a Zen vehicle to me. Well done, Citroën, this is going to be a hard act to beat.

The Jaguar XJ series has always had a classical styling that some would call safe. Since Jaguar has been taken over by Tata, considerable changes have been made to the Jaguar range. The new XJ has taken this revision of design to a higher level. The front end of the car still has the classical look, but now has a chiselled bonnet and an edgy mesh grill. The headlights have a similar look to those of the smaller XF, but have been well carved into the longer XJ model. The side view exudes elegance and aristocracy with its sweeping rear end and floating roof finish. The most controversial view has to be the rear end. The L-shaped rear lights run from the back over to the top section of the boot. This makes the boot look smaller, but more importantly gives the vehicle an appearance that is unmistakable from any other vehicle on the road.

The interior is no different. All the features that make a Jaguar a premium vehicle are still there, so you still get an interior that oozes luxury and opulence. The plush leather-covered seats make you feel like you are sitting in your favourite arm-chair, with its body-hugging contours and support in all the right places. The centre console that would normally house the famous U-shaped gearbox control now houses a simple dial that rises when the car is started. All you need to do is turn the knob to the required mode – Drive, Neutral, Reverse or Park. As you go up the centre console, you are welcomed by a touchscreen infotainment system that is simple to use. The entire driver’s console is also a screen that comes to life as you depress the stop/start button. The display illuminates with crisp-clarity three dials that feature the speedometer, rev counter, and one for the fuel and temperature gauge and the Jaguar logo. Needless to say, these dials are typical Jaguar, classy and stylish. The dashboard sports the trademark circular ventilation ducts and between the front two, there is a classical analogue watch.

As this vehicle may not always be driven by the owner, the rear seats are just as comfy and have ample legroom even for the fussiest backseat driver. But if you require more space, you can always opt for the LWB version. The panoramic glass roof has a sunroof that opens above the front passengers. For the rear passengers there is a covering that opens to expose the glass. This adds to the openness of the cabin but does let in the harsh South African sun on a hot afternoon.

The new two-litre turbo-charged engine produces a healthy 177 kW, which is sufficient to propel the vehicle to 100 km/h in 7,5 seconds and going to a top speed of 241 km/h. So, it has ample power even for its size. On the road, the vehicle is easy to drive and the visibility is excellent all round. This is all possible thanks to the lightweight aluminium body and the new innovative technology featured in the car. The suspension set-up is soft so you don’t feel the bumps in the road and the sound proofing has made in possible for one to have a conversation with the rear-seat passengers without needing to raise your voice.

Overall this new XJ has changed the view of the large Jaguar to the world. The modern styling on this new XJ may not be liked by all and some of the Jaguar purists may disapprove, but this has definitely brought the XJ to the modern age in style. Most importantly, it’s all heart Jaguar.

Author:  Torque Talk is a member of SAGMJ