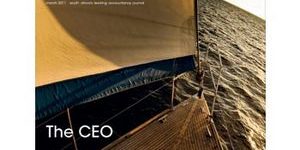 At a recent AU meeting, French President, Nicolas Sarkozy, warned that the world needs to take a different look at leadership today. “In today’s world, one can no longer govern the same way as in the world of yesterday. Either this change is inflicted upon you, in which case you leave the door open, one day or another, to violence, or you anticipate and guide it, and it can take place without clashes, without rifts, and without opening the door to all kinds of unpredictable events.”

Wiser words have not been spoken when dealing with the issue of leadership. No-one, regardless of the political and economic divides that threaten to separate us daily, will deny that leadership holds the power to build or strip down nations and economies. And while leadership is very subjective, there can be no doubt that, when people feel exploited, persecuted, ignored, done-in, unrewarded, unmotivated or directionless, ‘bad’ leadership, whether at your local cbo, local municipality, small practice or big business, is at the core.

But again, that’s very subjective. Were the staff at Enron ‘unhappy and unmotivated’? We know from personal interviews and reports post Enron, that the staff , by and large, were unsuspecting and reasonably happy employees. But no-one would argue that some bad decisions were made as a result of bad leadership.

In this issue we profile David Brown, who, for all intents and  purposes, has been lauded as a ‘good’ leader as he steers one of the top two platinum mining companies in the world and he did so relatively better than most mine bosses through the recent economic crisis. His vision for the company and his workforce is re-affirmed every year through key focus areas, but he still comes up against criticisms from the national union of mines for what they consider an ‘overly concentrated focus on the bottom line’ as opposed to the conditions of employment for the underground labourers. So while Impala Platinum Ltd displays all the signs of a well run business with good leadership, some may beg to differ.

Leadership is subjective, and good leadership more so. As we turn our attention in this issue to the work of the CEO, the debates that rage around remuneration, the challenges CEOs face in terms of new ways of doing business, succession planning and a new technological age,  who is really to say what defines good leadership.